Trump and Netanyahu thought they were pulling a fast one on two U.S. congresswomen, but it has blown up in their faces, as Marjorie Cohn explains.

During Congress’s August recess, a group of 41 Democratic and 31 Republican congressmembers traveled to Israel on a delegation sponsored by American Israel Public Affairs Committee (AIPAC). AIPAC subsidizes congressional trips to Israel in order to further the “special relationship” between Israel and the United States.

Israel is the largest recipient of U.S. military aid: $3.8 billion annually. AIPAC is the chief Israel lobby in the United States and a consistent apologist for Israel’s oppressive policies toward the Palestinians.

Reps. Rashida Tlaib and Ilhan Omar, the first two Muslim women elected to Congress, had planned their own “Delegation to Palestine,” scheduled to begin on August 17. Tlaib, who was born in the U.S., planned to travel to the West Bank to visit her 90-year old Palestinian grandmother, whom she hasn’t seen for a decade. But, aided and abetted by Donald Trump, Israel withdrew permission for the trip unless Tlaib agreed to remain silent about Israel’s mistreatment of the Palestinians. She refused to abide by the gag order and the trip was cancelled.

Tlaib said in a statement, “Visiting my grandmother under these oppressive conditions meant to humiliate me would break my grandmother’s heart. Silencing me with treatment to make me feel less-than is not what she wants for me – it would kill a piece of me that always stands up against racism and injustice.” She added, “Being silent and not condemning the human rights violations of the Israeli government is a disservice to all who live there, including my incredibly strong and loving grandmother.” 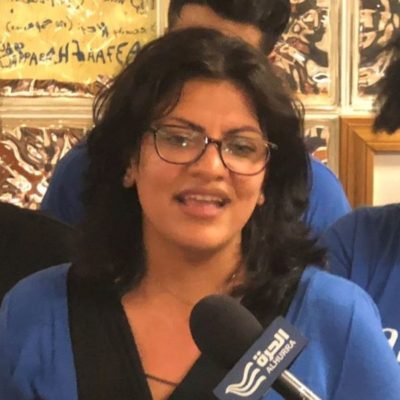 Tlaib during her campaign. (Wikimedia)

Israel’s refusal to allow members of the U.S. Congress entry into Israel-Palestine without muzzling them backfired. It has garnered widespread criticism, even by AIPAC, and focused the national discourse on the Boycott, Divestment and Sanctions Movement (BDS), which Tlaib and Omar support.

Omar, a member of the House Foreign Affairs Committee, said, “It is my belief that as legislators, we have an obligation to see the reality there for ourselves. We have a responsibility to conduct oversight over our government’s foreign policy and what happens with the millions of dollars we send in aid.” She says the U.S. must ask Netanyahu’s government to “stop the expansion of settlements on Palestinian land and ensure full rights for Palestinians if we are to give them aid.”

Sen. Bernie Sanders said, “The idea that a member of the United States Congress cannot visit a nation which, by the way, we support to the tune of billions and billions of dollars is clearly an outrage,” adding, “And if Israel doesn’t want members of the United States Congress to visit their country to get a firsthand look at what’s going on … maybe [Netanyahu] can respectfully decline the billions of dollars that we give to Israel.”

Tlaib and Omar were scheduled to meet with members of the Israeli Knesset (Parliament) and Palestinian and leftist Israeli activists and nonprofits, as well as international human rights organizations in Jerusalem and the West Bank. They were also set to confer with members of Breaking the Silence, a group of former members of the Israel Defense Forces who now actively oppose Israel’s occupation of Palestinian lands. Omar tweeted that the goal of the delegation “was to witness firsthand what is happening on the ground in Palestine and hear from stakeholders —our job as Members of Congress.” 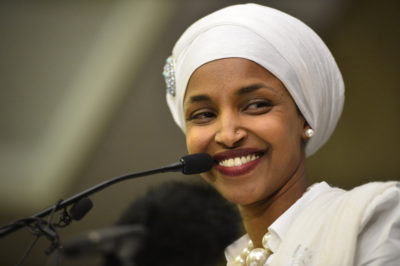 Israel had approved the Tlaib/Omar trip last month. Israeli Ambassador to the U.S. Ron Dermer said, “Out of respect for the U.S. Congress and the great alliance between Israel and America,” Israel would not deny entry “to any member of Congress.”

But Donald Trump reportedly told several of his advisers that Prime Minister Benjamin Netanyahu should bar Tlaib and Omar because they supported BDS. Hours after Israel cancelled the trip, Trump tweeted, “It would show great weakness if Israel allowed Rep. Omar and Rep. Tlaib to visit. They hate Israel & all Jewish people.”

The Israeli government agreed to allow Tlaib to visit her grandmother, provided she agree in writing not to discuss her support for BDS. But after emotional conversations with her family, Tlaib refused to submit to the condition that she not discuss the Israeli occupation.

Tlaib “was forced to make a choice between her right to visit her grandmother and her right to political speech against Israeli oppression,” Sandra Tamari wrote at In These Times. Tamari has been barred from seeing her family in Palestine for more than 10 years because of her advocacy for Palestinian freedom and justice. Tlaib “ultimately chose the collective over the personal: She refused Israel’s demeaning conditions that would have granted her a ‘humanitarian’ exception to enter Palestine, so long as she refrained from advocating for a boycott of Israel during her visit,” Tamari added.

What Is the BDS Movement?

BDS is a nonviolent movement for social change in the tradition of boycotts of South Africa and the southern United States. It is aimed at ending Israel’s illegal occupation. In 1967, Israel took control of Gaza, the West Bank, East Jerusalem and the Golan Heights by military force. UN Security Council Resolution 242 describes “the inadmissibility of the acquisition of territory by war” and calls for the “withdrawal of Israel armed forces from territories occupied in the [1967] conflict.” 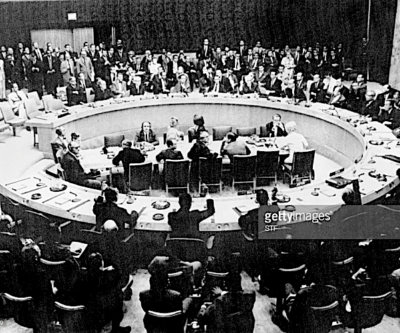 Israel’s 2014 massacre in Gaza led to the deaths of 2,251 Palestinians, including 1,462 civilians, and the wounding of 11,231 Palestinians. These actions likely constituted war crimes, according to the UN Human Rights Council’s independent, international commission of inquiry.

Former UN deputy high commissioner for human rights, Flavia Pansieri, said that human rights violations “fuel and shape the conflict” in the occupied Palestinian territories and “[h]uman rights violations in the West Bank, including East Jerusalem, are both cause and consequence of the military occupation and ongoing violence, in a bitter cyclical process with wider implications for peace and security in the region.”

Nobel Peace Prize winner Archbishop Desmond Tutu of South Africa, writing in the Tampa Bay Times, cited the 2010 Human Rights Watch report which “describes the two-tier system of laws, rules, and services that Israel operates for the two populations in areas in the West Bank under its exclusive control, which provide preferential services, development, and benefits for Jewish settlers while imposing harsh conditions on Palestinians.” Tutu wrote, “This, in my book, is apartheid. It is untenable.”

The call for BDS describes boycotts, divestment and sanctions as “non-violent punitive measures” that should last until Israel fully complies with international law by (1) ending its occupation and colonization of all Arab lands and dismantling the barrier wall; (2) recognizing the fundamental rights of the Arab-Palestinian citizens of Israel to full equality; and (3) respecting, protecting and promoting the rights of Palestinian refugees to return to their land as stipulated in United Nations General Assembly Resolution 194.

What Are Boycotts, Divestment and Sanctions?

Boycotts encompass the withdrawal of support for Israel and Israeli and international companies which are violating Palestinian human rights, including Israeli sporting, cultural and academic institutions.

The BDS movement has had a major impact on Israel. BDS was a critical factor in the 46 percent reduction in foreign direct investment in Israel in 2014, according to the United Nations Conference on Trade and Development. Individuals and entities who have heeded the call for divestment include George Soros, the Bill Gates Foundation, TIAA-CREF public sector pension fund, Dutch pension giant PGGM and Norwegian bank Nordea. 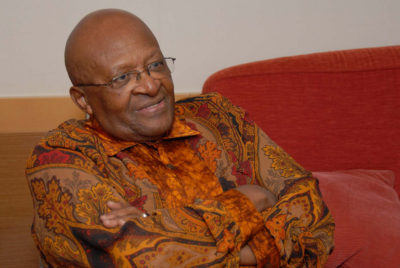 Several churches, including the United Methodist Church, the Presbyterian Church USA, the United Church of Christ and many Quaker meetings, have divested from companies the BDS movement has targeted. The security services company G4S is planning to sell its subsidiary in Israel because the Stop G4S campaign resulted in a loss of millions of dollars in contracts. The withdrawal of French multinational utility company Veolia from Israel led to billions of dollars in lost contracts.

Tutu, who finds striking parallels between apartheid South Africa and Israel’s oppression of the Palestinians, supports BDS. He has called on “people and organizations of conscience to divest from … Caterpillar, Motorola Solutions and Hewlett Packard,” which profit “from the occupation and subjugation of Palestinians.”

In banning Tlaib and Omar, Israel relied on its 2017 law prohibiting entry to any non-Israeli citizen who “has knowingly published a public call to engage in a boycott” against Israel “or has made a commitment to participate in such a boycott.”

And the United States’ overwhelming support for Israel is reflected in a resolution the House of Representatives adopted on July 23. H. Res. 246, which passed easily on a 398-17 vote, opposes the BDS movement. Tlaib and Omar voted against the resolution.

Interestingly, although the Republicans on the AIPAC trip tweeted vociferously about their visit, there was near silence on Twitter from the Democratic members of the delegation, although the group had given Netanyahu a standing ovation. “The absence of chatter from the Democrats obviously reflects the misgivings that the Democratic base has about the special relationship between the U.S. and Israel,” Philip Weiss and Michael Arria wrote at Mondoweiss. “A recent survey shows that a majority of Democrats support sanctions against Israel over settlements, even as the House votes overwhelmingly to condemn the Boycott, Divestment and Sanctions campaign.”

The outrageous exclusion of members of Congress from Israel-Palestine has focused unprecedented attention on the Israeli occupation and the BDS movement. This is the time to pressure congressional representatives to rethink their uncritical support for Israel and the $3.8 billion annually the United States provides to Israel.

Marjorie Cohn is professor emerita at Thomas Jefferson School of Law, former president of the National Lawyers Guild, deputy secretary general of the International Association of Democratic Lawyers and a member of the advisory board of Veterans for Peace. She is a contributor to the new book, Reclaiming Judaism From Zionism: Stories of Personal Transformation.
Before commenting please read Robert Parry’s Comment Policy. Allegations unsupported by facts, gross or misleading factual errors and ad hominem attacks, and abusive language toward other commenters or our writers will be removed.
Post Views: 203