As one door  bangs shut in Kashmir, another opens in Argentina, writes Vijay Prashad. 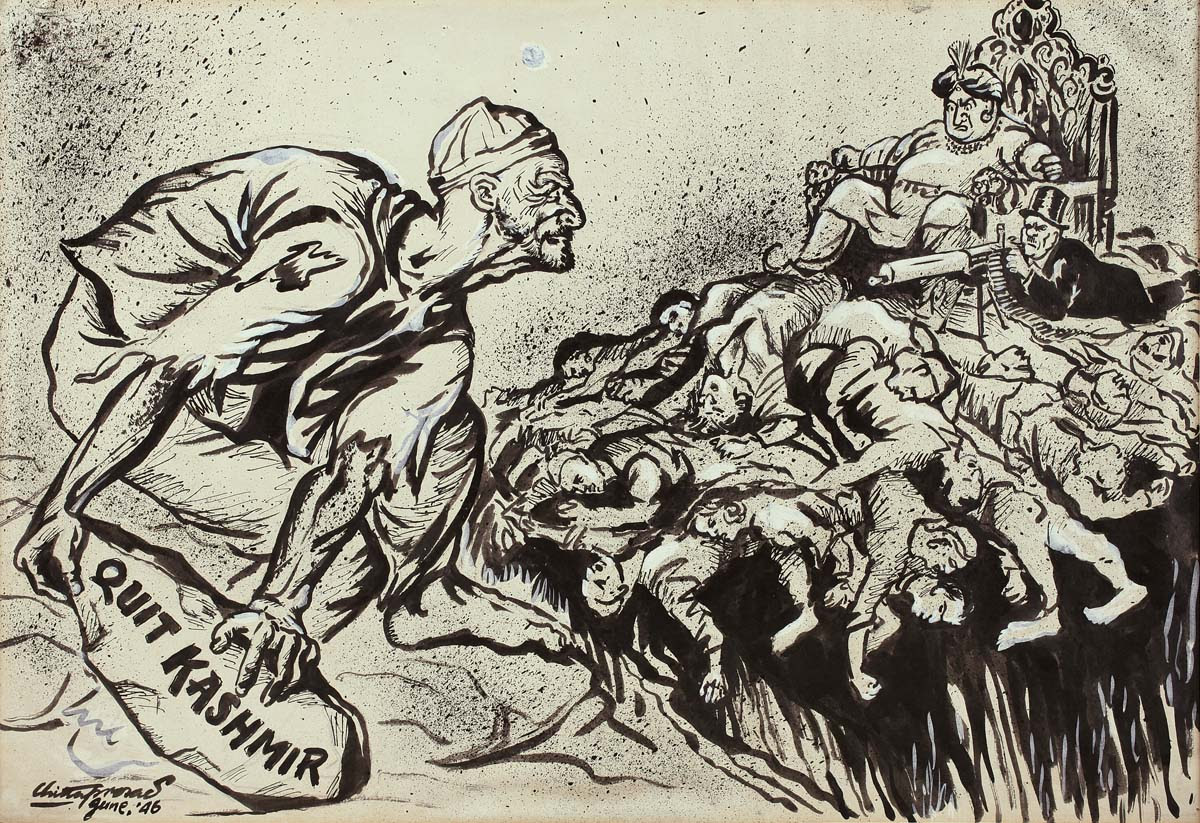 As one door sharply bangs shut in Kashmir, another opens in Argentina. That is the nature of our struggles. In 1859, Friedrich Engels wrote, “History often proceeds by jumps and zig-zags.” To imagine history as linear, moving in a progressive direction, is bewilderingly incorrect. It is romantic to believe either that history is conservatively circular – so that change is fundamentally impossible – or that history is progressively linear – so that everything improves in a scientific manner. Neither is plausible.
Human history is a struggle between the imagination for a better life and the constraints of the present. Some of these constraints are material, and some are social. Inadequate material conditions and the rigidities of class can hold back human progress.

The undemocratic attack on the people of Kashmir comes at the same time as the people of Argentina voted in their primary to overwhelmingly say that they are fed up with the politics of austerity (please see our Dossier no. 10 from November 2018 on the crisis in Argentina and the role of the IMF). Argentina’s population will vote again in October. By all indications, they will throw out President Mauricio Macri. Musicians and militants in Argentina have taken the old Italian partisan ballad, “Bella Ciao,” (“Goodbye Beautiful”) and refashioned it as a cry against neoliberalism and austerity “Macri Chau” (Goodbye Macri).

Dilma Rousseff, Brazil’s former president, reflected on the results of the primary in Argentina with the thought that this was a ‘light at the end of the tunnel for Argentina and for Latin America.”

History might move in zig-zags, but in temporal terms it is bewildering. Large numbers of significant events seem to strike us at faster and faster rates. It is hard to keep up with the news, let alone follow what is going on in each country. Tragedies appear suddenly and the names of communities that are little known fly off our lips: The Yazidis! The Rohingyas! In the next instance, they are forgotten, only to be replaced by the next calamity. Even as events rush by, history seems to be at a standstill. Nothing really changes. Lives remain precarious, days seem repetitive. The combination of what appears to be the speed of change with the experience of stasis is what is disorienting.

To provide a modest map to navigate some of these events, Tricontinental: Institute for Social Research will produce a regular “Red Alert,” a brief two-page assessment of key crises that can be easily printed out and distributed. The first – which is below – is on Kashmir. The PDF of this Red Alert #1: Kashmir can be downloaded here. 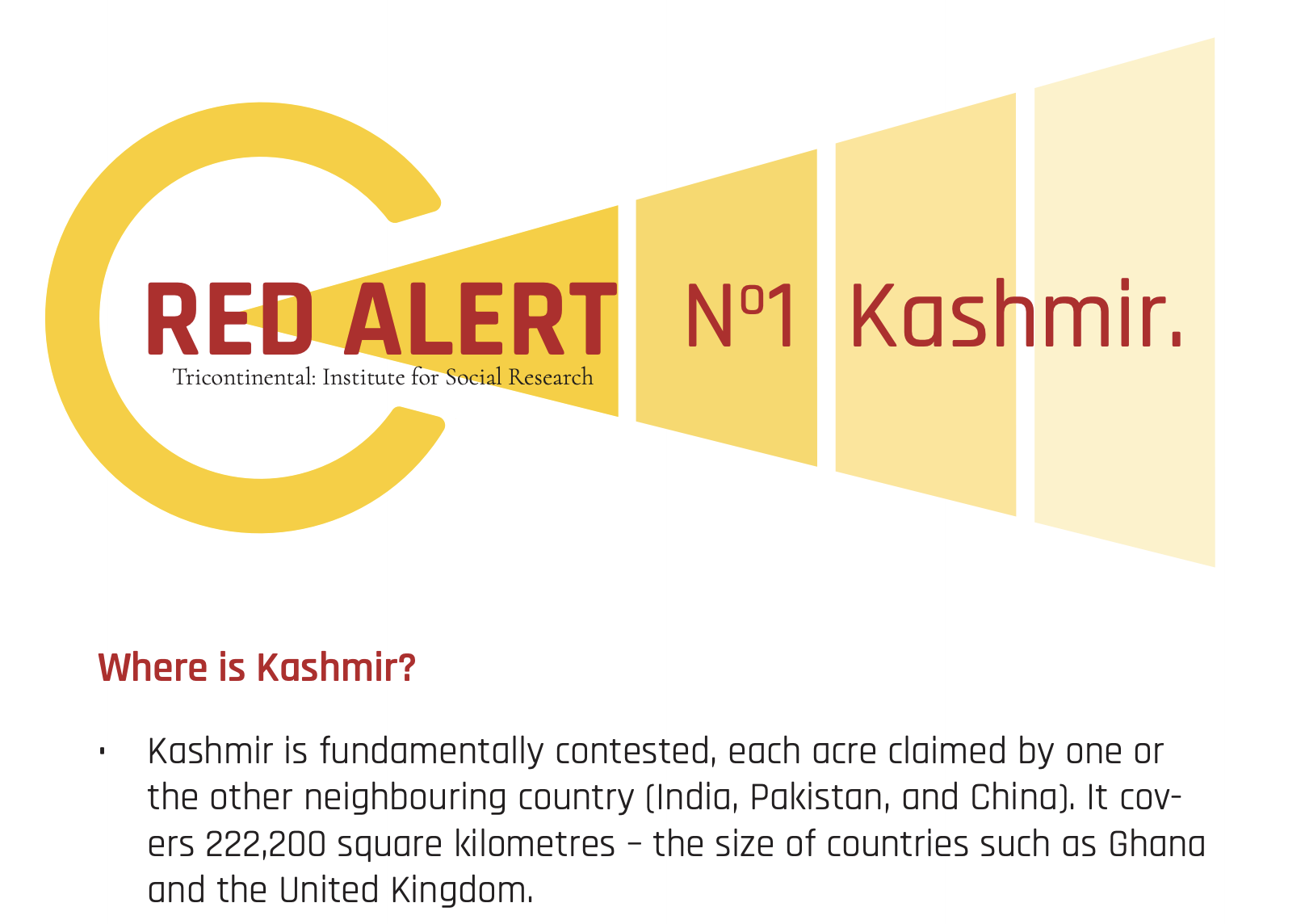 Kashmir is fundamentally contested, each acre claimed by one or the other neighboring country (India, Pakistan and China). It covers 222,200 square kilometers – the size of countries such as Ghana and the United Kingdom.

Approximately 17 million people live across this vast area, mostly in the regions controlled by India and Pakistan. The population of the Indian-held region alone is 12.5 million. Aksai Chin, controlled by China, is barren, significant mainly for a road that connects Tibet to Xinjiang.

What is the Permanent Problem of Kashmir?

The question of Kashmir is part of the unresolved business of the partition of South Asia in 1947. Until 1947, the region was under the control of a Hindu monarchy. The king was unwilling to accede to India. It was after armed raiders from Pakistan entered the Kashmir valley that he agreed to sign the Instrument of Accession. The most popular political movement in the region, the Jammu & Kashmir National Conference (under the leadership of Sheikh Abdullah), agreed to join the Indian Union as long as Kashmir’s autonomy was respected. The Indian Union has consistently whittled away at this autonomy.

On the day that the Indian army entered Kashmir (Oct. 27, 1947), India’s Prime Minister Jawaharlal Nehru sent a telegram to Pakistan’s Prime Minister Liaqat Ali Khan. In this telegram, Nehru wrote that Kashmir’s future “must be decided with the wishes of the people.” The standoff brought the dispute to the United Nations Security Council, which called for a plebiscite (resolutions 38 and 47).

Kashmir was divided by the war of 1947 between India and Pakistan. India and Pakistan have fought at least four major wars (1947, 1965, 1971, and 1999) as a result of this conflict, which has generated a permanent insurgency and a permanent militarization. There are estimated to be 600,000 Indian troops in Kashmir. Both countries have nuclear weapons.

Conditions in the Indian part of Kashmir have been atrocious for decades. Sober observers of the region have catalogued human rights abuses, including detentions, collective punishment, and torture of civilians. The UN High Commissioner of Human Rights’ reports from 2018 and 2019 show a shocking disregard for human rights by the Indian government in Kashmir. This violation of human rights and dignity is sought to be justified by the wild accusation that Kashmiris are terrorists.

What is the Current Crisis in Kashmir?

Two articles in the Constitution of India (1950) offered a fragile compromise towards the state’s autonomy. Article 370 conferred a special status on Jammu & Kashmir, allowing the state autonomy over certain key aspects of its governance. Article 35A prevented non-Kashmiri permanent residents from, among other matters, owning land in Kashmir

On Aug. 5, 2019, the right-wing Indian government of Narendra Modi and the Bharatiya Janata Party (BJP) invalidated articles 370 and 35A. This has been a demand of the Indian right-wing ever since 1948. On April 3, 2018, the Indian Supreme Court had said that Article 370 had acquired permanent status. Article 35A could not be removed because the Constituent Assembly had been dissolved in 1957. The legal basis to remove these two articles is not available. It will be challenged in the Indian courts.

Before the Modi government made this announcement in parliament, it sent 35,000 additional Indian troops into Kashmir. At the same time, it arrested all the major political leaders in Jammu & Kashmir. The legislative assembly had been dissolved in November 2018. The press was curtailed, and the Internet and phone services shut down.

The Indian government has unconstitutionally abolished the state of Jammu & Kashmir and divided it into two Union Territories, which will be governed from New Delhi rather than from Jammu & Kashmir’s capital Srinagar.

The Communist Party of India (Marxist) called the government’s actions the “murder of democracy and federalism.”

What is the Geopolitical Impact of the Kashmir Crisis?

The Indian government’s move on Jammu & Kashmir should not merely be seen as an internal matter. It is inextricably linked to the geopolitical atmosphere around the region.

The main conflict here – since the 1940s – has been between India and Pakistan. Disagreements are deeply rooted in the political culture of each country. The rise of the far right in India has only inflamed the conflict further.

China’s BRI has developed in Pakistan and Nepal. The $46 billion China Pakistan Economic Corridor (CPEC) runs through Pakistani-controlled Kashmir along the Karakoram Highway to the Gwadar Port in Baluchistan. In 2017, China and Nepal agreed to build the Himalayan Economic Corridor. India’s Border Roads Organisation has been busy building roads along its border with China, from Kashmir to Bhutan to Nagaland.

In 2017, tensions rose in the Doklam region near the border between Bhutan, China, and India. Bhutan openly says that it does not want to get drawn into a China-India conflict. It wants to settle its border with China but is prevented from doing so by India. 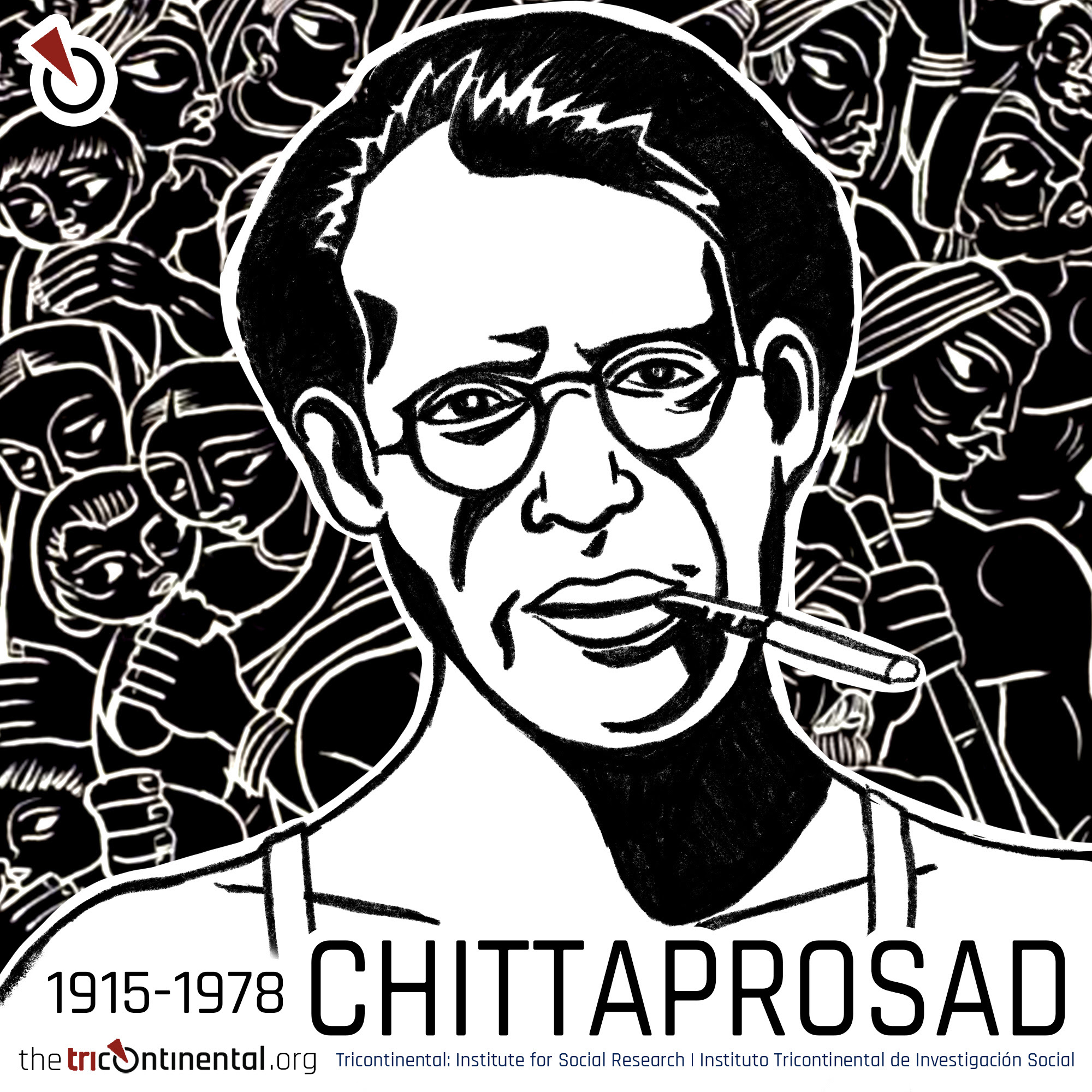 The drawing above is from Chittaprosad, one of the great Communist artists of his day. “In my artwork, I represent the tradition of moralists and political reformers,” Chittaprosad wrote. “To save people means to save art itself. The activity of an artist means the active denial of death.” No wonder he drew that powerful picture for Kashmir in 1946.

Our comrades Maimoona Mollah, Kavita Krishnan, Jean Drèze and Vimal Bhai went to Kashmir on a fact-finding mission from August 9 to 13. They returned with a harrowing tale, whose report must be widely shared. “The whole of Kashmir is, at the moment, a prison, under military control,” they write.

The hospitals in Jammu & Kashmir fill up with injured civilians. Journalist Mudasir Ahmad visited the Lal Ded maternity hospital in Srinagar. He met Bilal Mandoo and Raziya, who were sitting with their stillborn baby. Stuck in the curfew, complications at the birth led to the death of their child. They are trapped in the hospital. “I feel like I’m choking here,” says Raziya. She speaks for all Kashmiris.

← Blaming Each Other for Backing Terrorism
FULL VIDEO: CN LIVE!: Webb on Epstein and the Guardian, the NYT and WikiLeaks: Episode 6 →

11 comments for “History Runs in Zig-Zags: Crisis in Kashmir, Hope in Argentina”