WikiLeaks founder Julian Assange was indicted on Thursday under the Espionage Act, the first time a journalist has been charged under the Act for possessing and disseminating classified information.

A journalist was indicted under the Espionage Act for the first time in U.S. history on Thursday when the Department of Justice charged WikiLeaks founder Julian Assange with 17 counts of violating the Act in a move that opens the way for prosecution of anyone who publishes classified information.

The 37-page indictment charges Assange under four sections of the Act, including Section E for possessing and disseminating classified matter. It charged him with acts common to any investigative journalist:

Assange is serving a 50-week sentence in London’s Belmarsh prison for skipping bail and seeking asylum in Ecuador’s embassy in 2012 because he feared onward extradition from Sweden to the United States and prosecution under the Espionage Act. He was arrested on April 11 when Ecuador illegally lifted his asylum and let British police onto Ecuadorian territory to carry Assange from the embassy.

The U.S. had until June 12 to add additional charges in its extradition request to Britain. The decision on extradition rests with British Home Secretary Sajid Javid, who WikiLeaks said “is now under enormous pressure to protect the rights of the free press in the UK and elsewhere.”

John Demers, head of the DOJ’s National Security Division, in announcing the indictment told reporters: “Some say that Assange is a journalist and that he should be immune for prosecution for these actions.  The department takes seriously the role of journalists in our democracy and we thank you for it. It is not and has never been the department’s policy to target them for reporting.”

But Demers said Assange wasn’t a journalist. “No responsible actor, journalist or otherwise, would purposefully publish the names of individuals he or she knew to be confidential human sources in a war zone, exposing them to the gravest of dangers,” he said.

“Today the government charged Julian Assange under the Espionage Act for encouraging sources to provide him truthful information and for publishing that information. The fig leaf that this is merely about alleged computer hacking has been removed. These unprecedented charges demonstrate the gravity of the threat the criminal prosecution of Julian Assange poses to all journalists in their endeavor to inform the public about actions that have taken by the U.S. government.”

Assange would face a maximum of 175 years in jail if convicted on all charges. The Espionage Act carries a potential death penalty if the publication of classified information takes place during wartime. Some of WikiLeak‘s most prominent releases related to the U.S. wars in Iraq and Afghanistan, in which prima facie evidence of U.S. war crimes was revealed.

WikiLeaks criticized in a statement the global reach of U.S. law: “The Department of Justice wants to imprison Assange for crimes allegedly committed outside of the United States. This extraterritorial application of US law is explicit throughout the indictment… thereby classifying any territory in the world as subject to US law.” A 1961 amendment to the Espionage Act extended its jurisdiction from U.S. territory to the entire world.

A key part of the indictment alleges that Assange published in the Iraq, Afghanistan and State Dept. cables releases the unredacted names of informants and other persons, putting their lives at risk. The indictment does not name this as a violation of a specific statute, however, and appears to be  an attempt to win public sympathy for the new charges.

According to a WikiLeaks source, Assange was forced to reveal certain names in the Cable-gate releases in September 2011 to actually help individuals escape when two Guardian journalists in February of that year published a password to material containing their names that only intelligence agencies could access. Assange has repeatedly said that there is no known case of harm coming to anyone whose names were revealed and the indictment only says that informants were “vulnerable” to retribution.

The indictment accuses Assange of conspiring with former Army intelligence analyst Chelsea Manning to steal classified documents. But it clearly states that Manning already had legal “access to the computers in connection with her duties as an intelligence analyst” and that Assange’s efforts to help Manning with a password was intended to help hide her identity as the source. The indictment appears to be criminalizing what is a routine act of journalism.

“Had Manning retrieved the full password hash and had ASSANGE and Manning successfully cracked it, Manning may have been able to log onto computers under a user name that did not belong to her,” the indictment said. “Such a measure would have made it more difficult for investigators to identify Manning as the source of disclosures of classified information.”

Manning, who is portrayed throughout the indictment as WikiLeak‘s source only at Assange’s behest, (and who remains imprisoned for refusing to testify against Assange), issued this statement:

“I continue to accept full and sole responsibility for those disclosures in 2010. It’s telling that the government appears to have already obtained this indictment before my contempt hearing last week. This administration describes the press as the opposition party and an enemy of the people. Today, they use the law as a sword, and have shown their willingness to bring the full power of the state against the very institution intended to shield us from such excesses.”

The indictment under the Espionage Act demolishes a democratic pretense of freedom of the press in the U.S. and makes all news organizations —indeed any citizen — liable for prosecution for disseminating classified information.

“Notably, The New York Times, among many other news organizations, obtained precisely the same archives of documents from WikiLeaks, without authorization from the government — the act that most of the charges addressed,” the Times reported.

“Though he is not a conventional journalist, much of what Mr. Assange does at WikiLeaks is difficult to distinguish in a legally meaningful way from what traditional news organizations like The New York Times do: seek and publish information that officials want to be secret, including classified national security matters, and take steps to protect the confidentiality of sources,” the Times report on the indictment said.

This is madness. It is the end of national security journalism and the first amendment. https://t.co/wlhsmsenFw

“These charges are an extraordinary escalation of the Trump administration’s attacks on journalism, establishing a dangerous precedent that can be used to target all news organizations that hold the government accountable by publishing its secrets.

The charges against Assange are equally dangerous for US journalists who uncover the secrets of other nations. If the US can prosecute a foreign publisher for violating our secrecy laws, there’s nothing preventing China, or Russia, from doing the same.”

“This is the evil of lawlessness in its purest form. With the indictment, the ‘leader of the free world’ dismisses the First Amendment — hailed as a model of press freedom around the world — and launches a blatant extraterritorial assault outside its borders, attacking basic principles of democracy in Europe and the rest of the world.”

In a tweet, Hrafnsson added that he took “no satisfaction” in having correctly warned of the Espionage Act prosecution of Assange.

I find no satisfaction in saying ‘I told you so’ to those who for 9 years have scorned us for warning this moment would come. I care for journalism. If you share my feeling you take a stand NOW. Either you are a worthless coward or you defend Assange, WikiLeaks and Journalism. https://t.co/NkUfZWYan8

Former British ambassador Craig Murray tweeted that “the poison is out.”

The US espionage act charges against Julian Assange for publishing leaked classified information showing US war crimes is a massive attack on media freedoms and free speech.
The poison is out – we always knew this was what we were really fighting.

A guide to the new charges against Assange. 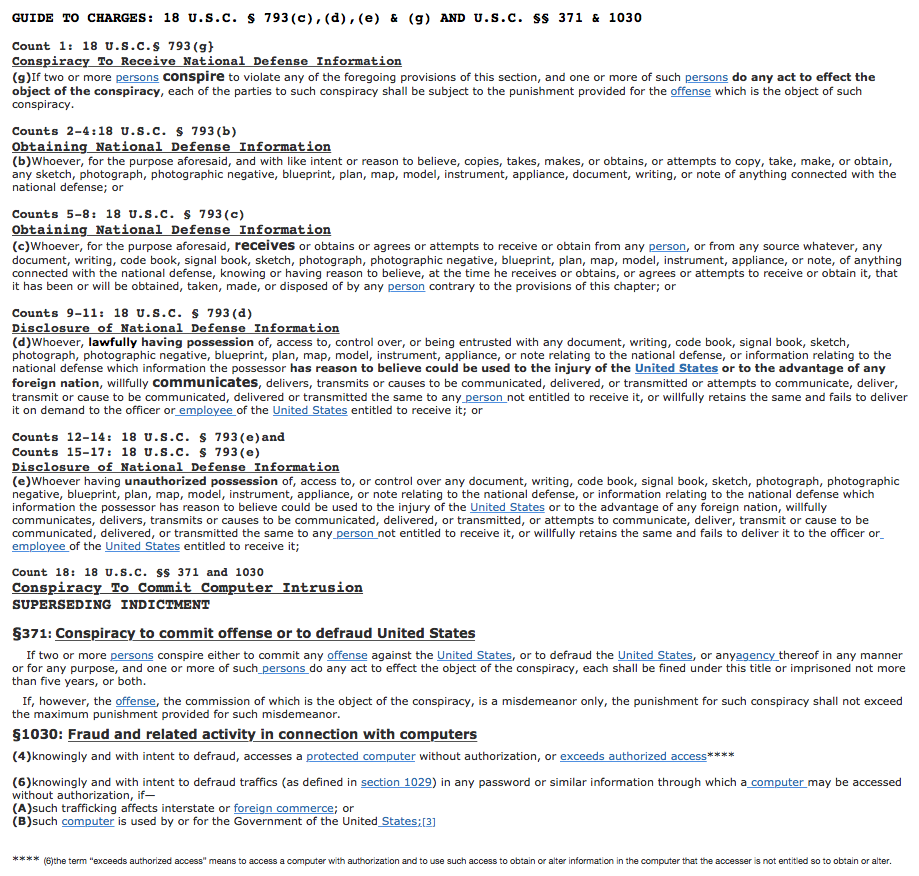 Elizabeth Vos and Catherine Vogan contributed to this article.