Kevin Zeese, co-founder of the Venezuelan Embassy Protection Collective, described the situation inside the embassy on Wednesday.

‘Focused on Sovereignty and Peace’

On May 1, I conducted this phone interview with Kevin Zeese, co-director of Popular Resistance, and co-founder of the Venezuelan Embassy Protection Collective, about the occupation of the embassy.

Dennis Bernstein: Where exactly are you now Kevin Zeese?

Kevin Zeese:  I’m talking to you from the Venezuelan embassy in Washington, D.C., as part of the Embassy Protection Collective, a group of organizations and individuals who are standing in solidarity with the Venezuelan people to protect their embassy from takeover by the Trump administration and the state government they have picked for Venezuela, which just had a failed coup yesterday.  I am co-director of Popular Resistance.org, which grew out of the Occupy movement and is a daily movement and organizing site which carries on the issues which were raised by the Occupy movement.  We are one of the initiators of this collective at the embassy, along with Code Pink, the Answer Coalition, Black Alliance for Peace, and other organizations.

Dennis Bernstein: Tell us exactly what you are doing there in the embassy and what people in Washington, D.C., are trying to do in the context of what appears to be a U.S.-supported coup and advanced destabilization. 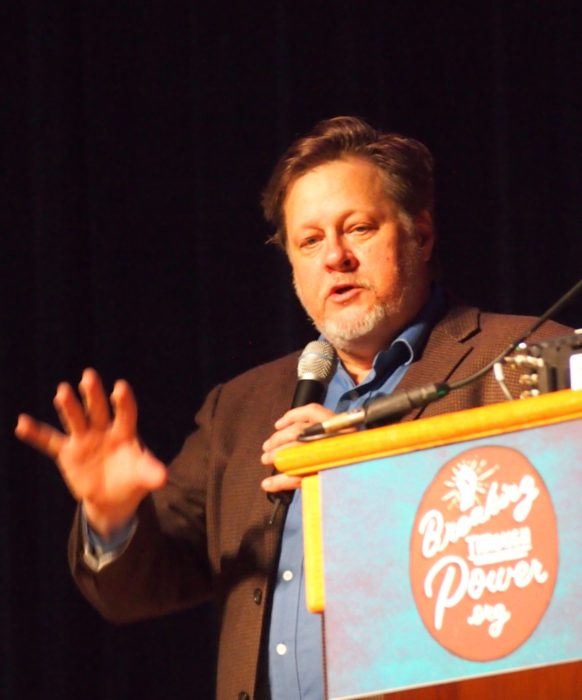 Kevin Zeese:  We have upwards of 50 people living here every night.  We began on April 10 and it is ongoing.  We work here, we sleep here, we cook here. This has become our home and we see ourselves as tenants of the Venezuelan government.  We live here with the permission of the elected Venezuelan government.  There was no unlawful entry, there is no trespass.  We see ourselves as interim protectors because the U.S. embassy in Caracas is vacant and the U.S. wants to have Switzerland serve as a protectorate for that embassy.  Venezuela is negotiating with other countries to be a protectorate for this embassy. We are hoping that the two countries will mutually agree to having protectorates and that way both embassies will remain sovereign.  Once that is negotiated, we hope that will begin an ongoing dialogue that can resolve a lot of the disputes between the U.S. and Venezuela.

I know that Venezuela wants to have a good relationship with the United States and does not see the United States as an enemy.  They want peace, but they will protect their sovereignty and independence and they are prepared to do so with their military as well as their civilian militia.  We hope to avoid such a conflict and use this embassy dispute as a way to open up diplomatic relations and end the economic attack as well as the threats of military force.

Dennis Bernstein: What confirms this to be a coup, an overthrow of the government there?

Kevin Zeese:  There is no question that this is a coup.  This was discussed by the OAS [Organization of American States] in January and February by the U.S. and its allies.  They picked [National Assembly President Juan] Guaidó to be their puppet president, someone who had never run for presidency and had come from the second smallest state with 24 percent of the vote, which was enough to get into the national legislature.  By appointing himself interim president he violated the Venezuelan constitution in a multitude of ways.

The coup tried yesterday to conduct a takeover of the country and failed miserably. Guaidó — along with the leader of the opposition, Leopoldo Lopez, who has been convicted of inciting violence that killed more than 140 people — fled and are hiding in the Spanish embassy.  So our understanding of the reality of the coup is not just that it was discussed at the OAS but also that the night before the coup [Vice President] Michael Pence called Guaidó and said that he has the full support of the U.S. government.  As soon as he was self-appointed, Trump called him and recognized him and got the right-wing Lima Group countries to go along with that as well as many Western European countries.  One hundred and fifty nations have not recognized Guaidó, neither has the United Nations.  The OAS, which has always been under the thumb of the United States, had to change its rules because they could not get the two-thirds vote required to recognize Guaidó, and then they barely got the majority. That has resulted in the OAS ambassadors from Venezuela leaving.  The Caracas embassy has been used as a place for organizing opposition for many years. They worked very hard to undermine the 2018 reelection of President [Nicolás] Maduro.  There were more than 150 election observers from around the world and they unanimously found that the election met international standards and was free of fraud. 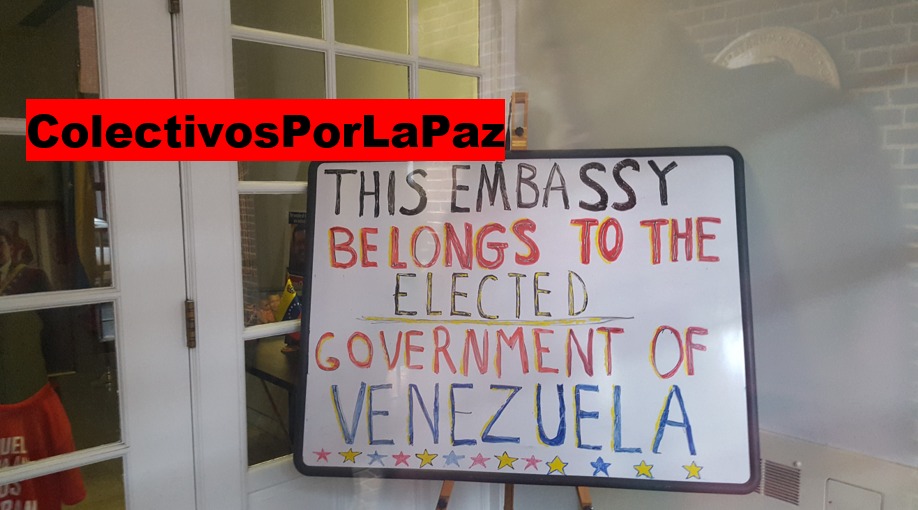 Dennis Bernstein: Meanwhile we have the Trump administration trying to install part of the coup leadership that apparently failed in a coup attempt yesterday.  It was an amazing day for U.S. intelligence when they were talking about this plane, all the leaders agreed to go and something had to be done.  It was right out of the textbook of CIA destabilization and overthrow.  It is a throwback but is extremely disturbing.  What are those who support the government saying to you inside the embassy?  Are they willing to fight all the way?

Kevin Zeese: If you go to our website, you can read the declaration of our collective, which lays out how Maduro was reelected legitimately, how the Vienna Convention requires the U.S. government to protect the embassy and not turn it over to a fake government, and how Guide’s election violated the Venezuelan constitution.

Of course, there are many people from Venezuela here who take a very different position.  Maduro’s supporters are for the most part in Venezuela, which is why they keep winning elections and defeating these coups.  The people who fled Venezuela, the business people and government people from the pre-Chavez era, are forming a violent mob outside the embassy.  Yesterday they were abusing us with sound cannons and racist slurs.  Today an opposition person snuck into the basement, got to the third floor and locked himself in a room and we had to negotiate with the secret service to remove him.  Unfortunately, the secret service removed the police barriers and told us we were on our own.  So, we now feel that we are under siege.  But people are confident.  We know we are acting lawfully, that we are on the right side of history.  We are standing against a U.S. coup, a U.S. military threat, and with the Venezuelan people.

Dennis Bernstein: [President Donald] Trump, [National Security Advisor John] Bolton and others at the top are calling for a coup.  They said they were ready to fly to Havana but, according to Bolton, that plan broke down at the last minute, they chickened out.

Kevin Zeese: John Bolton is a known liar.  He was convicted of lying to Congress.  He is a known war criminal who has been involved in genocide in Central America during the Iran/Contra era.  He was pardoned by [President] George H. W. Bush.  Everything he is saying about Venezuela is a lie.  I am sure that Maduro never planned to leave the country. Bolton made another false statement about us at the Atlantic Council when he said that we were here in violation of the law.  He said that we have been asked to leave, which is not true.  I have absolutely no doubt that there was never any plan by the Venezuelan government to leave the country.  I was in Venezuela a few weeks ago and we actually ended up meeting with President Maduro after American Airlines cancelled all flights out of the country on the false claim that there was widespread civil unrest, when there was none at all.  We went out and filmed the streets to show that there was no unrest.  But that day President Maduro asked to meet with us. We were there for 90 minutes and he talked about how he was willing to put his life on the line to protect Venezuela’s independence.

Dennis Bernstein: Would you say a little bit more about the Embassy Protection Collective?

Kevin Zeese: We are a collection of organizations and individuals.  Our declaration has been signed by about 1,500 people and organizations. You can support us through Popular Resistance or through Code Pink or the Black Alliance for Peace.

Dennis Bernstein: So just to be clear, you are saying that you and the folks in this collective feel under siege now.  The police have told you they would not protect you until after you are hurt or wounded.  There are a series of anti-government protests supported by the U.S. government outside the embassy.

Kevin Zeese: We have agreed to withdraw inside the embassy while these rallies go on.

Dennis Bernstein: By the way, what did you talk about all night?  I’m sure you didn’t sleep all that well.

Kevin Zeese: We discussed the day’s events and how we responded.  It was a very tense situation.  We reviewed what we had done and what we could do better.  We discussed what was expected the coming day. And we were able to get online through social media so that more people can get involved and support our actions.

Dennis J. Bernstein is a host of “Flashpoints” on the Pacifica radio network and the author of “Special Ed: Voices from a Hidden Classroom.”  You can access the audio archives at www.flashpoints.net. You can get in touch with him at dbernstein@igc.org.

← The Tragedy of Venezuela is the Tragedy of the US
Assange to Extradition Court: ‘I Won’t Surrender to the US for Doing Journalism’ →