The Swedish and U.S. claims are vastly different, writes Jonathan Cook. But the public conversation in the U.K. is simply about which has first dibs on Assange.

In a previous blog post, I warned that the media and political class would continue with their long-running deceptions about Julian Assange now that he has been dragged from the Ecuadorian embassy. They have wasted no time in proving me right.

The first thrust in their campaign of deceit was set out on The Guardian’s front page on Friday, April 12, the day after Assange was imprisoned.

There should have been wall-to-wall outrage from public figures in the U.K. at the United States creating a new crime of “doing journalism” and a new means of arrest for those committing this “crime” overseas, what I have termed “media rendition.”

Remember that all of the information contained in the U.S. charge sheet against Assange – the supposed grounds for his extradition – were known to the previous Obama administration as far back as 2010. But President Barack Obama never dared approve the current charges against Assange because legally there was no way to stop them being turned against “respectable” journalists, like those at The New York Times, The Washington Post and The Guardian.

This was the same Obama administration that had the worst record on prosecuting whistleblowers. Obama was no friend to investigative journalism but he understood that it would be unwise to so overtly subvert the notion of a free western press.

That the Trump administration has cast all this aside to get Assange behind bars should have every journalist in the world quaking in their boots, and loudly decrying what the U.S. is seeking to do. 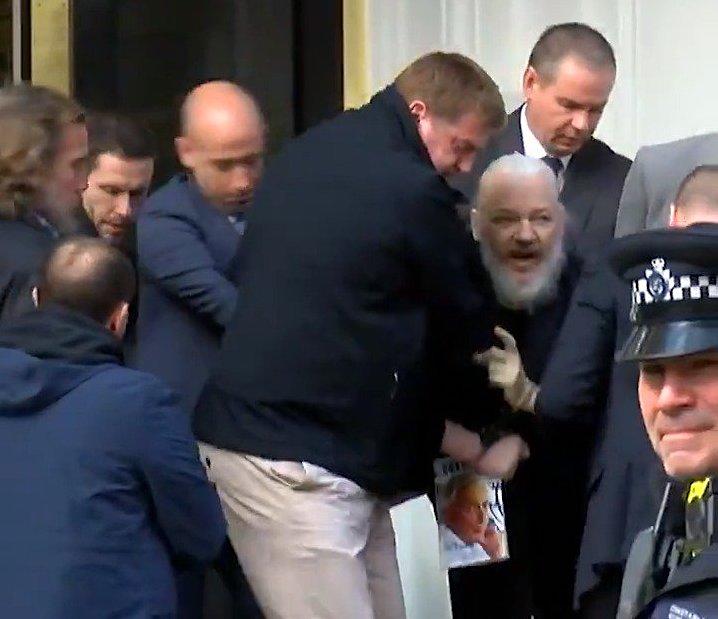 Assange getting dragged out of embassy, April 11, 2019. (Ruptly/YouTube)

And yet the reaction has been either quiet acceptance of the U.S. extradition request as a simple law enforcement measure or gentle mockery of Assange – that the scruffy outlaw dragged from the embassy was looking even scruffier after seven years of extreme house arrest and “arbitrary detention.” What a laugh!

Now we can see how the media is going to collude in a narrative crafted by the political class to legitimize what the Trump administration is doing.

Rather than focus on the gross violation of Assange’s fundamental human rights, the wider assault on press freedoms and the attack on Americans’ First Amendment Rights, U.K. politicians are “debating” whether the U.S. extradition claim on Assange should take priority over earlier Swedish extradition proceedings for a sexual-assault investigation that was publicly dropped back in 2017.

In other words, the public conversation in the U.K., sympathetically reported by The Guardian, supposedly Britain’s only major liberal news outlet, is going to be about who has first dibs on Assange.

Here’s the first paragraph of The Guardian’s front-page article:

“Political pressure is mounting on [Home Secretary] Sajid Javid to prioritise action that would allow Julian Assange to be extradited to Sweden, amid concerns that US charges relating to Wikileaks’ activities risked overshadowing longstanding allegations of rape.”

So, the concern is not that Assange is facing rendition to the U.S. It is that the U.S. claim might “overshadow” an outstanding legal case in Sweden.

The 70 MPs who signed the letter to Javid hope to kill two birds with one stone.

First, they are legitimizing the discourse of the Trump administration. This is no longer about an illegitimate U.S. extradition request on Assange we should all be loudly protesting. It is a competition between two legal claims, and a debate about which one should find legal remedy first.

It weighs a woman’s sexual assault allegation against Assange and WikiLeaks’ exposure of war crimes committed by the U.S. military in Iraq and Afghanistan. It suggests that both are in the same category, that they are similar potential crimes.

But there should only be one response to the U.S. extradition claim on Assange: It is entirely illegitimate. No debate. Anything less, any equivocation is to collude in the Trump administration’s narrative.

The Swedish claim, if it is revived, is an entirely separate matter.

That The Guardian and the MPs are connecting the two should come as no surprise.

In another article on Assange last Friday, the The Guardian– echoing a common media refrain – reported as fact a demonstrably false claim: “Assange initially took refuge in the Ecuadorian embassy to avoid extradition to Sweden.”

Assange and WikiLeaks always said that he entered the embassy to claim political asylum so as to avoid extradition to the U.S.

There could be no possible reason for its reporters to make this elementary mistake other than that The Guardian is still waging its long-running campaign against Assange, the information revolution he represents and the challenge he poses to the corporate media of which The Guardian is a key part.

For seven years the political and media establishments have been deriding the suggestion that Assange faced any threat from the U.S., despite the mounting private and public evidence that he did. Assange again has been proved conclusively right by current events, and they decisively wrong.

The Guardian knows that Assange did not need political asylum to avoid a sex case. So reporting this not as a claim by his detractors but as an indisputable fact is simple, Trump-supporting propaganda meant to discredit Assange — propaganda that happily treats any damage to the cause of journalism as collateral damage.

Second, the only major politicians prepared to highlight the threats to Assange’s personal rights and wider press freedoms posed by the U.S. extradition request are opposition Labour leader Jeremy Corbyn and his ally, Diane Abbott, the Labour shadow home secretary. They have rightly noted that the U.S. is using the extradition demand to silence Assange and intimidate any other journalists who might think about digging up evidence of the crimes committed by the U.S. national security state.

Abbott commented last Friday that Assange’s current arrest was not about “the rape charges, serious as they are, it is about WikiLeaks and all of that embarrassing information about the activities of the American military and security services that was made public.”

Abbott has faced a storm of criticism for her statement, accused of not giving enough weight to the Swedish case. In fact, her only mistake was to give it more weight than it currently deserves. She spoke of “rape charges,” but there are in fact no such charges. (Additionally, although the case is classed broadly as a rape allegation in Sweden, in the U.K. it would be classed at most as sexual assault. Forgotten too is that the evidence was considered too weak by the original prosecutor to bring any charges, Assange was allowed to leave Sweden and the investigation was dropped.)

Assange Did Not Flee Questioning

Rather, Assange was previously wanted for questioning, and has never been charged with anything. If the Swedish extradition request is revived, it will be so that he can be questioned about those allegations. I should also point out, as almost no one else is, that Assange did not “flee” questioning. He offered Swedish prosecutors to question him at the embassy.

Even though questioning overseas in extradition cases is common – Sweden has done it dozens of times – Sweden repeatedly refused in Assange’s case, leading the Swedish appeal court to criticize the prosecutors. When he was finally questioned after four years of delays, Swedish prosecutors violated his rights by refusing access to his Swedish lawyer.

Further, the MPs and media getting exercised that Assange “took refuge in the Ecuadorian embassy to avoid extradition to Sweden” are forgetting that he did not object to extradition as long as he received a promise that he would not then be extradited on to the U.S.  Sweden refused to offer such assurances. We can now see only too clearly that Assange had every reason to insist on such assurances. 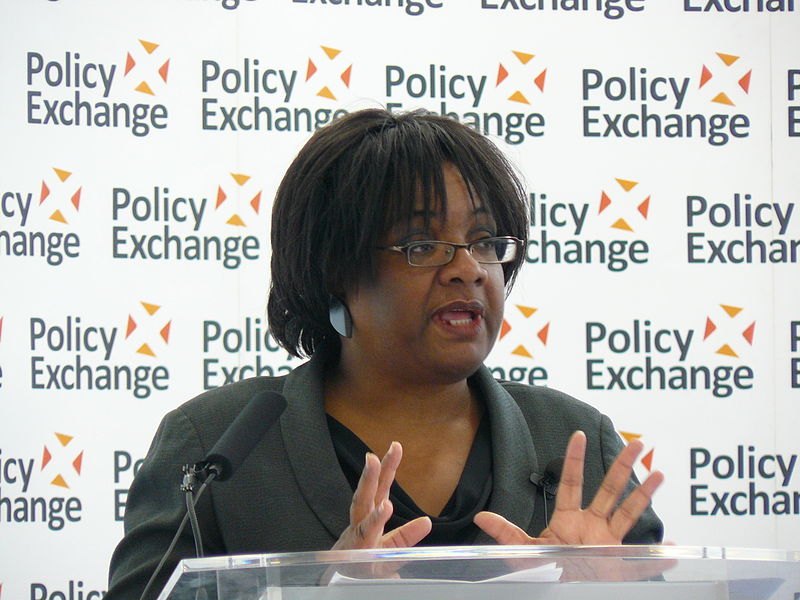 I don’t have space here to analyze the Swedish case on this occasion (that’s maybe for another time), though it is worth briefly noting that most of the problematic details of the case have been disappeared down the memory hole.

Given that the political and media class are still speaking in terms of “charges,” rather than questions about allegations, we should recall that there were glaring problems with the evidence in the Swedish case. Not least, the key piece of evidence against Assange – a torn condom produced by the woman – was found to contain not a trace of DNA from either Assange or from her.

Those at the forefront of the attacks on Abbott and Corbyn, echoed by The Guardian, are the same Blairite Labour MPs who have been trying to oust Corbyn as Labour party leader, despite his twice being elected overwhelmingly by the membership.

These MPs, who dominate the Labour parliamentary party, have spent the past four years focusing on smears that Labour is “institutionally anti-Semitic” in an obvious effort to terminally wound Corbyn. Now they have found another possible route to achieve the same end.

They are suggesting that Corbyn and Abbott are disregarding the Swedish woman’s right to justice. The clear subtext of their arguments is that the pair are rape apologists.

As I have pointed out, Abbott has actually overstated the current status of the Swedish case, not sidelined it at all.

But what Corbyn and Abbott have done is to make a clear political, legal and moral demarcation between the Swedish case, which must be resolved according to accepted legal principles, and the U.S. extradition, which has no legal or moral merit whatsoever.

What these U.K. MPs and The Guardian have done in this front-page story is muddy the waters yet further, with enthusiastic disregard for the damage it might do to Assange’s rights, to Corbyn’s leadership and to the future of truth-telling journalism.