UPDATED: Suspects are being investigated in Spain for having tried to extort €3 million from WikiLeaks in exchange for a huge cache of documents and surveillance videos of Assange inside Ecuador’s London embassy, including with his doctors and lawyers.

A Spanish judge is investigating an alleged extortion scheme in which suspects in Madrid offered video and audio surveillance to the editor of WikiLeaks in exchange for €3 million, WikiLeaks said on Wednesday.

The surveillance was taken over the past year inside the Ecuador embassy in London where WikiLeaks founder Julian Assange has legally been granted political asylum since 2012, said Kristinn Hrafnsson, the WikiLeaks editor, at a press conference in the British capital.  Included in the “trove” of material was a copy of a legal document regarding Assange’s defense strategy that was briefly left behind in a conference room in the embassy, Hrafnsson said.

“It is a grave and serious concern when legal meetings are being spied upon and legal documents are stolen,” he said. “That is something that not even prisoners have to endure.”

Assange was also filmed being examined by his doctor in the embassy, Hrafnsson said. “Nobody expected that this was recorded and stored and found its way to some dubious individuals in Spain,” he said. 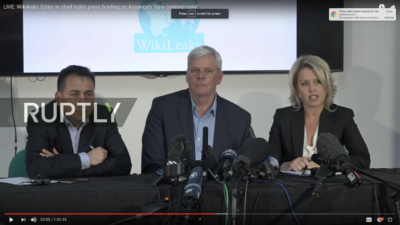 Jennifer Robinson, Assange’s lawyer, called it a breach of attorney-client privilege. “The documents you have seen [presented at the press conference] demonstrates just how much surveillance he has been under and it is a breach of confidence for us, his lawyers, and his doctors to provide medical care in the embassy,” Robinson said. “This is a severe breach of attorney-client privilege and fundamentally undermines our ability to defend and provide defense to Julian Assange.”

Hrafnsson communicated with the alleged extortioners and was given samples of what they possessed, the WikiLeaks editor said. He then traveled to Spain and secretly videotaped a meeting with “four individuals” in which Hrafnsson learned the extent of the material that they possessed. They told him that €3 million was “a good deal” as they had had offers of €9 million for the material. Hrafnsson then went to the Spanish police who opened an investigation. He said he knew the identity of one of the four who had a prior conviction on similar charges and was seen as the “ringleader.”

Aitor Martinez, the Assange lawyer who said he’d briefly left the legal document in the embassy conference room that was copied, then took part in a sting operation with the police. He wore a wire as he met with the alleged extortioners in Madrid, Hrafnsson said.  A full investigation by a special extortion team was then opened and the case is now in the hands of an investigative judge, he said.

“Extortion is a serious matter,” Hrafnsson said, “but of greater concern to me is that this is material gathered by spying by the government of Lenin Moreno and officials who work on his behalf against an individual who was granted diplomatic protection by the Ecuadorian government.”

In an apparent reference to Moreno, Hrafnsson said: “We know from reports that this is the work of one person to service the interests of the United States government who want to indict and imprison a publisher for the crime of publishing truthful material.”

Robinson said WikiLeaks would file a “fresh complaint” to the UN special rapporteur on privacy rights, who has said he will visit Assange on April 25.  The UN Special Rapporteur on Torture Nils Melzer will also visit Assange that day, WikiLeaks said.

Robinson criticized the British government for being poised to arrest and extradite Assange to the United States. “That a government would cooperate with another state to extradite a publisher for publishing truthful information outside its territory sets a dangerous precedent here in the UK and elsewhere,” she said. “No one can deny that risk. That is why he sought asylum in the Ecuadorian embassy.”

Fidel Narváez, the former Ecuadorian consul at the embassy who said he saw Assange everyday for six years, told the press conference: “I very much hope that what we presented today will break the shield that currently the Ecuadorian government has built in my country…aided by the Ecuadorian press that is not doing what it should do to challenge and question the government.” He added: “There is lots of misinformation about Julian’s asylum but one thing is clear: the new government of Ecuador is not protecting Julian Assange anymore as it should.”

On Friday WikiLeaks tweeted that a “high-level” source in the Ecuador government told WikiLeaks that Assange’s expulsion and arrest would come in “hours to days.” That set off a worldwide reaction of Assange supporters as well as by UN special rapporteurs. Heavily armed police have roamed the environs of the embassy, and people in unmarked cars have been parked outside, either as a form of intimidation or on standby waiting for orders to move in.

“The only reason it hasn’t happened yet is because of the international shame that will be attached to Ecuador if it does so,” Narváez said.  “The government is clearly building a case to end the asylum and what we’ve seen here is the basis for that.”

Walk up to one of the "undercover" cars staking out the Ecuadorian embassy in London. This particular car has seen three shifts of different pairs of people over the last twenty hours. Engines running, lights on. Watcher makes call under head cover. pic.twitter.com/e778EN0nU6 https://t.co/cPfdib4kat

WikiLeaks on Tuesday said that Ecuador had fired a diplomat from the embassy, accusing him of being “close” to Assange. The tweet implied that the diplomat may have been WikiLeak’s source about Assange’s imminent expulsion and arrest.

Ecuador: we just fired an official "close to Assange" for not being loyal

Ecuadorian statement comes after a leak that it was planning to hand Assange over to be arrested, violating his asylum, after US pressure and inducements, within "hours to days".https://t.co/TH1qTFxVbm

The central question that remains is who had access to the surveillance material and then transferred it to the alleged extortioners. “I don’t know very much about that,” Hrafnsson said. “I assume that will be part of the investigation by the Spanish police authorities and by the Spanish lawyers. However we do have more material that I recorded in Spain and it will possibly cast more light on that chain—how it ended up in Spain. We will make it available online shortly. [But] I don’t want to speculate how that came about.”

The Ecuadorian government had prime possession of surveillance and the British and U.S. governments could have also obtained it, given their close contacts with Ecuador on Assange.   However there would be little apparent motive for these governments to have made the surveillance known.

“Let’s remember that Julian Assange is not serving a sentence, he doesn’t have charges,” Narváez said. “He is a political refugee. Political refugees do not lose rights. On the contrary, they should have their rights protected.”

The following is the full video of the one-hour press conference held in London on Wednesday:

← RAY McGOVERN: Unaccountable Media Faced with Dilemma in Next Phase of Deep State-gate
Moreno Withdraws Asylum as Assange is Arrested →