Sanders is in step with most Americans, says Norman Solomon, and that bothers the defenders of oligarchy.

With a launch of the Bernie Sanders 2020 campaign on the near horizon, efforts to block his trajectory to the Democratic presidential nomination are intensifying. The lines of attack are already aggressive — and often contradictory.

One media meme says that the senator from Vermont made so much headway in moving the Democratic Party leftward with his 2016 presidential bid that he’s no longer anything special. We’re supposed to believe that candidates who’ve adjusted their sails to the latest political wind are just as good as the candidate who generated the wind in the first place.

Bloomberg News supplied the typical spin in a Feb. 8 article headlined “Sanders Risks Getting Crowded Out in 2020 Field of Progressives.” The piece laid out the narrative: “Sanders may find himself a victim of his own success in driving the party to the left with his 2016 run. The field of Democratic presidential hopefuls includes at least a half-dozen candidates who’ve adopted in whole or in part the platform that helped Sanders build a loyal following . . .” 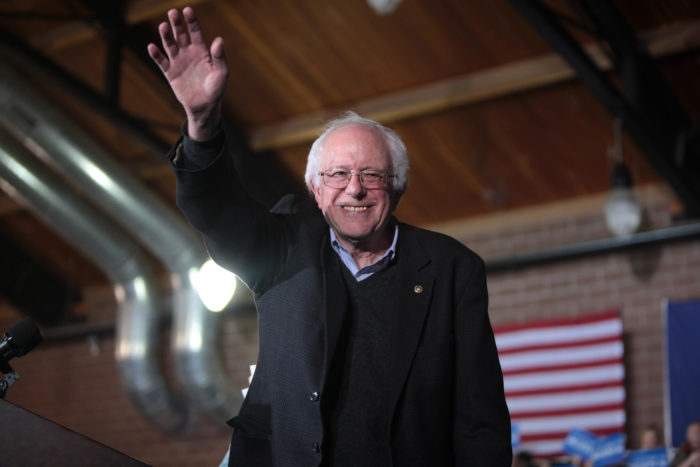 Yet Bernie is also being targeted as too marginal. The same Bloomberg article quoted Howard Dean, a long-ago liberal favorite who has become a hawkish lobbyist and corporate mouthpiece: “There will be hardcore, hard left progressives who will have nobody but Bernie, but there won’t be many.”

So, is Bernie now too much like other Democratic presidential candidates, or is he too much of an outlier? In the mass media, both seem to be true. In the real world, neither are true.

Last week, Business Insider reported on new polling about Sanders’ proposal “to increase the estate tax, the tax paid by heirs on assets passed down by the deceased. Sanders’ idea would lower the threshold to qualify for the tax to $3.5 million in assets, down from the current $11 million. The plan would also introduce a graduating scale of tax rates for the estates of wealthier Americans, eventually reaching a 77 percent marginal rate for assets over $1 billion.”

Here are the poll results: “When presented with the details of the proposal, 37 percent of respondents supported Sanders’ policy while 26 percent opposed, according to Insider’s survey.” (The rest had no opinion.)

That kind of response from the public is a far cry from claims that Sanders is somehow fringe. In fact, the ferocity of media attacks on him often indicates that corporate power brokers are afraid his strong progressive populism is giving effective voice to majority views of the public.

A vast range of grassroots organizing — outside and inside of electoral arenas — has created the current leftward momentum. “As a progressive, it is heartening to see so many other candidates voice support for Senator Sanders’ policies,” said Alan Minsky, executive director at Progressive Democrats of America. “However, I’ve been around the block enough times to know that politicians who adopt positions in tune with the fashion of the moment are not as trustworthy as those rare few, like Bernie Sanders, who have held firm to a powerful social justice vision through his entire long career.” 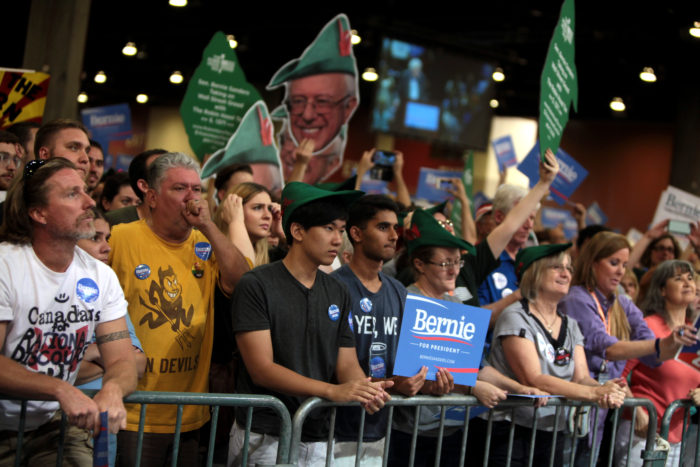 I also asked for a comment from Pia Gallegos, former chair of the Adeline Progressive Caucus of the New Mexico Democratic Party. “Bernie’s competitors lack his track record on economic security for all American workers, Medicare for All, free public college education, taxing the rich and opposing bloated military budgets,” she said. “Those are long-standing positions that — more than ever — resonate with grassroots activists and voters. Other Democratic presidential candidates will try to imitate this populist agenda, but only Bernie can speak with the vision, clarity and moral authority that the Democratic Party’s presidential candidate needs to defeat the incumbent.”

The overarching fear that defenders of oligarchy have about Bernie Sanders is not that he’s out of step with most Americans — it’s that he’s in step with them. For corporate elites determined to retain undemocratic power, a successful Bernie 2020 campaign would be the worst possible outcome of the election.

← López Obrador Vows ‘Poverty’ for Mexican Government
From Sydney: Whistle-Blowing, WikiLeaks and the Future of Democracy →

72 comments for “Why a Bernie 2020 Campaign is Drawing Fire”