The U.S. secretary of state is a Christian zealot who sees the U.S. as incapable of doing ill, writes Lawrence Davidson.

U.S. Secretary of State Mike Pompeo started out the new year—the date was Jan. 10—preaching “the truth” about U.S. foreign policy in the Middle East, and for reasons we will get to below, he chose to do so at the American University in Cairo. He implied that he was particularly capable of discerning the truth because he is “an evangelical Christian” who keeps a “Bible open on my desk to remind me of God and His Word, and The Truth.” This confession indicates that Pompeo is wearing ideological glasses through which he cannot possibly see the world, much less the Middle East, in an objective fashion. We can assume that the decidedly unthinking and amoral president he serves has no problem with this prophet in the State Department because Pompeo is one of the few cabinet ministers whom President Donald Trump has not fired.

So what are Pompeo’s versions of foreign policy truth? In terms of his Cairo pronouncements, they are twofold. First, as is to be expected of a man of his temperament (he declared: “I am a military man” who learned his “basic code of integrity” at West Point), he has identified the true enemy of the civilized world. And, again not unexpectedly given his Christian zealotry, the enemy is of Muslim origin. It is the “tenacious and vicious” cabal of “radical Islamism, a debauched strain of the faith that seeks to upend every other form of worship or governance.” 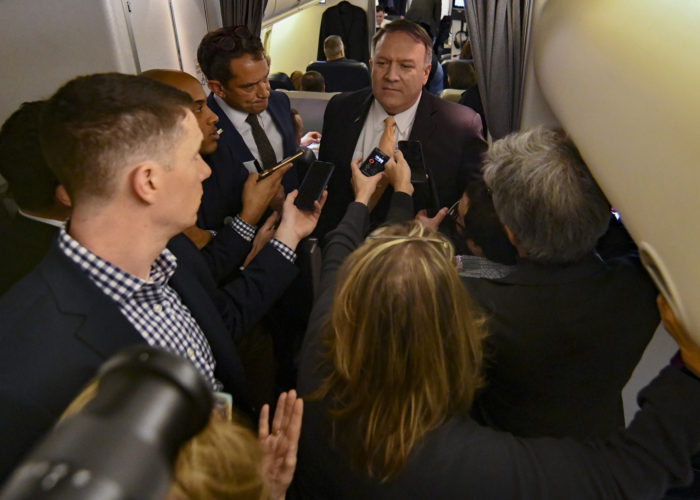 This initial “truth” is noteworthy for what it does not take into consideration, such as traditional U.S. alliances with brutal and corrupt military or monarchical dictatorships. Any move to reduce support for such regimes in the Middle East is, in Pompeo’s view, a “misjudgment” that must have “dire results.” As long as these dictatorships oppose what Pompeo opposes, their brutality and corrupt nature can be judged acceptable. For example, Pompeo praised his host, the military dictator of Egypt, Abdel Fattah Saeed Hussein Khalil El-Sisi, who is an archetypical example of this murderous breed of ruler. He praised El-Sisi exactly because he has joined the U.S. in the suppression of “Islamists.” The Egyptian dictator, in Pompeo’s words, is “a man of courage.”

Pompeo’s second “truth” is the self-evident fact of American exceptionalism. He told his listeners that “America is a force for good in the Middle East.” Pompeo does not articulate the reference, but his claim taps into the Christian image of the U.S. as “a shining city on the hill”—a God-blessed light unto the nations. This was one of Ronald Reagan’s favorite themes.

As proof of American’s alleged beneficence, Pompeo makes a series of dubious claims about the behavior of the United States government. Here are a few. Comments within brackets are those of this author:

“For those who fret about the use of American power, remember this: (No.1) America has always been, and always will be, a liberating force.” [Since World War II we have been liberating dictators from their own rebelling people.] (No.2) “We assembled a coalition to liberate Kuwait from Saddam Hussein.” [The subsequent two Gulf Wars plus the U.S. imposed sanctions regime killed at least half-a-million Iraqis.] (No.3) “And when the mission is over, when the job is complete, America leaves.” [Unless the “liberated” countries’ government wants Washington to establish bases which, it seems, they almost always do. The U.S. now has some 800 military bases in 70 countries around the world.] (No. 4) The U.S. and its allies helped destroy most of ISIS, and in the process “saved thousands of lives.”[There is no official number for the civilians killed in the so-called war on terror, of which the campaign against ISIS is but a part. However, there is no doubt that, to date, it is at least in the high hundreds of thousands. ] (No.5) “Life is returning to normal for millions of Iraqis and Syrians.” [Unless you have a really perverse definition of “normal,” this is a total fantasy.]

According to Pompeo, achievements No. 4 and No. 5 are due to the “fact” that President Donald Trump rescued U.S. foreign policy in the Middle East. Rescued? Rescued from what? From the foreign policy of Barack Obama, of course. 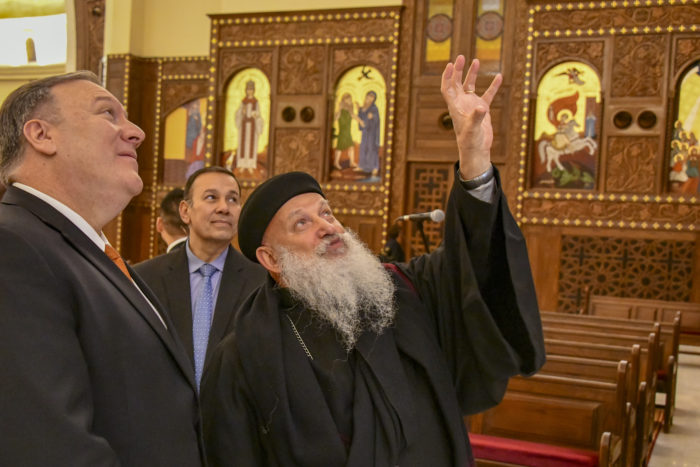 “America, your long-time friend, was absent too much. Why? Because our leaders gravely misread our history, and your historical moment. These fundamental misunderstandings, were set forth in this city in 2009.”

That claim was a direct reference to former President Obama’s speech calling for a “new relationship with the Muslim world” delivered on June 4, 2009, at nearby Cairo University. That is why Pompeo came to Egypt to make his speech, which is in essence, an indictment of Obama’s foreign policy.

In brief, in 2009 Obama, who also claimed in his Cairo talk to be speaking the truth, had referenced the negative impact of Western imperial and colonial history toward the Middle East, and then took a pro-democracy stance that, if carried into policy, would have weakened support for traditional dictatorships in places like Egypt. Obama saw a connection between the brutality of such dictatorships and the spread of religious fanaticism—a connection that was stronger than “radical Islamist” ideology alone. Obama also implied that President George W. Bush’s post 9/11 policy, which led not only to the unnecessary invasion of Iraq, but also to a policy of official torture, resulted in the United States “acting contrary to our ideals.” In addition, Obama was ready to negotiate with those seen as enemies by Pompeo, as symbolized by his willingness to make a deal with Iran. 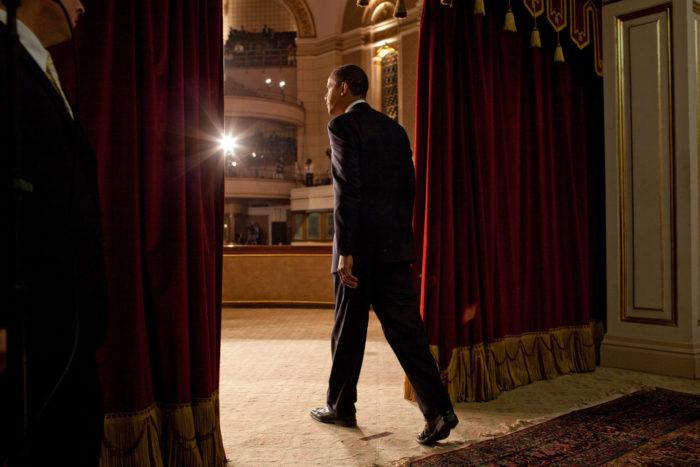 Pompeo, the Christian zealot who sees the U.S. as incapable of doing ill, cannot objectively consider or perhaps even understand Obama’s positions. He dismisses them as a “misreading” of history. Obama’s brief and, in truth, largely ineffective, wavering from traditional Middle East foreign policy had, in Pompeo’s view, introduced “the age of self-inflicted American shame.” If Pompeo is short on historical understanding, he is long on hyperbole.

One of Pompeo’s more disquieting propositions is that “when America retreats, chaos often follows.”

Alas, at least in the Middle East, the exact opposite is true—chaos comes from invasion. This can be demonstrated by the consequences of the actions of President George W. Bush. It was Bush’s invasion of Iraq, the results of which were predictable, that opened the region to chaos, including the growth of ISIS. The Iraq invasion also opened the flood gates of an ongoing refugee crisis (which the Syrian civil war—arguably prolonged by U.S. involvement—made even worse). Subsequent intervention in Libya, under Obama’s watch, only intensified the turmoil. However, none of these actions, or the misery they inflicted, seems have bothered the Christian sensibilities of Pompeo.

Examining the history of events can give us guides, albeit imperfect ones, for present policies and behaviors. A necessary precondition to making the most of this examination is the ability to do so as objectively as possible. Otherwise, to use Pompeo’s phrasing, we end up “making bad mistakes.” Part of the process is to be able to recognize the actual causes of events and to know when to discard traditional practices that no longer take you where you want to go.

Yet here is Secretary of State Mike Pompeo insisting, on the one hand, on maintaining outworn policies that support dictators. These policies have not produced the stability he thinks they have, but have rather helped bring about the very chaos he attributes to Obama. On the other hand, his Christian fundamentalism has blinded him to any objective understanding of Middle East history and America’s role in that region. That is why he ends up stating contradictions. For instance, toward the end of his talk he tells us (No. 1) “the Trump administration will also continue to press for a real and lasting peace between Israel and the Palestinians” and (No. 2) “we’ve adhered to our word. President Trump campaigned on the promise to recognize Jerusalem—the seat of Israel’s government—as the nation’s capital. In May, we moved our embassy there.” Those two statements are in direct contradiction to each other. However, Pompeo misses this fact entirely. This is a product of ideology compounded by ignorance. 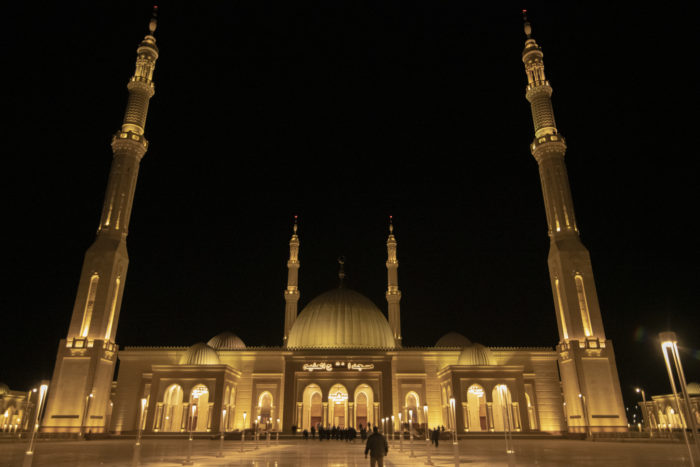 This being the case, Mike Pompeo and Donald Trump make for strange bedfellows. Of course, both are ignorant. But, the nearest thing Trump has to an ideology is his egotism and that infamous “gut” of his that ostensibly tells him what is right and wrong. He certainly is not a believing Christian nor even an American chauvinist, but rather he is a personal chauvinist who thinks of himself as a personification of the U.S.

If Pompeo and Trump share anything (besides ignorance), it seems to be a firm dislike for everything connected to Obama. We know that Trump may well be obsessed with Obama, perhaps for racist reasons. As one Democratic Party adviser has noted, “His [Trump’s] only guiding principle seems to be to undo what Obama did. His driving motivation seems to be his animosity towards Obama.” Mike Pompeo seems in lockstep with his boss in this regard. After all, Pompeo went out of the way to indict Obama, blaming him for the death of thousands, and doing so in the same city where Obama gave his most promising Middle East initiative. Pompeo’s actions in this regard were personal and spiteful.

So here we have it. What motivates Secretary of State Mike Pompeo: (No. 1) Christian zealotry (No. 2) American exceptionalism and (No. 3) a personal dislike of the first black president of the United States. In terms of the position he holds in the government, this is a losing combination for the rest of us. Personally, I would not trust this man to guide the ongoing relationships between my own neighbors and me, so you can imagine my horror at having to put up with him as secretary of state.