In a story worthy of the great Russian novelist Ivan Turgenev, in the Bushes’ case the sins of the son were visited upon the father, who neglected an opportunity to stop them from happening, as Ray McGovern explains.

Picture the late George H. W. Bush being welcomed with open arms last night by three of the Gang of Six white-collar criminals he pardoned on Christmas Eve, 1992, just before he left office. Waiting for him were former Defense Secretary Casper Weinberger, plus swashbuckling, CIA covert action chieftains “Dewey” Clarridge and Clair George — all of them charged (and George convicted) of perjury.

What a celebration is in store when the other three of the gang eventually join them. They are Robert McFarlane, the CIA’s Alan Fiers, and former Assistant Secretary of State Elliott Abrams — all of whom had already pleaded guilty to withholding information from Congress before Bush Sr. let them off the hook.

It caused an outcry in some circles, as The New York Times reported: “Bush Pardons 6 in Iran Affair, Aborting a Weinberger Trial; Prosecutor Assails ‘Cover-Up.’” 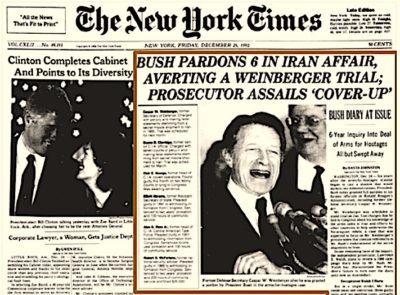 Cover-up indeed. George H. W. Bush was up to his neck in the crimes of Iran-Contra, and so was his protege, Bobby Gates. Gates was so demonstrably involved that he had zero chance of being confirmed as CIA director the first time it was tried. In 1991, Bush had to move mountains to get him confirmed. Gates knew where the bodies were buried, so to speak, and could be counted on to keep them six feet under. (I learned all this well after I spent four years, from 1981 to 1985, for the CIA briefing then-Vice President Bush with The President’s Daily Brief.)

At risk of stating the obvious, is it not clear that, by the time the Supreme Court made Bush Jr. president, CIA operatives had long since internalized the idea they could literally get away with murder? It is not widely known, but several of the detainees in CIA custody following 9/11 died under torture. This came despite the lawyerly advice of Jonathan Fredman, Esq, chief counsel to CIA’s Counterterrorist Center on torture guidelines.

On October 2, 2002 Fredman briefed interrogators at Guantanamo to resolve questions they had about unfamiliar interrogation techniques, like water-boarding. With creepy nonchalance, Fredman claimed (falsely) that “the language of the [torture] statutes is written vaguely,” and summed up the legalities in this way: “It is basically subject to perception. If the detainee dies, you’re doing it wrong.”

Needless to say, the Nicaraguan Contras, whom Bush Senior and his favorite CIA, now-pardoned, covert action operatives supported, paid no heed to such niceties in the violence facilitated by the crimes of Iran-Contra.
We are not supposed to blame sons for the sins of the father. And vice versa, we should also be careful not to blame fathers for the sins of sons. Nevertheless, it’s difficult to give Bush 1 total absolution in this case, as I found out after I wrote Bh Sr. suggesting that junior had fallen in with bad companions and that the consequences would likely be serious. 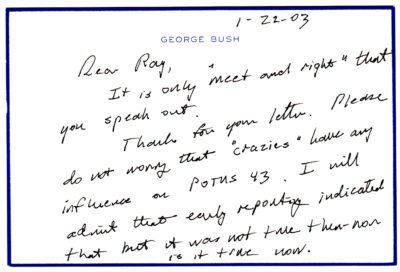 George H. W. Bush and I had a longstanding professional and, later, cordial relationship. For many years after he stopped being president, we stayed in touch — mostly by letter. On January 11, 2003, as the invasion of Iraq was gaining momentum, I wrote a letter to the elder Bush asking him to speak “privately to your son George about the crazies advising him on Iraq,” adding “I am aghast at the cavalier way in which the [Richard] Perles of the Pentagon are promoting the use of nuclear weapons as an acceptable option against Iraq.”

My letter continued: “That such people have the President’s ear is downright scary. I think he needs to know why you exercised such care to keep such folks at arms length. (And, as you may know, they are exerting unrelenting pressure on CIA analysts to come up with the ‘right’ answers. You know how that goes!)”

His reassuring answer–not to worry about any influence the “crazies” might have on his son was a great disappointment.

The elder Bush may not have been fully conscious of it, but he was whistling in the dark, having long since decided to leave to surrogates like former national security adviser Brent Scowcroft and former Secretary of State James Baker the task of highlighting publicly the criminal folly of attacking Iraq.

Or the father may have tried privately; who knows.  It was, in my view, a tragedy that he did not speak out publicly.  He would have been very well aware that this was the only thing that would have had a chance of stopping his son from committing what the Nuremberg Tribunal defined as “the supreme international crime.”

Junior is the poster child for the crying need in this country for basic instruction on parenting. See what “Mission Accomplished” looks like in the Middle East today.

After the invasion, Bush Sr. somewhat came to his senses, blaming his sons’ “iron-ass advisers”–namely Messrs. Cheney and Rumsfeld—for the disaster.

It didn’t get Senior off the hook. A lot of damage W. caused can be attributed — pure and simple — to poor parenting.

Ray McGovern works with Tell the Word, a publishing arm of the ecumenical Church of the Saviour in inner-city Washington. He worked for the senior Bush when he was director of the CIA and then briefed him mornings, one-on-one, with the President’s Daily Brief during the first Reagan administration. In Jan. 2003, Ray co-founded Veteran Intelligence Professionals for Sanity (VIPS) and still serves on its Steering Group.

48 comments for “The Bushes: Fathers and Sons ( With Apologies to Turgenev)”