The great lie about the Rwandan bloodbath opened the door to a far larger genocide in Congo and helped justify U.S. military interventions in Libya and Syria, argues Ann Garrison.

During a recent campaign event, Florida Senator Bill Nelson said, “That story of Rwanda is very instructive to us because when a place gets so tribal that the two tribes won’t have anything to do with each other, and that jealousy turns into hate—we saw what happened to the Hutus and the Tutsis in Rwanda, it turned into a genocide. A million people hacked to death within a few months. And we have got to watch what’s happening here.”

That got a lot of headlines even though U.S. ethnicity is binary only if seen as white vs. everybody else. Whatever Sen. Nelson meant, those who do see it that way have certainly gained prominence since Trump took the White House.

That was a newly minted reference to the Rwandan genocide in U.S. discourse, however. Rwanda is most often remembered in urgent calls for “humanitarian intervention,” a.k.a. war, to stop another genocide. We’re told that the U.S. failed to stop Rwanda’s 1994 genocide, so we’re now obliged to “intervene” anytime and anywhere another genocide is underway. That’s why, we’re falsely told, the U.S. and its NATO allies had to bomb Libya into ongoing chaos in 2011. That’s why Lockheed Martin had to step up production of cruise missiles to drop on Syria. That’s why Sens. Cory Booker and Elizabeth Warren, both 2020 Democratic presidential hopefuls, became initial co-sponsors of an Orwellian bill to “enhance” our government’s ability to “prevent genocide and mass atrocities” with military force: Senate Bill 1158, the Elie Wiesel Genocide and Atrocities Prevention Act of 2018. 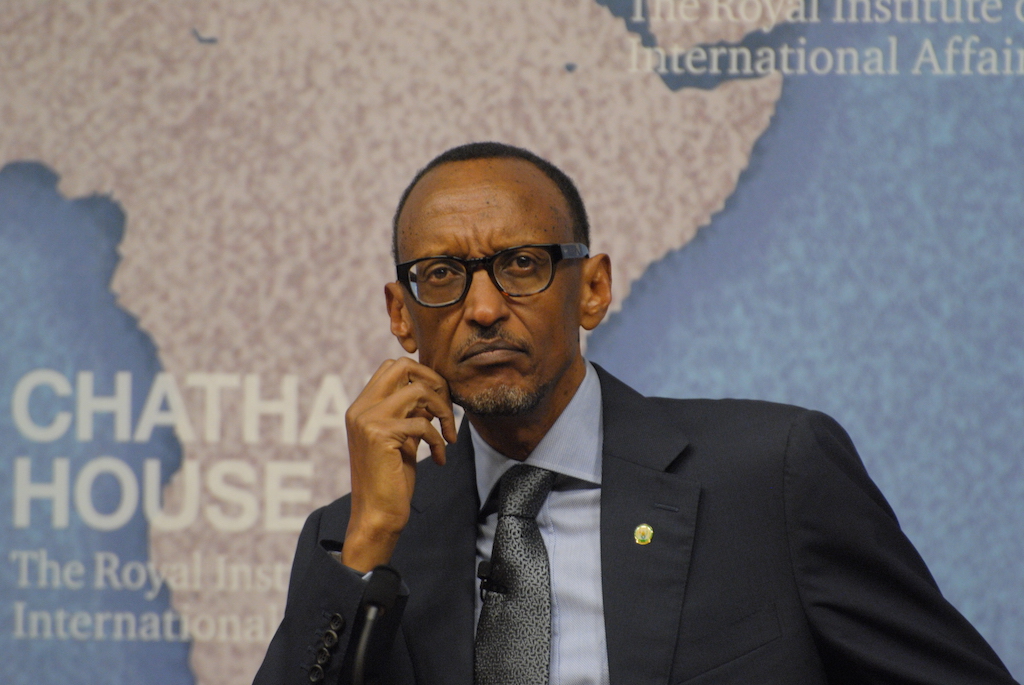 Paul Kagame, the president of Rwanda. (Chatham House / CC BY 2.0)

More soberly, given the lies we’ve all been told in order to start wars, doesn’t it seem likely that this story—that the U.S. failed to stop the Rwandan genocide—is one more? Not that the genocide didn’t happen and not that it wasn’t a terrible tragedy, but the story we were all told and Bill Clinton’s crocodile tears about his “worst mistake” are a lie. In fact, the U.S. and United Kingdom backed Gen. Paul Kagame’s invasion of Rwanda from Uganda on Oct. 1, 1990, and prevented a United Nations intervention until he and his army had massacred their way to Rwanda’s capital, Kigali, to seize power on July 4, 1994.

Just over three weeks later, on July 28, The New York Times reported that the “U.S. Is Considering a Base in Rwanda for Relief Teams.” Kagame has been a key U.S. ally and “military partner” ever since. He not only collaborated with the U.S. Africa Command (AFRICOM) but also invaded the Democratic Republic of the Congo, left millions dead, and thus created new opportunities for U.S. mining corporations.

Professor Edward S. Herman and researcher and author David Peterson deconstructed the propaganda about Rwanda in “The Politics of Genocide“ and “Enduring Lies: The Rwandan Genocide 20 Years On.” In “Enduring Lies,” they wrote:

“The institutionalization of the ‘Rwandan genocide’ has been the remarkable achievement of a propaganda system sustained by both public and private power, with the crucial assistance of a related cadre of intellectual enforcers. The favorite weapons of these enforcers are reciting the institutionalized untruths as gospel while portraying critics of the standard model as ‘genocide deniers,’ dark figures who lurk at the same moral level as child molesters, to be condemned and even outlawed.”

Ed Herman and I had many conversations about this before his death in November 2017, including one on KPFA Radio’s “Project Censored Show” on New Year’s Day 2016. The transcript was published by the San Francisco Bay View, Black Agenda Report and Global Research.

More recently, former Agence France Presse and Radio France International journalist Judi Rever broke down the simple story of Tutsi victims, Hutu perpetrators in her book “In Praise of Blood: Crimes of the Rwandan Patriotic Front.” Here’s some of what she told the Canadian Broadcasting Corporation after the book’s publication:

Judi Rever: He [Kagame] did not stop the genocide because at the same time that ethnic Tutsis were being killed in Hutu-controlled zones, his Tutsi troops were killing with equal zeal and organization. And in every zone that the Rwandan Patriotic Front and its army entered, they killed massively and in an organized way.

Judi Rever: Killed Hutus. They also fueled the genocide against the Tutsis. They infiltrated the Hutu militias very successfully, and they baited the violence. They egged on the violence, but they also—some of their commandos—participated in the slaughter of Tutsis at roadblocks.

Kagame knowingly ordered and encouraged Tutsi massacres to build a storyline that would justify his Tutsi minority dictatorship after he’d seized power and control of the country’s electoral apparatus. Had he proceeded to real elections, as mandated by the Arusha Accords signed to end the war, the Hutu majority would have elected a Hutu president. Former Rwandan Foreign Minister Jean-Marie Ndagijimana tells the same story from a different standpoint in “How Paul Kagame Deliberately Sacrificed the Tutsi.” Most of these victims were poor Tutsis who had been left behind when the wealthy and aristocratic Tutsis fled to Uganda during the Hutu Peasant Revolution of 1959-1961.

Rever’s conclusions are based on years of research and interviews, many of them with RPF troops who were tormented by memories of what they had done and felt compelled to confess. Her book also includes accounts of how she, her husband, and even her children were threatened while she was researching it, and how Belgian security operatives accompanied her everywhere during a research trip to Brussels to interview political exiles and refugees. 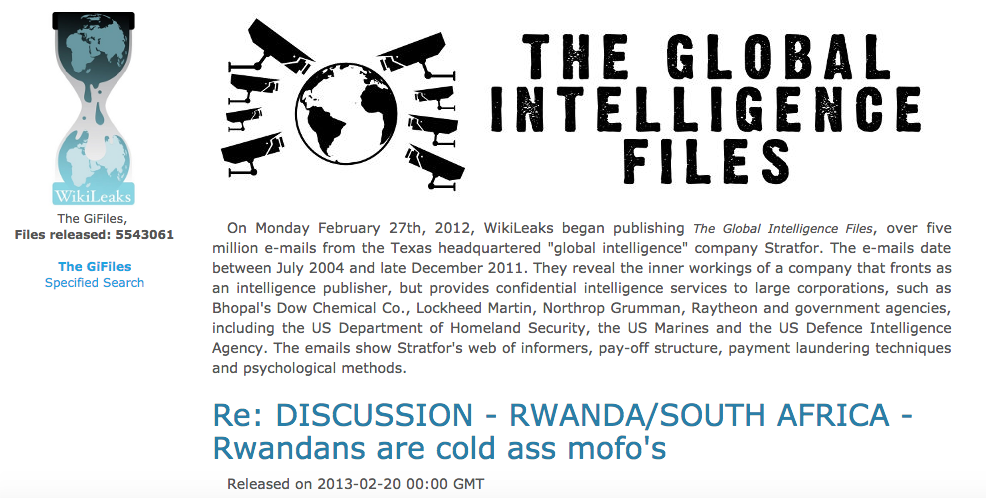 In an email released by WikiLeaks, a Stratfor intelligence analyst said that “Rwandans are cold ass mofos“ and detailed Rwandan operatives’ transnational assassinations and assassination attempts. Their targets are almost always high-profile figures who, like Rever, challenge the story of Tutsi victims and Hutu perpetrators that is so essential to Kagame’s survival and international stature.

I myself haven’t feared for my life at the hands of Rwandan operatives, but I did file an assault complaint after a dustup with Kagame’s contingent at Sacramento State University’s 2011 Third International Genocide Conference.

Despite all this, the propaganda has been so effective that the standard story of Tutsi victims, Hutu perpetrators, and Bill Clinton’s failure remains all but unassailable in mainstream media. It’s in the Wikipedia, where a host of “edit alerts” assure that any attempt to change it starts a tireless “editing war” that Wikipedia moderators will finally shut down with no changes made. It’s at the heart of former U.N. Ambassador Samantha Power’s interventionist bible, “A Problem from Hell: America and the Age of Genocide.” It’s in Obama’s 2011 Presidential Study Directive on Mass Atrocities and “Mass Atrocities Response Operations: A Military Handbook,” which was produced by the Pentagon and Harvard’s Carr Center for Human Rights with help from Pierre Omidyar’s Humanity United Foundation. And it’s in the template of every Reuters and AP newswire that ever touches on the subject.

I was nevertheless surprised when RT repeated the standard propaganda as well. Mightn’t one expect RT to dig a little deeper into a narrative used to justify the U.S. war in Syria among others? RT asked me to comment on a news story about the recent appeal of a French court’s ruling that French soldiers were not criminally complicit for failing to protect Tutsis massacred at Bisisero, Rwanda, in 1994. I agreed, so they called me on Skype, but the host and I proceeded to frustrate one another, and most of what I said was left on the cutting room floor. CIUT 89.5 FM-Toronto host and former ICTR investigator Phil Taylor sent me a consolation note saying, “I felt for you, Ann. I saw the item in real time and slapped my forehead. The cutting was done with shears.”

Basic journalistic ethnics and not wanting to be misrepresented compelled me to write about why this interview turned into such a hot mess after beginning with the usual false recitation:

I told RT that the context of the 1994 Bisesero massacre was a four-year war that began on Oct. 1, 1990, when a detachment of the Ugandan Army led by then General, now President, Paul Kagame invaded Rwanda from Uganda. I said that those Ugandan troops were Rwandan Tutsis or the children of Rwandan Tutsis  who had fled to Uganda between 1959 and 1961, when the Hutu majority finally liberated themselves from centuries-long domination by the Tutsi minority.

I said that focusing on this single tragic incident, the Tutsi massacres at Bisesero, imposed the propaganda narrative about the Rwandan genocide on their story.

I said that France’s Operation Turquoise had created a humanitarian corridor for civilians fleeing to Congo in terror of Kagame’s advancing army, so it was a distortion to discredit the French troops over this one incident in which they were accused of failing to act even though it wasn’t clear they had a mandate. (UN Security Council Resolution 929 (1994) gave the operation the aim of “contributing, in an impartial way, to the security and protection of displaced persons, refugees, and civilians at risk in Rwanda.”)

I considered quoting Ed Herman, David Peterson, and Judi Rever, but ran out of time. That was more complexity than RT appeared to want added to their news story. They had already built it on the widely received account of what happened in Rwanda before calling me. Having produced radio news, I know the show must go on at the scheduled hour even if it could be improved. Had they nevertheless considered that there might be something wrong with their premises? I’m only encouraging them to review this Western narrative as they do so many others.

This article was originally published on Black Agenda Report.

Ann Garrison is an independent journalist based in the San Francisco Bay Area. In 2014, she received the Victoire Ingabire Umuhoza Democracy and Peace Prize for her reporting on conflict in the African Great Lakes region. She can be reached at ann@anngarrison.com.