Recently declassified documents show that the former CIA director and former director of national intelligence approved illegal spying on Congress and then classified their crime. They need to face punishment, writes John Kiriakou.

Republican Sen. Chuck Grassley, the longtime chairman of the Judiciary Committee, made a dramatic announcement Nov. 1 that should lead to jail time for both former CIA Director John Brennan and former Director of National Intelligence James Clapper.

As reported, but widely overlooked amid the media focus on the midterm elections, Brennan ordered CIA hackers to intercept the emails of all potential or possible intelligence community whistleblowers who may have been trying to contact the congressional oversight committees, specifically to the Senate Select Committee on Intelligence and the Senate Judiciary Committee.

Brennan and Clapper, in 2014, ostensibly notified congressional overseers about this, but in a way that either tied senators’ hands or kept them in the dark. They classified the notifications.

As a result, Grassley knew of the hacking but couldn’t say anything while senators on neither the Intelligence or Judiciary Committees didn’t know.

For all of this—for the hacking in the first place, and then the classification of that criminal deed—both men belong in prison.

But this would be a good place to start. 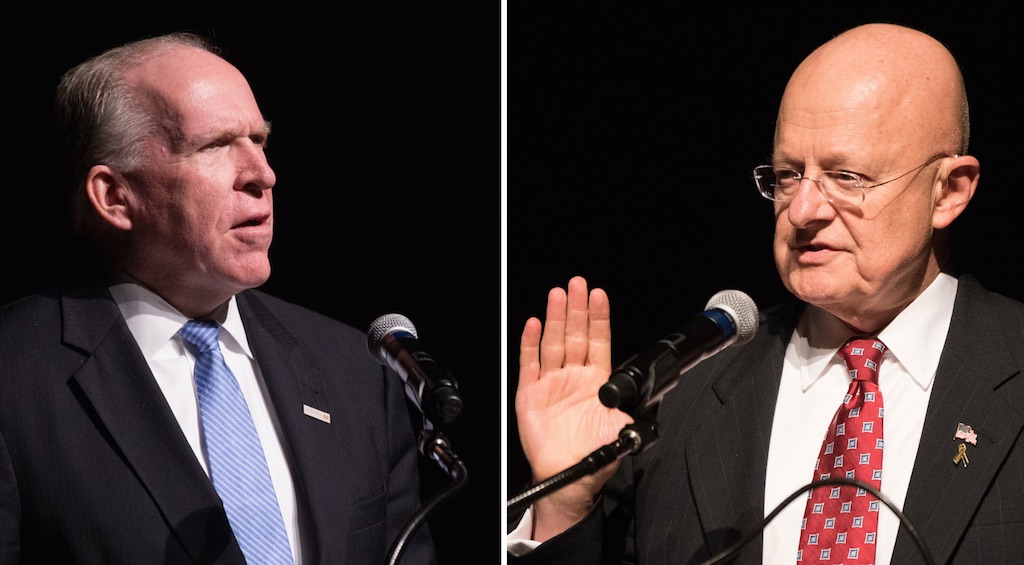 Brennan has flouted U.S. national security laws with impunity for years. It was Brennan who, as CIA director, ordered CIA computer hackers to break into the computer system of the Senate Intelligence Committee while its investigators were preparing a declassified version of the Senate Torture Report Executive Summary. It was also Brennan who maintained President Obama’s “kill list” of people designated for assassination, including American citizens, without the benefit of due process.

Clapper infamously denied to Senator Ron Wyden in an open hearing of the Senate Intelligence Committee that NSA was spying on American citizens. When he was finally challenged on his lie, he said that saying no was “the least dishonest response” he could think of.

There is a strong public interest in [the] content [of the two notifications], Grassley said, adding their content should be released in their entirety. “What sources or methods would be jeopardized by the declassification of these notifications? After four-and-a-half years of bureaucratic foot-dragging, led by Brennan and Clapper, we finally have the answer: None.”

Grassley began trying to get these two notifications declassified four years ago. The Iowa senator said that during the last two years of the Obama administration the Intelligence Community Inspector General—a monitoring entity established in 2010—repeatedly ignored his requests to release the information.

This time, after the exit of the Obama people, the request was approved.

There is hyper-partisan sensitivity around Brennan, who has publicly denounced Trump and is widely understood to be a leading source in the spy community pressing the idea that the Trump colluded with the Russians’ interference in 2016 the elections.

Partisan passions, however, should have no place in all this.

What should matter is the law and the efforts by these two men to place themselves above it.

The CIA is required by law to inform congressional oversight committees whenever one of its officers, agents, or administrators breaks the law, when an operation requires congressional approval because it is a “covert action” program, or whenever something happens at the CIA that’s potentially controversial and the agency wants to save itself the embarrassment of explaining itself to Congress later.

“I could see no reason to withhold declassification of these documents.” Grassley said. “They contained no information that could be construed as [betraying] sources and methods.”

Brennan was the leading force behind the prosecutions of eight national security whistleblowers during the Obama administration, almost three times the number of whistleblowers charged under the Espionage Act by all previous presidents combined.

Indeed, I was one of the “Obama Eight.” I was charged with five felonies, including three counts of espionage, after I blew the whistle on the CIA’s torture program. Of course, I hadn’t committed espionage and those charges were eventually dropped, but not until I had agreed to take a plea to a lesser charge. I served 23 months in a federal prison.

Brennan and Clapper think the law doesn’t apply to them. But it does. Without the rule of law, we have chaos. The law has to apply equally to all Americans. Brennan and Clapper need to learn that lesson the hard way. They broke the law. They ought to be prosecuted for it.

140 comments for “Brennan and Clapper Should Not Escape Prosecution”