With an apparent nod from the U.S., the Ecumenical Patriarch’s ruling from Istanbul severed 1000-year ties between Moscow and the Orthodox church in Ukraine, raising further tensions between Kiev and Moscow, as Dmitry Babich reports.

The Istanbul-based Ecumenical Patriarch Bartholomew I of Constantinople, an authority completely outside Ukraine, on Oct. 11 stripped away the canonical authority of the Ukrainian Orthodox Church—Moscow Patriarchate (MP), sparking a crisis with Russia.

The 1030-year old church is headed by Patriarch Kirill in Russia and the Russian church responded by severing ties to the Istanbul patriarch. Tensions have now been raised even further in the crisis between Ukraine and Russia that erupted after the U.S.-backed 2014 coup in Kiev that overthrew an elected president who tilted towards Moscow.

In Washington, the events were reported in The Washington Post as part of Ukraine’s struggle to “withdraw from Moscow’s control.” In Europe, Italy’s Deputy Prime Minister and Minister of the Interior Matteo Salvini made the sober warning in the Austrian newspaper Der Standard that the religious interference in Ukraine could provoke a war.

Bartholomew’s action is seen as a first step to giving full autonomy, known as “autocephaly” in the Orthodox faith, to the Ukrainian Orthodox Church of Kiev Patriarchate (KP), a heretical split-off that was created only in 1992 just after the dissolution of the Soviet Union and Ukraine’s independence.

The KP church is headed by a self-styled leader named Mikhail Denisenko, who goes by the name Patriach Filaret. He is a defrocked former bishop in the Moscow Patriarchate of Ukraine. 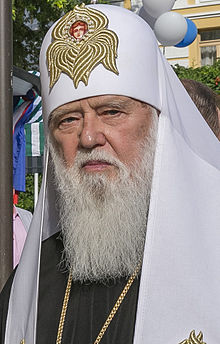 The MP’s lineage goes back to the tenth century Christian conversion of all the people of Kievan Rus, the proto-state that was precursor to the nations of Russia, Ukraine and Belarus. Its authority in Ukraine was established in 1686 by the same Constantinople Ecumenical Patriarchate.

Bartholomew reversed his seat’s own 332-year-old decision. While the Ecumenical Patriarch is known as “the first among equals,” among Orthodoxy’s 14 autocephalic churches, he has no authority to rule over them. Unlike Roman Catholicism, Orthodoxy has no single church authority that can impose decisions over all the others.

The 14 churches are supposed to be independent of governments. But in Ukraine, Petro Poroshenko, the anti-Russian president installed after the coup, and other government forces, are using the ruling to further erode Russian influence.

Members of the Moscow church in Ukraine have already been the targets of violent assaults by thugs trying to disrupt worship services, and such conflict is being fueled by politicians’ rhetoric.

In October, when Constantinople lifted Denisenko’s ex-communication, Poroshenko called the decision “a victory of good over evil, light over darkness.” He also said that recognition of the renegade Ukraine church would mean severing all links to Orthodox Russia and its “Moscow demons,” reported gazeta.ru.

Bartholomew’s decision didn’t come out of thin air, and the geopolitical implications are clear: breaking Russia’s ties to the Ukrainian people. This was demanded by Poroshenko, and supported by Denisenko, whose church has never been recognized by the 14 other churches.

On Oct. 31, Denisenko made his view clear in a statement to RFE/RL. “We will be striving to have a single Orthodox Church in Ukraine and to make sure that the Russian [Orthodox] Church is not hiding under the Ukrainian name while, in essence, it is Russian,” he said.

“Constantinople’s decision is aimed at destroying unity,” Kirill explained, as reported in Russian language media. “We can’t accept it. That is why our Holy Synod took the decision to stop eucharistic communication with the Constantinople Patriarchate.” He added that the attack against the Orthodox in Ukraine “was having not only a political, but also a mystical dimension.”

He called for faithfulness to the canonical church, the Moscow Patriarchate, and says he’s “ready to go anywhere and talk to anyone” to prevent the schism among the Orthodox inside Ukraine and remove barriers separating the faithful in the two countries.

The break in eucharistic communication means that the priests of the two patriarchates won’t be able to hold church services together.

While Western media have played the break as an aggressive act by Moscow, the reality is more complex. The Russian Orthodox Church is the largest congregation among the approximately 300 million Eastern Orthodox Christians, and Kirill went to Istanbul to meet the Ecumenical Patriarch in August to try to avert any actions that would harm the unity.

Metropolitan Hilarion, chief spokesman on questions of schism and unity for the Russian Orthodox Church in Moscow, explained, “For a church with more than 1000 years of history and ancient monasteries of some 500 to 900 years of age, the perspective of merging with some unrecognized entities, formed 20 years ago, is unacceptable.”

On October 31, Russian President Vladimir Putin referred to the action against the Ukrainian church in remarks to the World Congress of Russian Compatriots, an organization uniting people of Russian origin from all over the world. “Politicking in such a sensitive sphere as religion has always led to grave consequences, first and foremost for the people who got involved in this politicking,” he said. He also referenced a “war” on Russian historical monuments by some forces in Ukraine.

In the past year, discussions were held by U.S. officials with Poroshenko and Denisenko. Ambassador at Large for International Religious Freedom Sam Brownback, and Assistant Secretary of State for European and Eurasian Affairs Wess Mitchell met with Denisenko in September. Then on Oct. 17, a press release in the name of Secretary of State Mike Pompeo called for religion in Ukraine to be “without outside interference.”

Dmitry Babich is a multilingual Russian journalist and political commentator. Born in 1970 in Moscow, graduated from Moscow State University (department of journalism) in 1992. Dmitri worked for Russian newspapers, such as Komsomolskaya Pravda and The Moscow News (as the head of the foreign department). Dmitri covered the Chechen war as a television reporter for TV6 channel from 1995 to 1997. Since 2003 he has worked for RIA Novosti, RT, and Russia Profile. Dmitry is a frequent guest on the BBC, Al Jazeera, Sky News and Press TV.