New threats to the safety of Julian Assange, to be disclosed shortly by Consortium News, have prompted an emergency meeting of his supporters.

to Assange to Be Revealed

An alarming series of occurrences have unfolded this week that indicate serious, urgent threats to the physical well-being of WikiLeaks publisher Julian Assange. Those close to the publisher are swiftly moving to address the recent escalations.

The Unity4J movement is calling an emergency meeting for all movement participants, supporters and the public. This will commence on Saturday November 3rd, 2018 at 3pm EST (midday Pacific), via https://unity4j.com/stream

At the meeting, details of these new threats to Julian’s life will be presented, along with the unveiling of a new action plan to secure and protect his life, human rights, and freedom.

A special message from Julian’s mother, Christine Assange will also be broadcasted. 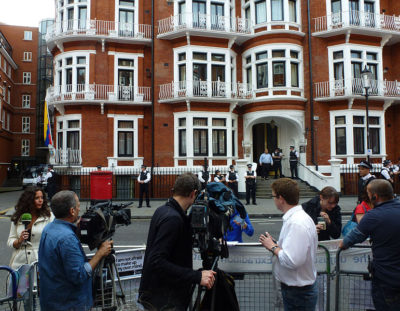 Julian Assange has been arbitrarily detained in the UK for eight years, six of which he has spent as a political refugee in Ecuador’s embassy in London. The United Nations Working Group on Arbitrary Detention has ruled Mr Assange should be immediately freed and compensated. The Inter-American Court of Human Rights has ruled that the UK must facilitate safe passage for him.

#Unity4J is a global mass movement in solidarity with Julian Assange, created in response to Ecuador’s gagging of the publisher. Unity4J has been endorsed by more than fifty high profile activists, journalists, celebrities, academics and former US intelligence officials including Chris Hedges, Jimmy Dore, Ray McGovern, Bill Binney and Daniel Ellsberg.

MEDIA INQUIRIES: Media inquiries and interview requests should be made to Suzie Dawson, via DM on Twitter: @Suzi3D, or by emailing info@unity4j.com

Conspiracy emerges to push Julian Assange into British and US hands https://www.wsws.org/en/articles/2018/05/16/assa-m16.html