There were hate crimes before Donald Trump ran for president, most of them sanctioned by the state, including anti-black violence, as old as white settlement on this continent, says Margaret Kimberley of Black Agenda Report.
American Terror is Not New

The casual, endemic and racist violence that characterizes American behavior at home and abroad cannot be laid at the doorstep of the current buffoon in the White House.

Within the past week very disturbing and violent events took place in quick succession across the country. Two black people were shot to death in a Louisville, Kentucky supermarket. The white shooter made it clear that his goal was to kill black people when he said, “Whites don’t shoot whites,” as he was apprehended. No sooner had this crime occurred than a Florida man was arrested and charged with sending explosive devices to Barack Obama, Hillary Clinton, George Soros, Maxine Waters, and Eric Holder among others. One day later a shooting at a Pittsburgh, Pennsylvania synagogue left 11 people dead.

The unnamed suspect in all of these cases is Donald Trump. The bombing suspect made clear his love for the 45th president. He was described by his attorney as a previously apolitical man who nonetheless “found a father in Donald Trump.” The Louisville killing is the latest in a long line carried out by white racists. Anti-black violence is as old as white settlement on this continent. 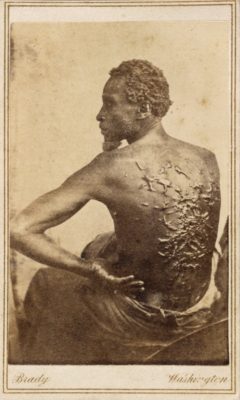 1863 Medical examination photo of Gordon showing his scourged back, widely distributed by Abolitionists to expose the brutality of slavery. (Wikipedia)

Analysis of these recent incidents must be made very carefully. Trump differs from his predecessors mostly by tearing away the veneer of humanity and civility from a system which is relentlessly brutal. But the façade keeps many would-be terrorists from carrying out their sick fantasies. There are people who keep their hatred to themselves until they know that they may be given some cover and acceptance. Hatred expressed by a president emboldens people who might not ordinarily act upon their racist impulses.

It is very dangerous for these hidden haters to think they can come out of their closets. At the same time we cannot forget that a racist shooter succeeded in entering a black church in Charleston, South Carolina and killing nine people in 2015 when Barack Obama was president. The most prevalent racially motivated murders are carried out by police across the country when they kill an average of 300 black people every year.

It is a mistake to see Trump as a singular evil in American history. He is also not an anomaly among world leaders. An avowed fascist just won a presidential race in Brazil. White supremacists march openly in European countries like Ukraine where the Obama administration helped to overthrow an elected president and install Nazis among the new leadership. Fascism is carried out daily not only by the police but by the neoliberal state and by the military as it carries out a war of terror all over the world.

The current moment is perilous and requires serious analysis. Trump is the low hanging fruit in any discussion of racism and other forms of bigotry. But the country cannot be given a pass and allowed to behave as if all was well until he was elected.White people cannot play innocent and black people can’t relax when the day comes that he is out office.

If Trump can be connected to all of these incidents it should be with the knowledge that the entire country is suffering from a terrible sickness that few want to confront. Americans prefer to think well of themselves and their nation and treat any information contradicting that belief as an inconvenience to be avoided at all costs. There were hate crimes before Donald Trump ran for president and most of them weren’t carried out by individuals. Most of them are still sanctioned by the state.

The crazed Trump lover may have tried to send bombs to Obama and Clinton but they sent bombs to Libya and destroyed a nation that still suffers from their terrorist acts. They are quite literally guilty of committing hate crimes, along with other NATO leaders and their predecessors in high places. The fact that they know how to express diplomatic niceties is no reason to see them as being on our side as we fight to defeat fascism at home and around the world.

Their enablers cannot be given a pass either. When we fight to make war and peace a political issue we are derided as purists and spoilers who ought to be quiet and allow imperialism to take place without hindrance. The people who join in the chorus of denunciation should not be allowed to wring their hands when dead bodies appear within our borders too.

If they want to denounce Trump they had an excellent opportunity recently. Trump announced that the United States was withdrawing unilaterally from the INF missile treaty with Russia. This decision quite literally puts the world closer to nuclear war. But the liberal Trump haters have had very little to say about a policy change which quite literally endangers all life on the planet. The numbers of people who realize the danger and speak against this action is minuscule, unlike the near unanimous condemnation of racist gun men and the would-be mail bomber.

We have always lived in a very dangerous nation. Trump makes it more difficult to be in denial. But we must fight against the crowd which averts its eyes until a racist buffoon enters the White House. There is nothing new about American terrorism. It can be found in high and low places regardless of presidential civility or lack thereof.

This article originally appeared on BlackAgendaReport.com

Margaret Kimberley’s Freedom Rider column appears weekly in BAR, and is widely reprinted elsewhere. She maintains a frequently updated blog as well at http://freedomrider.blogspot.com . Ms. Kimberley lives in New York City, and can be reached via e-Mail at Margaret.Kimberley(at)BlackAgendaReport.com.

39 comments for “American Terror is Not New”