America’s miserable record over 30 years should make it clear a serious and genuine commitment to the rule of international law offers a more viable way forward than the “law of the jungle,” argue Nicolas Davies and Medea Benjamin.

Across the arc of chaos and instability caused by U.S. wars, interventions and sanctions around the world, the past several weeks have seen new flare-ups of deadly violence and worsening humanitarian crises.

The last article, by Voice of America, reported that General Austin Miller is taking command of 14,000 U.S. troops in Afghanistan as they soldier on in the “graveyard of empires” after 17 years of war. In the heady days after the Soviet withdrawal from Afghanistan in 1989 and the end of the Cold War, who would have predicted that America would soon be mired in its own quagmire in Afghanistan or that the fall of the Berlin Wall would usher in an era of U.S. wars that would sow violence and chaos across so much of the world?

And yet, it was precisely in those heady days at the end of the Cold War that what Mikhail Gorbachev has called Western “triumphalism“ was born. In the bowels of the Pentagon, in corporate-funded Washington think tanks and in offices in the White House under Republican and Democratic administrations, ideologues linked to both parties dreamt of a Pax Americana or a New American Century in which the U.S. would be the unchallenged, even unchallengeable, imperial power.

Two former cold warriors, President Johnson’s Secretary of Defense Robert McNamara and President Reagan’s Assistant Secretary of Defense Lawrence Korb, told the Senate Budget Committee in 1989 that the U.S. military budget could safely be cut in half over ten years. Committee Chairman Senator Jim Sasser hailed “this unique moment in world history” as “the dawn of the primacy of domestic economics.” 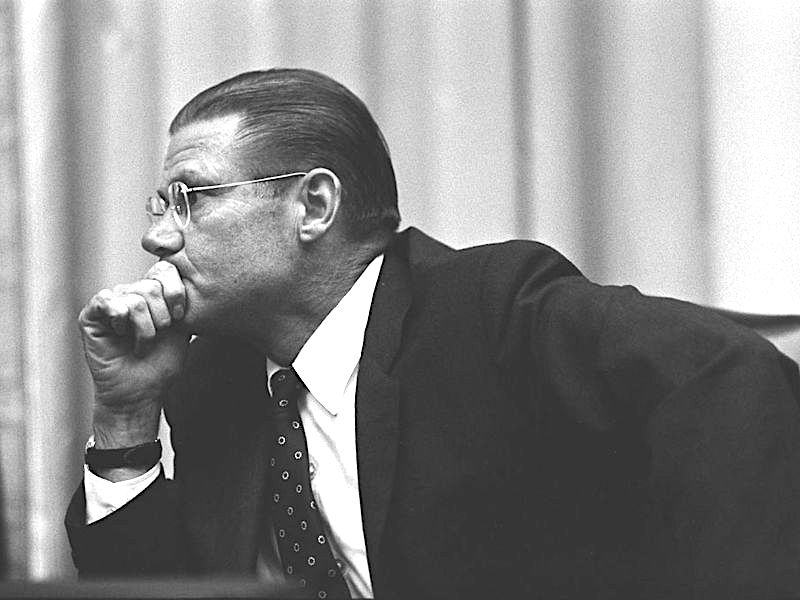 Instead, despite small cuts in the early 1990s, the military budget never fell below the Cold War baseline established after the Korean and Vietnam Wars, and began climbing again in 1999. The longed-for, post-Cold War “peace dividend” was trumped by a “power dividend” born of triumphalism, wishful thinking and the “disastrous rise of misplaced power” in the military-industrial complex that President Eisenhower recognized and warned against in his farewell speech to the nation in 1961.

Many who embraced the enticing vision of “monopoly leadership and domination,” as Gorbachev called it, wanted to believe that a world ruled by American economic and military power would be a reflection of the best in American society. But these privileged members of the liberal elite were quite blind to the endemic injustices inside the United States, let alone the reality of life in the farther reaches of America’s neocolonial empire, policed by head-chopping kings, corrupt dictators and murderous death squads.

John Bolton and the neocons were not so idealistic. They simply believed that the U.S. could use its many forms of economic, military and ideological power to impose a new world order that dissenters around the world would be powerless to resist. U.S. dominance would often have to be imposed by force, but resistance would be futile as long as America’s leaders kept their nerve and were prepared to use as much force as necessary to impose their will.

This would require brainwashing new generations of Americans to fill the ranks of a poverty draft of imperial troops and an even larger army of passive consumers, taxpayers and voters who would embrace whatever dreams corporate America and its captive political and media systems conjured for them. Fortunately, the new generation is proving more intelligent, creative and revolutionary than the neocons imagined.

The central dystopian fantasy of the people who have run America for the past generation, drunk on these toxic cocktails of idealism and cynicism, is that the United States can govern the world as a preeminent, supranational economic and military power, exercising the kind of  “monopoly on violence” that national governments claim the right to within their own territory.

In this worldview, when the U.S. uses violence, it is legitimate, by definition; when U.S. opponents use violence, it is illegitimate, also by definition. Noam Chomsky refers to this as “the single standard,” but it is the antithesis of an international order based on the rule of law, in which rules and standards would apply equally to all. 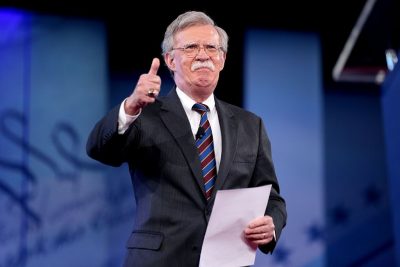 Bolton: Free to commit crimes and and then threaten the police. (Wikimedia)

When Bolton threatened the prosecutors and judges of the International Criminal Court (ICC) with U.S. sanctions and prosecution in U.S. courts, even as he boasted that U.S. efforts to undermine the court have made it “ineffective,” he laid bare the disdain for the rule of international law in America’s “single standard.”

It is not the ICC that “constrain(s) the United States,” but binding multilateral treaties like the UN Charter and the Geneva Conventions, which were signed and ratified by a wiser generation of American leaders and which Article VI (2) of the United States Constitution defines as part of the “supreme law of the land.” The ICC did not invent these treaties, but it is necessary to enforce them, so Bolton’s speech was just a political attack, with no legal basis, to preserve U.S. impunity for war crimes.

In his opposition to the U.S. invasion of Iraq, Senator Edward Kennedy described the 2002 U.S. National Security Strategy, the ideological blueprint for the invasion, as “a call for 21st century American imperialism that no other nation can or should accept.” But Kennedy’s faith that the rest of the world would reject and resist resurgent U.S. imperialism was overly optimistic, at least in the short to medium term.  Despite an international uproar against the US-led invasion of Iraq, the U.S. war machine rolled on, and other countries have made their accommodations with this ugly reality.

Now the U.S. is outsourcing its wars, arming proxies around the world as a substitute for direct U.S. military action. This minimizes both domestic opposition from a war-weary U.S. public and growing international resistance to the catastrophic results of U.S. wars, while U.S. military-industrial interests are well served by ever-growing arms sales to allied governments.

In a new Code Pink report, “War Profiteers: The U.S. War Machine and the Arming of Repressive Regimes,” we explore the links between the U.S. weapons industry and the atrocities that Saudi Arabia, Israel and Egypt have used its products to commit, from bombing school buses, marketplaces and hospitals in Yemen to massacring civilians in Gaza and Cairo.

As we approach the 2018 U.S. midterm election, Bernie Sanders’ 2016 presidential campaign has served as a template for progressive candidates to stake out more radical positions on healthcare, criminal justice reform, college tuition and other domestic issues. Sanders has successfully tested these positions in a national campaign, but there has been precious little talk of what a more progressive U.S. foreign policy would look like.

Congressman Adam Smith, who would likely become the chair of the House Armed Services Committee if the Democrats win a majority in November, has promised to trim the Trump administration’s nuclear weapons ambitions, and to provide more oversight of the U.S. role in Yemen and “special” operations in countries like Niger. 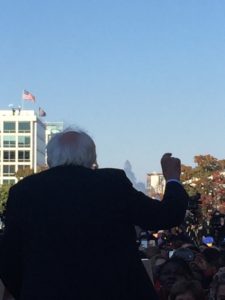 But we believe that the illegitimate and destructive form of U.S. militarism that has evolved since the end of the Cold War requires a much more fundamental rethink, not just some trimming around the edges.  The world desperately needs American progressives to confront the catastrophic results and existential dangers of the “21st Century American imperialism” that the late Senator Kennedy presciently warned against before its violence and chaos become even more widespread and intractable.

So here are three foundations of a progressive U.S. foreign policy that we would ask progressive office holders and candidates to adopt in 2018:

The third item may be a more radical and far-reaching change in U.S. policy: a U.S. agreement to simply be bound by the same rules of international law as our less powerful neighbors.

Under the UN Charter, all nations have agreed to settle their differences peacefully, and the Charter therefore prohibits the threat or use of force unless authorized by the council.  The monopoly on the use of force that the U.S. has tried to claim for itself is already reserved to the UN Security Council, not to any one country, alliance or coalition.

This has never worked perfectly or prevented all wars. Like domestic law, international law is an imperfect and evolving system of laws, courts and enforcement mechanisms.  But all legal systems work best when the rich and powerful submit to their rules, and courts have the authority to hold even the most powerful people, institutions or countries accountable.

As President Roosevelt told a joint session of Congress after his meeting with Churchill and Stalin at Yalta in 1945,

“(The UN) ought to spell the end of the system of unilateral action, the exclusive alliances, the spheres of influence, the balances of power, and all the other expedients that have been tried for centuries—and have always failed. We propose to substitute for all these, a universal organization in which all peace-loving Nations will finally have a chance to join.”

Our miserable record over the past 30 years should make it clear to any doubtful American that a serious and genuine commitment to the UN Charter and the rule of international law offers us a more viable, sustainable and peaceful way forward than our deluded leaders’ reversion to the “law of the jungle” or “might makes right,” which has predictably led only to intractable violence and chaos.

Politicians running in the midterm elections and voters who want to end U.S. wars should adopt and uphold these common sense positions.

Nicolas J. S. Davies is a writer for Consortium News, a researcher with CODEPINK and the author of Blood On Our Hands: the American Invasion and Destruction of Iraq.  Medea Benjamin is cofounder of CODEPINK Women for Peace, and author of several books, including Inside Iran: The Real History and Politics of the Islamic Republic. They have also co-authored War Profiteers: The U.S. War Machine and the Arming of Repressive Regimes for the Divest From the War Machine campaign.

← Letter from Britain: The Real Reason for the ‘Anti-Semite’ Campaign Against Jeremy Corbyn
On the Brink with Russia in Syria Again, 5 Years Later →

42 comments for “Beyond Bolton: The Path to a Progressive Foreign Policy”