Being on the deadly end of his policies, many Arabs view John McCain in a very different way than the U.S. mass media has presented him, as As’ad AbuKhalil says.

It is not unusual that Arabs and Americans look at the same event from divergent lenses. Take, for instance, a scene from John McCain’s 2008 presidential campaign when he told  a woman in the audience who had called Obama an Arab: “No, Ma`am. He is not an Arab. He’s a decent family man.”

That brief exchange has been tweeted and retweeted thousands of time in the last few days following McCain’s death. It has been promoted by people in mainstream media (and think tanks and academia) as evidence of the civility, “classiness”, and lack of prejudice of McCain.  Yet, Arabs saw something entirely different in that exchange.  They saw bigotry from McCain, who was denying that Obama was Arab in the same way one denies that someone is a Nazi.  He clearly implied that an Arab can’t be a decent family man.  In fact, Gen. Colin Powell was the only U.S. politician who pointed this out at the time.  But a new image of McCain is being formulated before our eyes.

For Arabs in the Middle East and in the U.S., the view of McCain does not conform to the hagiography of U.S. media.  People in the region remember well that McCain supported every U.S. and Israeli war, invasion, or attack against any Arab target. They remember that he was a major proponent of invading Iraq and argued for the expansion of U.S. wars into Iran, Libya and Syria in the wake of Sep. 11. 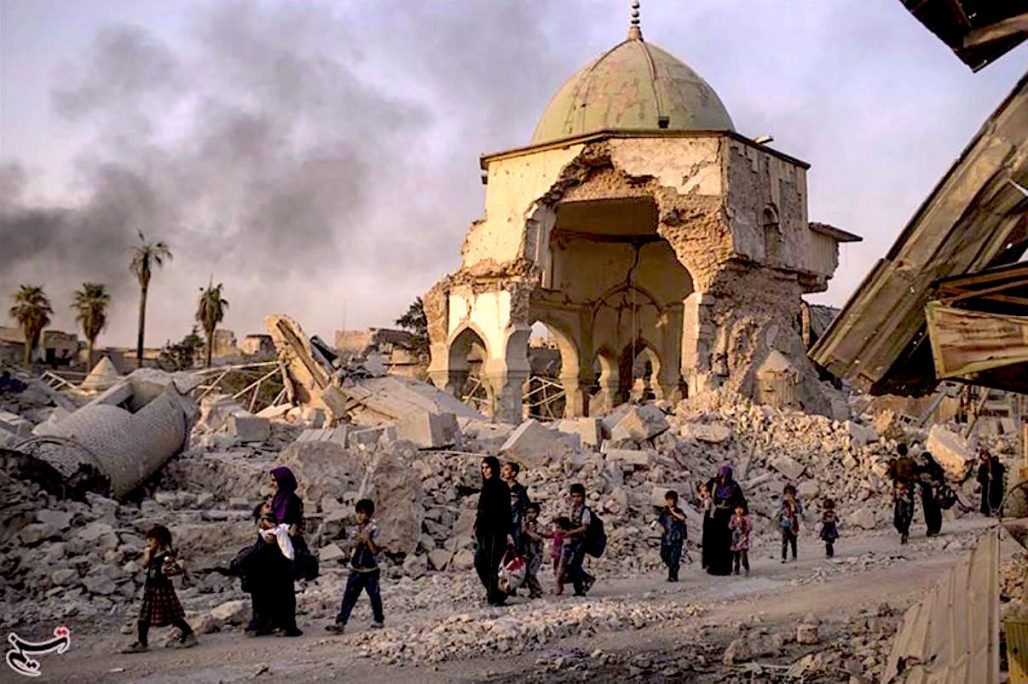 The destruction of Mosul. (Wikimedia Commons)

While the Washington director of Human Rights Watch was writing tributes to McCain, Arabs were remembering him as a champion of Middle East dictators (except those on bad terms with the U.S. and Israel.) It was not a coincidence that both the official Saudi regime lobby in DC and AIPAC promptly released emotional eulogies for McCain. The English-language, Arab Times (a mouthpiece of Saudi Crown Prince Muhammad bin Salman) dedicated a special issue to him.

McCain never wavered in his conformity with AIPAC’s agenda.  He never had disagreements with the Israeli government except in outbidding them in his hostility to Palestinian rights and the usefulness of negotiations with Arabs.

Yet in the context of Washington politics, McCain was not regarded as the anti-Arab/anti-Muslim that he was, perhaps because there were Arabs and Muslims that he approved of. He championed, for instance, Iraqi opposition figure Ahmad Chalabi (a key fabricator in the buildup to the U.S. invasion of Iraq) and the Afghan Muhajedeen. He was very close to Arab despots and approved arms sales to their repressive armies and intelligence apparatuses. He spoke of democracy but in the way that invading and colonizing states glorify “freedom” to justify conquest.

McCain was a champion of Syrian rebels and pictures of him with Jihadi extremists (in Libya and in Syria) were circulated by Arabs on social media in the last week. while the Washington press corps and Human Rights Watch were paying tribute him as “a defender of democracy.” 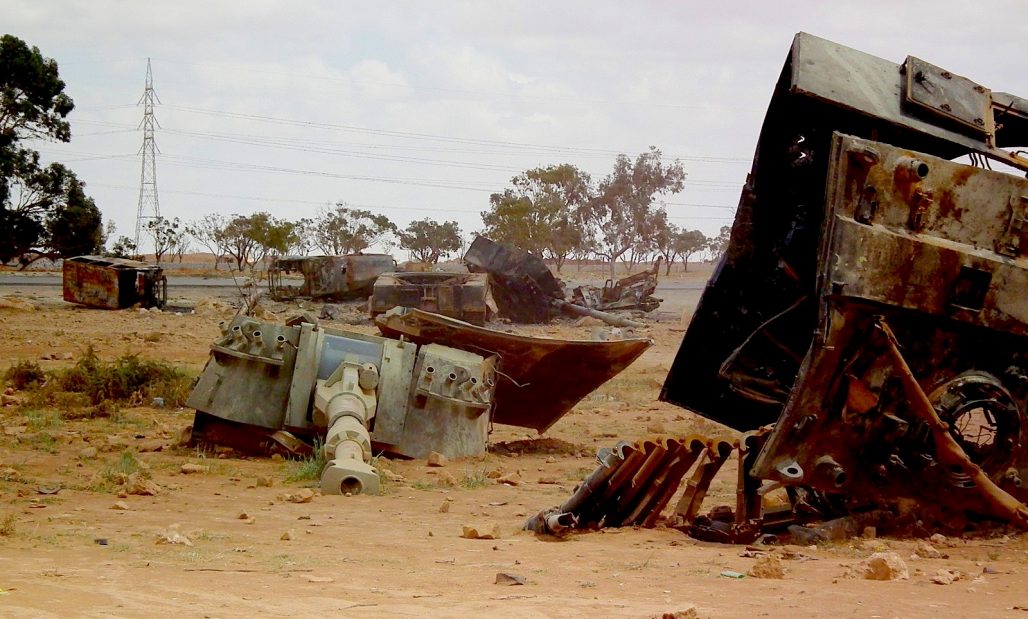 Self-propelled howitzers of the Gaddafi forces, destroyed by French Rafale airplanes at the west-southern outskirts of Benghazi, Libya, in March 2011 in another war backed by McCain. (Wikimedia Commons)

McCain was mentored on the Middle East, according to his biographies, by Henry “Scoop” Jackson, who for years was the dean of ardent Zionists in the U.S. Congress. Those were in the days when a few members—mostly Republicans—dared to challenge AIPAC. McCain’s first trip to Israel was a member of a delegation led by Jackson when McCain was the Navy’s liaison to the Senate.  Typically, like all U.S. politicians who visit Israel, McCain became convinced by  the view from Israeli military helicopters of the vulnerability of “little Israel” and that Israel needed to continue to occupy, invade, attack and assassinate.

In Congress, McCain managed to become associated with AIPAC’s agenda more than his colleagues.  He always argued for more support for Israel. And when Israel and the U.S. both accepted negotiations with Yasser Arafat, he remained skeptical, raising doubts about the intentions of the Palestinians.

After his election to Congress, McCain quickly set himself up as an expert on defense and foreign policy. His first foreign policy posture in Congress was in 1983, when he opposed U.S. intervention in Lebanon, but not on humanitarian grounds. Instead he basically argued that far more force was needed against Syria and its allies in Lebanon. This became a pattern for the Vietnam veteran: that more force is always needed wherever U.S. troops are deployed. Some attribute the “surge” to him, as if the surge really salvaged American fortunes in Iraq.

In an article written during his 2008 presidential campaign, The New York Times talked about the McCain Doctrine and referred to his reaction to Sep. 11, when he argued for war on Syria, Iran, and Afghanistan.  For McCain, war was the only recourse for dealing with foes of the U.S. and Israel. And war was not effective for McCain without massive force and heavy troop deployments.

The Senator and the Ikhwan 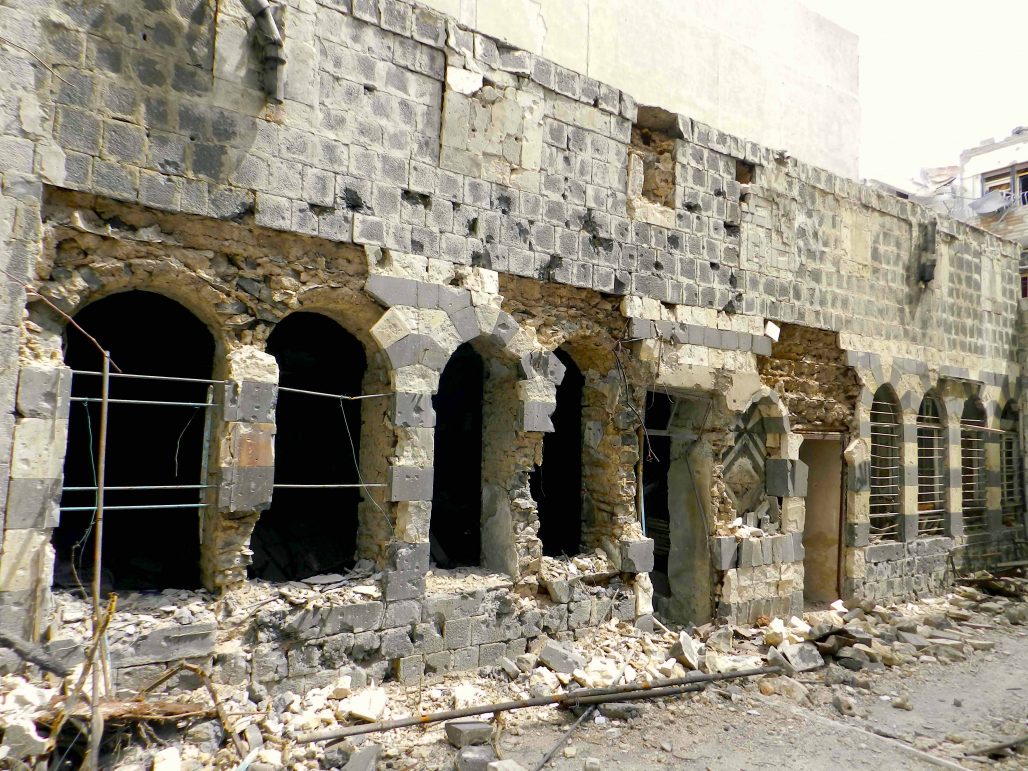 McCain was a champion of the Muslim Brotherhood (Jam’iyat al-Ikhwan al-Muslimin), even if that put him at odds with Gulf rulers who he also supported.  This position may seem uncharacteristic given his longstanding fealty to AIPAC and its agenda, and his general unfriendliness to Arabs and Muslims. But McCain may have undertaken this role at the behest of AIPAC.

In the aftermath of the Arab uprisings, McCain negotiated with leaders of the Muslim Brotherhood in Syria, Tunisia, Libya, and Egypt.  It was after a series of visits from leaders of those movements to Washington that they basically reversed their traditional position on Israel.  Leaders of An-Nahda rescinded their plan to criminalize normalization with Israel, while leaders of the Egyptian Muslim Brotherhood pledged commitment to the Egyptian-Israeli peace treaty.  Similarly, the stance of the Syrian Muslim Brotherhood abandoned any hostility toward Israel and even toward its occupation of the Golan heights.  McCain’s confidence in the ability of the Ikhwan to deliver the interests of Israel and U.S., led him to oppose Sisi’s coup as he trusted that Mohammed Morsi would be able to guard U.S. interests and the interests of the Egyptian-Israeli military-intelligence alliance.

McCain became, in this manner, an unabashed champion of what is called in the West (and in the Gulf regimes’ media) the “Syrian revolution”.  He also trusted the Islamists in the “revolution” and hoped that Israeli interests would be served by a change of regime that would be aligned with the U.S. and Israel.  The risk of promoting Jihadi Islamist rebels was, for McCain and the Israeli lobby, worth the effort.  For that, McCain’s death was mourned by leaders of the “liberal” exile opposition and by Jihadis of the Syrian rebels, including Huthaifah `Azzam, the son of `Abdullah `Azzam (the mentor of Usamah bin Laden). (Huthaifah `Azzam later deleted his post after I drew attention to it).

The career of McCain intersected with the rise of AIPAC on Capitol Hill.  He also benefited from the Reagan and Bush Doctrines, both of which relied on the use of massive force against the enemies of U.S. and Israel.

The assessment of McCain can’t hope to achieve a measure of balance given the adulation by mainstream media for a man whose political sins were always instantly forgotten.  His reference to Vietnamese by a pejorative term was seen as an example of his frank talk—not of his prejudice. His involvement with Charles Keating was seen as an example of a minor error and not of the corruption of an influential senator.  His endorsement of war, the Israeli occupation, and his embrace of tyrants (especially in the Gulf and North Africa) have not been perceived as inconsistent with the media’s image of a champion of human rights.

In the end, John McCain was a major face of American empire, just as were two people who attended his funeral–Obama and Bush –and one who did not, Trump.

46 comments for “John McCain: The View from the Middle East”