While visiting Galileo’s house in Florence, Jean Ranc reflected on how America thinks the world revolves around it, as it was once falsely thought the sun revolves around the earth.

On a sunny day last January, my visit to Florence took me deep into the Tuscan hills where a conference titled, “The America of Trump, the Russia of Putin. And Europe?” had taken place, sponsored by the Fondazione Spadolini and the European University Institute. I visited the Fondazione to learn more about the conference, but on my return to Florence down the mountain, it was the Villa Galileo just across the road from a small trattoria where I had stopped, that truly intrigued me.

My on-line search that evening revealed that indeed, it had been the last home of Galileo after his trial as a “heretic.” To save himself from torture and execution, he denied his heliocentric vision and lived under villa arrest from 1631 until he died in 1642. I had stumbled upon the very site of one of the Inquisition’s most infamous persecutions.

A grim reminder of a 21st Century Inquisition we’re living through. 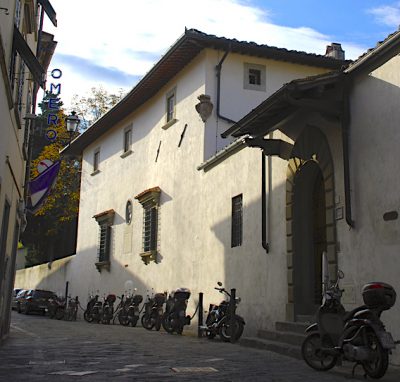 The villa where Galileo spent his remaining years under arrest. (Wikimedia Commons)

I thought of present-day truth-tellers being hounded by contemporary inquisitors just as Galileo had been persecuted. Tellers of truth such as Edward Snowden, who revealed the extent of illegal mass surveillance; Chelsea Manning, imprisoned seven years for revealing U.S. brutality in Iraq and Afghanistan; Julian Assange locked up in London’s Ecuadorian Embassy as an exile since August 2012 for publishing leaked U.S. secrets in Wikileaks; and Katharine Gun, a British whistleblower who faced two years in prison before her case was dropped for exposing the NSA’s spying on U.N. Security Council nations before a vote to consider authorizing the 2003 invasion of Iraq.

It was around 1898, when America first starting thinking it was the center of the universe. In that year the U.S. intervened in Cuba’s war for independence and proceeded to take over parts of the decrepit Spanish Empire, from Latin America to the Philippines. Shortly before, in 1893, the U.S. overthrew the Queen of Hawaii on behalf of U.S.-backed sugar and pineapple plantation owners.

That led to a long history of political interference in other countries, in the form of destabilization, coups and invasions. Once the Soviet Union dissolved in 1991, a narrative was fostered to justify expanding NATO to Russia’s borders.

In the last four years, anti-Russian propaganda has reached a fever pitch: lies about Russia’s “expansionism” in Ukraine; hype about Russia’s “meddling” in the U.S. elections, creating an existential “threat to democracy;” unproven allegations of Russia using chemical weapons to poison the Skripals in London. Experts are trotted out on major media to further the narrative without hard evidence. Together with think-tanks, the American and British media run these stories daily with almost no counter news or opinions. Through endless repetition, allegations are transformed into “facts.” Sanctions are loaded upon sanctions, based on these unsubstantiated charges in an economic war against Russia.

In 2004, journalist Ron Suskind wrote in The New York Times magazine that a top White House strategist for President George W. Bush—identified later as Karl Rove, Bush’s Deputy White House Chief of Staff—told him, “We’re an empire now; we create our own reality.”

Swiss journalist, Guy Mettan, in his 2017 book, Creating Russophobia: From the Great Religious Schism to Anti-Putin Hysteria, writes that the West’s psycho-social pathology about Russia dates back over 1,000 years to the division of Christendom between the Orthodox and Roman churches. The U.S. is a relative newcomer to this, but seeks perhaps its biggest role.

The astute University of Chicago Professor John J. Mearsheimer exposed how the West provoked the Ukraine crisis in his 2014 Foreign Affairs article, “Why the Ukraine Crisis is the West’s Fault: The Liberal Delusions That Provoked Putin.” But the American foreign policy establishment and media remain committed to the suppression of facts about the U.S.-backed coup in Kiev and the resulting escalating tensions with Russia.

Ignoring or fabricating evidence, the U.S. and NATO persist in lying that Russia has expansionist goals in Ukraine, Crimea and Syria. Russia is helping ethnic Russians in the east of Ukraine who are resisting the coup, Crimea (which had been part of Russia since 1783 and transferred by the Soviets to Ukraine in 1954) held a referendum in 2014 in which the public voted to rejoin Russia. The Syrian government invited Russia in to help fight Western and Gulf-backed jihadists trying to violently overthrow the government, as even then Secretary of State John Kerry admitted.

Another scholar, Richard Sakwa, Professor of Russian and European Politics at the University of Kent, writes in his latest book, Russia Against the Rest: The Post-Cold War Crisis of World Order, that the Ukraine crisis crystallized the profound differences between Russia and the West, differences that are not just a replay of the “Cold War.”

Simply put, under the banner of the indispensable “liberal world order,” neo-conservative warriors and “democracy”-spreading-“humanitarian-interventionists” are promoting the Russophobia “reality” to justify American hegemony. 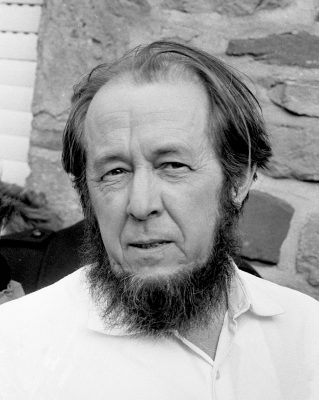 Solzhenitsyn: Ditched when he turned on America. (Wikimedia Commons)

One of the greatest illustrations of the centuries-old Russophobia, says Mettan in his 2017 book, is the case of Russian dissident Alexander Solzhenitsyn.

“During the 1990s, I was shocked by the way the West treated Solzhenitsyn,” Mettan wrote. “For decades, we had published, celebrated, and acclaimed the great writer as bearing the torch of anti-Soviet dissidence,” but only when he criticized his communist Russia. But after moving to the U.S., when Solzhenitsyn showed a preference for privacy “rather than attending anticommunist conferences, western media and academics began to distance themselves.”

And when Solzhenitsyn returned to Russia and spoke out against Russian ‘westernizers’ and liberals who denied Russian interests, he was labeled “an outdated, senile writer,” though he had not changed his fundamental views on freedom.

After the mid-July, Trump-Putin Helsinki summit, there were countless mass media delusions and hysteria against U.S.-Russia ties, reminiscent of the Hearst newspaper empire’s propaganda that whipped up a frenzy to support the empire-building war against Spain in 1898. Professor Stephen Kinzer vividly described the unsuccessful battle by prestigious anti-imperialists against the power of the Hearst propaganda in his latest book, The True Flag: Theodore Roosevelt, Mark Twain, and the Birth of American Empire.”

Today’s propaganda tool is named “RussiaGate,” a campaign to bring down a deeply flawed U.S. president for possibly trying to mend U.S. relations with Russia.

Do we have enough good sense left to follow the advice of Henry David Thoreau: “Let us settle ourselves, and work and wedge our feet downward through the mud and slush of opinion, and prejudice … till we come to a hard bottom and rocks in place, which we can call reality.”

Or, as I thought when I visited Galileo’s house that day in the Florentine hills: the world does not revolve around America.

Jean Ranc is a retired psychologist/research associate at the University of North Carolina, Chapel Hill.

41 comments for “The Sun Does Not Revolve Around the US”