Former U.N. chief Kofi Annan died on Saturday. The following is a look back on his tumultuous ten years in office by Consortium News Editor-in-Chief Joe Lauria, writing for The Boston Globe on Dec. 29, 2006.

UNITED NATIONS — Kofi Annan, the first United Nations secretary general from sub-Saharan Africa, ends his 10-year term on Sunday, leaving behind a complex legacy during an era of genocide, terrorism, and US dominance.

The 2001 Nobel Peace Prize recipient charted a treacherous course between pleasing and antagonizing Washington while resisting persistent calls for his resignation over the worst corruption scandal in UN history.

Annan was a secretary general of many contradictions: the first UN staff member to rise to the top, he was later reviled by much of the staff. A champion of developing world causes against entrenched First World power, he was lambasted as a toady of the West. And while critics say his inactions contributed to genocide in Bosnia and Rwanda, he later became a leading advocate for military intervention to curb mass killings.

His career as the world’s top diplomat has evoked strong views from both supporters and detractors.

“It has been a decade of unmitigated failure,” said Nile Gardiner, a fellow at the conservative Heritage Foundation. “He is probably the worst UN secretary general in history.”

“He will rank historically with Dag Hammarskjöld as one of the two most important secretaries general in the evolution of the organization,” said William Luers, president of the UN Association of the USA. 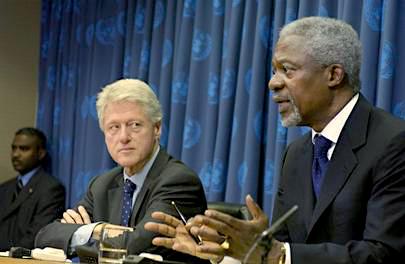 Ed Luck, a UN specialist at Columbia University, thinks Annan was too focused on Washington for his own and the United Nations’s good. “The UN should stop obsessing about the US. It is not going to give up on the UN,” he said. “It seems much of the time he was trying to cater to Washington, bend over backwards if some senator complains.”

“By doing so,” Luck said, “he lost credibility with many of the other member states, feeding into this sense that the US is trying to dominate everything and the secretary general is just a puppet.”

A resentful Annan in turn criticized Washington, Luck said. Just before the 2004 US presidential election, Annan angered the Bush administration by branding the invasion of Iraq as “illegal.”

In his farewell address at the Truman Library in Independence, Mo., on Dec. 11, Annan aroused anger in America by saying, “No nation can make itself secure by seeking supremacy over all others.” He added that world institutions could not accomplish much “when the US remains aloof.”

Washington defenders were incensed. Gardiner blasted Annan as “a very antagonistic secretary general who has gone out of his way to be very unhelpful.”

But Luers said: “His problem has been principally the US attitude of perceiving the UN as a threat to US power, as a counter to the US approach to the world. It was a US, not Kofi, problem.”

When Annan and his son Kojo got caught up in the Iraq oil-for-food scandal two years ago, UN officials saw the Washington attacks as purely partisan payback for Annan’s opposition to the Iraq war.

“When there were rumors of his son’s involvement, instead of ordering a serious investigation he simply dismissed it as part of a political agenda against the UN,” Luck said. “Most people in the Secretariat to this day view oil – for – food that way.”

Annan met three times with the president of Cotecna, a Swiss firm that employed Kojo and was bidding for a UN contract. Cotecna wanted to inspect shipments to Iraq in the oil-for-food program, designed to help ordinary Iraqis overcome sanctions imposed after Iraq’s 1990 invasion of Kuwait.

At first Annan denied to investigators ever meeting with the Cotecna president. When presented with evidence of the meetings, he said they had nothing to do with his son or the contract. Three months after the final meeting Cotenca got the $10 million deal.

Some Annan supporters concede that there was at least an appearance of conflict of interest.

Annan defenders such as Dumisani Kumalo, South Africa’s UN ambassador, blame the Security Council. “They created the program, they ran the program,” he said. “It failed and they blamed Kofi Annan. The oil – for – food program is an unfair blemish on him.”

Annan said at his final press conference: “The scandal, if any, was in the capitals and with the 2,200 companies that made a deal with Saddam behind our backs.” 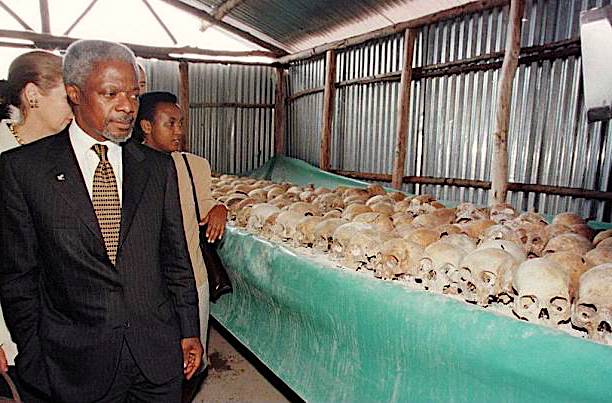 Annan in Rwanda, 1998, where he faced hecklers for failing to act. (ALEXANDER JOE/AFP/Getty Images)

With the scandal behind him, Annan enters retirement, part of which he will spend in his native Ghana, where he born in 1938 in Kumasi. He received an economics degree from Macalester College in St. Paul and a master’s in management as a Sloan Fellow at the Massachusetts Institute of Technology.

Annan joined the United Nations as a budget officer in Geneva in 1962 and eventually would be head of budget, personnel director, and undersecretary general for peacekeeping.

In that last post, he received a cable on Jan. 11, 1994, from the UN force commander in Rwanda asking for reinforcements to prevent an impending genocide in which 800,000 mostly Tutsis would be massacred.

A later UN investigation found that Annan failed to act urgently on the request. A similar thing occurred at Srebrenica, where a UN inquiry found that he did too little to help stop the massacre of 8,000 Bosnians in July 1995.

After a Human Rights Day speech this month, Annan told the Globe that Security Council powers knew more and earlier about what was to happen in Rwanda.

“Let’s assume they didn’t know,” he said. “But what did they do when they found out? They sent planes to repatriate their nationals and allowed the killing to go on.”

Annan’s harshest critics, like Gardiner, say Rwanda and Srebrenica were his “darkest hours.”

“The award of the Nobel Peace Prize to Kofi Annan was an absolute travesty,” Gardiner said. “He could have done more to save lives and he chose not to.”

In his defense, Annan said at his final press conference that he was made the scapegoat for all the world’s problems.

32 comments for “A Retrospective on Kofi Annan, Dead at 80”