Why did NATO attack Yugoslavia in 1999, killing perhaps as many as 2,500 civilians? Here are some possible answers as Vladimir Golstein reflects back on that ugly episode.

By Vladimir Golstein
in Belgrade
Special to Consortium News

Right across the street from my hotel, tucked behind tall office buildings, is the rather large Church of St. Mark. Hidden in St. Mark’s shadows is a tiny Russian Orthodox church. The Church of the Holy Trinity, known simply as the Russian Church, is famous for holding the remains of Baron Pyotr Nikolayevich Wrangel, the Russian Civil War leader of the Whites. It is hard to find, but luckily, a friend took me there. 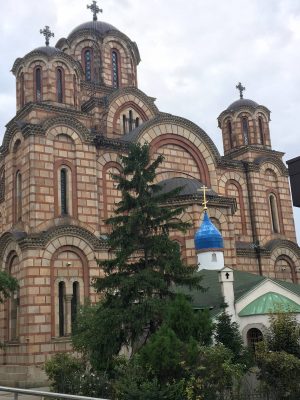 As we were looking around the church, not particularly interested in Wrangel, a couple of Russians asked me to take their picture in front of his tomb. Trying to find a proper angle for the picture, I noticed a small plaque on a wall nearby. It listed the names of Russians who died fighting for Yugoslav Serbs during the conflict with separatist Albanians in Kosovo and the subsequent NATO bombing of Yugoslavia in 1999.

As we left the church, we took a small path toward the top of the park. There we observed another brutal sign of that war: a destroyed building next to the TV center. It too had a plaque. It screamed, “Zashto” (For What? Why?). Below it were the names of all the TV people NATO killed during that attack. In all, as many as 2,500 civilians may have been killed by NATO, according to the then Yugoslav government, though the real number may never be known.

On the one hand, the question Zashto is both idle and provocative. It implies a laceration of wounds, a refusal to forget and to start anew. On the other, there is an obvious need to find an answer to this question simply to prevent future destruction and senseless murders.

We won’t find answers to this question in the official narratives, which tell us that the noble Clinton administration decided to stop flagrant violations of human rights in the extremely complex situation in the Yugoslav province of Kosovo by bombing the Serbs into respecting minorities both on its own and on neighboring territories. (In fact the large exodus of Kosovo Albanians to Albania proper only began after NATO bombs started to fall.) 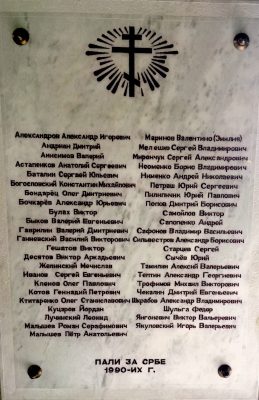 Russians who died fighting for Yugoslavia. (Photo by Vladimir Golstein)

Behind these official stories, a much sadder picture emerges. Why did these people die? Why did this NATO operation go ahead without UN Security Council authorization nor proof of self-defense, requirements of the UN Charter? Was it to satisfy the lust for power of U.S. and NATO leaders, of liberal interventionists like Madeleine Albright, Bill Clinton, and Susan Rice? To assuage the Clinton administration’s guilt over its failure to respond to the 1994 genocide in Rwanda? Was it to set up America’s largest military base in Europe since the Vietnam War, Camp Bondsteel in Kosovo? For American access to Kosovo’s vast mineral wealth and other business opportunities, including for Ms. Albright? Or was it to finally kill off a rather successful Yugoslav experiment in the “third way” between the West and the Soviet Union?

It seems these people had to die for all those reasons and to put into practice the doctrines of responsibility to protect (R2P) and full spectrum dominance, doctrines cooked up by liberal interventionists and neocons in Washington. Those who died were essentially guinea pigs of a New World Order experiment to see how far the world could be pushed to implement R2P, a policy that could be used to mask imperial ambitions.

And it worked. Yugoslavia was unable to stand up to the power of NATO operating outside the mandate of its obsolete charter: namely to defend Western Europe against an alleged Soviet threat. Indeed one could argue that with the Cold War over, another motive for the attack on Yugoslavia was to provide NATO with a justification to exist. (It would later go even further afield outside its legal theater of operation, into Afghanistan and then Libya.)

Russia could do little to help the Serbs. Then the Chinese Embassy was hit as well, as a test it seems, though The New York Times said it was a mistake. The Chinese did nothing.

Thus was R2P implemented—with no protection for Yugoslav Serbs. They had to die in the experiment to explore the limits of U.S. power and the limits of its resistance.

Vladimir Golstein, a former associate professor at Yale University, manages the Department of Slavic Studies at Brown University and is a commentator on Russian affairs.

← VIPS to Trump:  Intel on Iran Could be CATASTROPHIC
The Mystery Fixer Who is Negotiating an End to the Syrian War →

69 comments for “Hidden in Plain View in Belgrade”