Hammering on Russia is a losing strategy for progressives as most Americans care about economic issues and it is the Republicans and corporate Democrats who stand to gain, argues Norman Solomon.

Progressives should figure it out. Amplifying the anti-Russia din helps to drown out the left’s core messages for economic fairness, equal rights, environmental protection, diplomacy and so much more. Echoing the racket of blaming Russia for the USA’s severe shortages of democracy plays into the hands of Republicans and corporate Democrats eager to block progressive momentum.

When riding on the “Russiagate” bandwagon, progressives unwittingly aid political forces that are eager to sideline progressive messages. And with the midterm elections now scarcely 100 days away, the torrents of hyperbolic and hypocritical claims about Russia keep diverting attention from why it’s so important to defeat Republicans.

As a practical matter, devoting massive amounts of time and resources to focusing on Russia has reduced capacities to effectively challenge the domestic forces that are assaulting democratic possibilities at home — with such tactics as state voter ID laws, purging of voter rolls, and numerous barriers to suppress turnout by people of color.

Instead of keeping eyes on the prize, some of the Democratic base has been watching and trusting media outlets like MSNBC. An extreme Russia obsession at the network has left precious little airtime to expose and challenge the vast quantity of terrible domestic-policy measures being advanced by the Trump administration every day.

Likewise with the U.S. government’s militarism. While some Democrats and Republicans in Congress have put forward legislation to end the active U.S. role in Saudi Arabia’s mass-murderous war on Yemen, those efforts face a steeper uphill climb because of MSNBC.

This week, under the headline “It’s Been Over a Year Since MSNBC Has Mentioned U.S. War in Yemen,” journalist Adam Johnson reported for the media watchdog group FAIR about the collapse of journalistic decency at MSNBC, under the weight of the network’s Russia Russia Russia obsession. Johnson’s article asks a big-type question: “Why is the No. 1 outlet of alleged anti-Trump #resistance completely ignoring his most devastating war?” 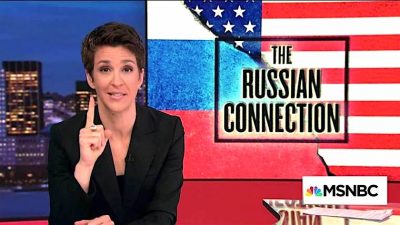 Maddow: Most Americans don’t care for her obsession.

The FAIR report says: “What seems most likely is MSNBC has found that attacking Russia from the right on matters of foreign policy is the most elegant way to preserve its ‘progressive’ image while still serving traditional centers of power — namely, the Democratic Party establishment, corporate sponsors, and their own revolving door of ex-spook and military contractor-funded talking heads.”

Corporate media have been exerting enormous pressure on Democratic officeholders and candidates to follow a thin blue party line on Russia. Yet polling shows that few Americans see Russia as a threat to their well-being; they’re far more concerned about such matters as healthcare, education, housing and overall economic security.

The gap between most Americans and media elites is clear in a nationwide poll taken after the Trump-Putin summit in Helsinki, which was fiercely condemned by the punditocracy. As The Hill newspaper reported this week under the headline “Most Americans Back Trump’s Call for Follow-Up Summit With Putin,” 54 percent of respondents favored plans for a second summit. “The survey also found that 61 percent of Americans say better relations with Russia are in the best interest of the United States.”

Yet most Democratic Party leaders have very different priorities. After investing so much political capital in portraying Putin’s government as an implacable enemy of the United States, top Democrats on Capitol Hill are hardly inclined to help thaw relations between the world’s two nuclear superpowers.

National polling underscores just how out of whack and out of touch the party’s top dogs are. Last month, the Gallup organization asked: “What do you think is the most important problem facing the country today?” The results were telling. “Situation with Russia” came in at below one-half of 1 percent.

The day after the Helsinki summit, The Washington Post reported: “Citing polls and focus groups that have put Trump and Russia far down the list of voter priorities, Democratic strategists have counseled candidates and party leaders for months to discuss ‘kitchen table’ issues. Now, after a remarkable 46-minute news conference on foreign soil where Trump stood side by side with a former KGB agent to praise his ‘strong’ denials of election interference and criticize the FBI, those strategists believe the ground may have shifted.”

Prominent corporate Democrats who want to beat back the current progressive groundswell inside their party are leading the charge. Jim Kessler, a senior vice president at the “centrist” Third Way organization, was quick to proclaim after the summit: “It got simple real fast. I’ve talked to a lot of Democrats that are running in purple and red states and districts who have said that Russia rarely comes up back home, and I think that has now changed.”

The Democratic National Committee and other official arms of the party keep sending out Russia-bashing emails to millions of people on a nearly daily basis. At times the goals seem to involve generating and exploiting manic panic.

At the end of last week, as soon as the White House announced plans (later postponed) for Vladimir Putin to meet with President Trump in Washington this fall, the Democratic Congressional Campaign Committee fired off a mass email — from “RUSSIA ALERT (via DCCC)” — declaring that the Russian president “must NOT be allowed to set foot in our country.” The email strained to conflate a summit with Russian interference in U.S. elections. “We cannot overstate how dangerous this is,” the DCCC gravely warned. And: “We need to stop him at all costs.”

For Democrats who move in elite circles, running against Putin might seem like a smart election move. But for voters worried about economic insecurity and many other social ills, a political party obsessed with Russia is likely to seem aloof and irrelevant to their lives.

Norman Solomon is the national coordinator of the online activist group RootsAction.org and the executive director of the Institute for Public Accuracy. He is the author of a dozen books including “War Made Easy: How Presidents and Pundits Keep Spinning Us to Death.”

← The Gray Lady Thinks Twice About Assange’s Prosecution
Letter from Britain—Lost in a Brexit Maze: a Baffled Political Class Dreads the Prospect of Jeremy Corbyn →