Amidst the backdrop of increased U.S.-Russian tensions and even talk of war, long forgotten is the time the U.S. actually invaded, explains Jeff Klein.

Amid the bi-partisan mania over the Trump-Putin Summit in Helsinki, fevered, anti-Russian rhetoric in the United States makes conceivable what until recently seemed inconcievable: that dangerous tensions between Russia and the U.S. could lead to military conflict. It has happened before.

In September 1959, during a brief thaw in the Cold War, Nikita Khrushchev made his famous visit to the United States. In Los Angeles, the Soviet leader was invited to a luncheon at Twentieth Century-Fox Studios in Hollywood and during a long and rambling exchange he had this to say:

“Your armed intervention in Russia was the most unpleasant thing that ever occurred in the relations between our two countries, for we had never waged war against America until then; our troops have never set foot on American soil, while your troops have set foot on Soviet soil.”

These remarks by Khrushchev were little noted in the U.S. press at the time – especially compared to his widely-reported complaint about not being allowed to visit Disneyland.  But even if Americans read about Khrushchev’s comments it is likely that few of them would have had any idea what the Soviet Premier was talking about.

But Soviet – and now Russian — memory is much more persistent.  The wounds of foreign invasions, from Napoleon to the Nazis, were still fresh in Russian public consciousness in 1959 — and even in Russia today — in a way most Americans could not imagine.  Among other things, that is why the Russians reacted with so much outrage to the expansion of NATO to its borders in the 1990’s, despite U.S. promises not to do so during the negotiations for the unification of Germany.

The U.S. invasion Khrushchev referred to took place a century ago, after the October Revolution and during the civil war that followed between Bolshevik and anti-Bolshevik forces, the Red Army against White Russians.  While the Germans and Austrians were occupying parts of Western and Southern Russia, the Allies launched their own armed interventions in the Russian North and the Far East in 1918.

The Allied nations, including Britain, France, Italy, Japan and the U.S., cited various justifications for sending their troops into Russia: to “rescue” the Czech Legion that had been recruited to fight against the Central Powers; to protect allied military stores and keep them out of the hands of the Germans; to preserve communications via the Trans-Siberian Railway; and possibly to re-open an Eastern Front in the war.  But the real goal – rarely admitted publicly at first—was to reverse the events of October and install a more “acceptable” Russian government. As Winston Churchill later put it, the aim was to “strangle the Bolshevik infant in its cradle.”

In addition to Siberia, the U.S. joined British and French troops to invade at Archangel, in the north of Russia, on September 4, 1918. 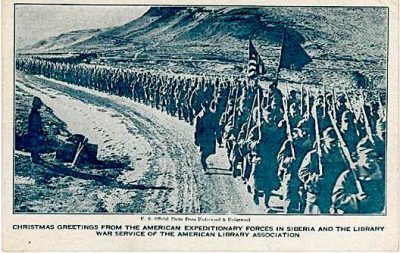 In July 1918, U.S. President Woodrow Wilson had personally typed the “Aide Memoire” on American military action in Russia that was hand-delivered by the Secretary of War at the beginning of August to General William Graves, the designated commander of the U.S. troops en route to Siberia. Wilson’s document was curiously ambivalent and contradictory. It began by asserting that foreign interference in Russia’s internal affairs was “impermissible,” and eventually concluded that the dispatch of U.S. troops to Siberia was not to be considered a “military intervention.”

But the American intervention began when U.S. soldiers disembarked at Vladivostok on August 16, 1918.  These were the 27th and 31st infantry regiments, regular army units that had been involved in pacification of U.S.-occupied Philippines.  Eventually there were to be about 8,000 U.S. troops in Siberia.

Judging from his memoires, General Graves was puzzled by how different things looked on the ground in Siberia than his vague instructions seemed to suggest.  For one thing, the Czechs hardly needed rescuing.  By the Summer of 1918 they had easily taken control of Vladivostok and a thousand miles of the Trans-Siberian Railway.

For the next year and a half, General Graves, by all appearances an honest and non-political professional soldier, struggled to understand and carry out his mandate in Siberia.  He seems to have driven the U.S. State Department and his fellow allied commanders to distraction by clinging stubbornly to a literal interpretation of Wilson’s Aide Memoire as mandating strict non-intervention in Russian affairs. The general seemed incapable of noticing the broad “wink” with which everyone else understood these instructions.

Graves strove to maintain “neutrality” among the various Russian factions battling for control of Siberia and to focus on his mission to guard the railroad and protect Allied military supplies.  But he was also indiscrete enough to report “White” atrocities as well as “Red” ones, to express his distaste for the various Japanese-supported warlords in Eastern Siberia and, later, to have a skeptical (and correct) assessment of the low popular support, incompetence and poor prospects of the anti-Bolshevik forces.

For his troubles, it was hinted, absurdly, that the General may have been a Bolshevik sympathizer, a charge that in part motivated the publication of his memoirs.

In the face of hectoring by State Department officials and other Allied commanders to be more active in support of the “right” people in Russia, Graves repeatedly inquired of his superiors in Washington whether his original instructions of political non-intervention were to be modified. No one, of course, was willing to put any different policy in writing and the general struggled to maintain his “neutrality.”

By the Spring and Summer of 1919, however, the U.S. had joined the other Allies in providing overt military support to “Supreme Leader,” Admiral Alexander Kolchak’s White regime, based in the Western Siberian city of Omsk.  At first this was carried out discretely through the Red Cross, but later it took the form of direct shipments of military supplies, including boxcars of rifles whose safe delivery Graves was directed to oversee.

But the prospects for a victory by Kolchak soon faded and the Whites in Siberia revealed themselves to be a lost cause.  The decision to remove the US troops was made late in 1919 and General Graves, with the last of his staff, departed from Vladivostok on 1 April 1920.

In all, 174 American soldiers were killed during the invasion of Russia. (The Soviet Union was formed on Dec. 28, 1922.)

Interestingly, pressure to withdraw the U.S. troops from Siberia came from fed-up soldiers and home-front opinion opposing the continued deployment of military units abroad long after the conclusion of the war in Europe. It is notable that during a Congressional debate on the Russian intervention one Senator read excerpts from the letters of American soldiers to support the case for bringing them home.

Then, as in later U.S. foreign interventions, the soldiers had a low opinion of the people they were supposed to be liberating.  One of them wrote home on July 28, 1919 from his base in Verkhne-Udinsk, now Ulan Ude, on the southern shore of Lake Baikal: 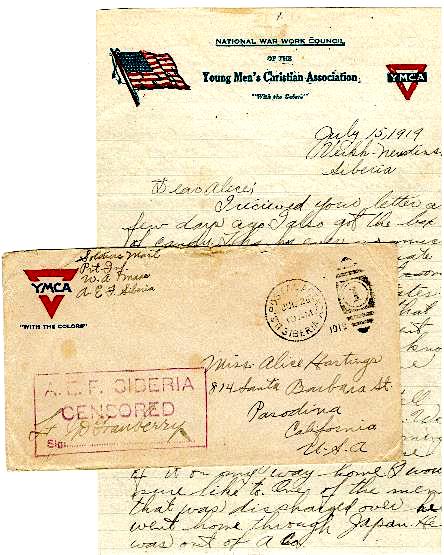 Letter home for U.S. soldier during invasion of Russia

“Life in Siberia may sound exciting but it isn’t.  It’s all right for a few months but I’m ready to go home now. . .  You want to know how I like the people?  Well I’ll tell you, one couldn’t hardly call them people but they are some kind of animal.  They are the most ignorant things I ever saw.  Oh, I can get a word of their lingo if they aren’t sore when they talk.  They sure do rattle off their lingo when they get  sore. These people have only one ambition and that is to drink more vodka than the next person.”

Outside of the State Department and some elite opinion, U.S. intervention had never been very popular.  By now it was widely understood, as one historian noted, that there may have been “many reasons why the doughboys came to Russia, but there was only one reason why they stayed: to intervene in a civil war to see who would govern the country.”

After 1920, the memory of “America’s Siberian Adventure,” as General Graves termed it, soon faded into obscurity.  The American public is notorious for its historic amnesia, even as similar military adventures were repeated again and again over the years since then.

It seems that we may need to be reminded every generation or so of the perils of foreign military intervention and the simple truth asserted by General Graves:

“. . .there isn’t a nation on earth that would not resent foreigners sending troops into their country, for the purpose of putting this or that faction in charge.  The result is not only an injury to the prestige of the foreigner intervening, but is a great handicap to the faction the foreigner is trying to assist.”

General Graves was writing about Siberia in 1918, but it could just as well have been Vietnam in the 1960s or Afghanistan and Syria now. Or a warning today about 30,000 NATO troops on Russia’s borders.

Jeff Klein is a retired local trade union president who writes frequently about international affairs and especially the Middle East.  The postcard and soldier’s letter are in his personal collection.

← Climb Down From the Summit of Hostile Propaganda
Inside WikiLeaks: Working with the Publisher that Changed the World →

96 comments for “When the US Invaded Russia”