Under the guise of deferring to the president on matters of national security, the 5-4 majority disregarded a litany of Trump’s anti-Muslim statements and held that the ban does not violate the First Amendment’s Establishment Clause, which forbids the government from preferring one religion over another. Neither the majority nor the dissenting opinions even mentioned the U.S.’s legal obligations under international human rights law.

Both of these treaties and customary international law prohibit the government from discriminating on the basis of religion or national origin. Trump’s Muslim ban does both.

Trump v. Hawaii “signals strongly that international law in general, and international human rights law in particular, no longer binds the United States in federal courts,” Aaron Fellmeth, professor at Sandra Day O’Connor College of Law, wrote me in an email. “Fortunately, it does not squarely hold that, but the effect may prove to be the same. For now, the Supreme Court appears determined to be complicit in U.S. human rights violations and cannot be relied upon as a check on the Executive Branch.”

The case that the Supreme Court ruled on involved the legality of Trump’s third travel ban. Issued by Trump in a “Proclamation” on September 24, 2017, the third iteration of the ban restricts travel by most citizens of Libya, Syria, Iran, Yemen, Chad, Somalia and North Korea. The ban forbids everyone from Syria and North Korea from obtaining visas. Nationals from the other six countries have to undergo additional security checks. Iranian students are exempted from the ban. The ban also forbids Venezuelan government officials and their families from traveling to the U.S.

More than 150 million people, roughly 95 percent of them Muslim, are affected by the ban. 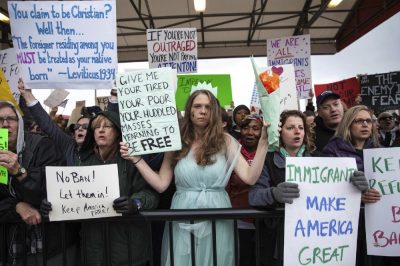 Protestors at airports against Muslim ban in 2017.

Two prior iterations of the ban restricted travel of citizens from only Muslim-majority countries. After federal courts struck them down, Trump appeared to cosmetically added Venezuela and North Korea to avoid charges of religious discrimination.

As Justice Sonya Sotomayor, joined by Ruth Bader Ginsburg, wrote in her dissent, “it is of no moment” that Trump included “minor restrictions” on North Korea and Venezuela – two non-Muslim-majority countries. Travel by North Korean nationals was already restricted and the ban only bars travel by Venezuelan officials and their families.

Ratification of a treaty not only makes the United States a party to that treaty, its provisions also become part of U.S. domestic law under the Supremacy Clause of the Constitution, which says treaties “shall be the supreme law of the land.”

Customary international law arises from the general and consistent practice of states. It is part of federal common law and must be enforced in U.S. courts, whether or not its provisions are enshrined in a ratified treaty. Courts have a duty to rein in federal executive action, which conflicts with a ratified treaty.

In Trump v. Hawaii, the high court concluded that the ban did not violate the Immigration and Nationality Act. The international law scholars argued in their amicus brief:

The Immigration and Nationality Act and other statutes must be read in harmony with these international legal obligations pursuant to the Supremacy Clause of the Constitution and long established principles of statutory construction requiring acts of Congress to be interpreted in a manner consistent with international law, whenever such a construction is reasonably possible.

But the Court did not construe the legality of the travel ban in light of U.S. treaty obligations and customary international law.

The the scholars argued that the primary thrust of the ban is to prohibit Muslims from entering the United States and thus constitutes religious discrimination. By singling out specific countries for exclusion, the ban also makes a prohibited distinction on the basis of national origin. 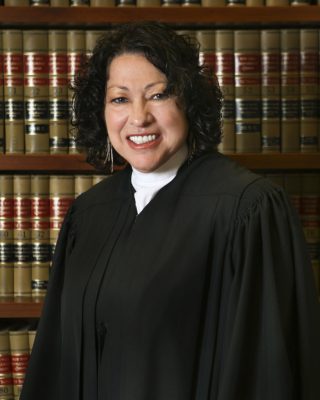 Sotomayor: Ban “masquerades behind a façade of national security.”

Although the Covenant does not generally “recognize a right of aliens to enter or reside in the territory of a State party …  in certain circumstances an alien may enjoy the protection of the Covenant even in relation to entry or residence, for example, when considerations of non-discrimination, prohibition of inhuman treatment and respect for family life arise,” the Human Rights Committee opined.

The Covenant also prohibits discrimination against the family: “The family is the natural and fundamental group of society and is entitled to protection by society and the State.” Immigrants and refugees who flee their countries of origin and come to the United States to reunify with their families are protected by the Covenant against discrimination based on religion or national origin. They need not be physically present in the United States to enjoy these protections.

The non-discrimination provisions of the Covenant on Civil and Political Rights also constitute customary international law. In 1948, the United States approved the Universal Declaration of Human Rights, which is part of customary international law. The declaration forbids discrimination based on religion or national origin, guarantees equal protection of the law, and shields family life against arbitrary interference.

States parties to the convention “shall not permit public authorities or public institutions, national or local, to promote or incite racial discrimination.” Parties are required to outlaw speech that stigmatizes or stereotypes non-citizens, immigrants, refugees and people seeking asylum.

The Discriminatory Nature of the Travel Ban 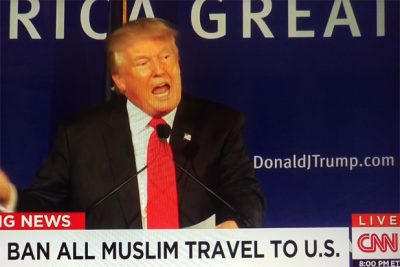 Even though the Supreme Court majority held that the ban did not violate the Establishment Clause of the First Amendment, much evidence exists to the contrary.

The Establishment Clause says, “Congress shall make no law respecting an establishment of religion, or prohibiting the free exercise thereof.” That means “one religious denomination cannot be officially preferred over another,” according to Supreme Court case law.

After quoting a few of Trump’s anti-Muslim statements, Chief Justice John Roberts noted, “the issue before us is not whether to denounce the statements” but rather “the significance of those statements in reviewing a Presidential directive,” that is “neutral on its face” because he text doesn’t specifically mention religion. Roberts said the Court was “addressing a matter within the core of executive responsibility,” adding, “We must consider not only the statements of a particular President, but also the authority of the Presidency itself.”

Roberts wrote that the Court could consider the president’s statements “but will uphold the policy so long as it can reasonably be understood to result from a justification independent of unconstitutional grounds.” Courts must give great deference to the president in immigration matters and will uphold his policy if it has any legitimate purpose, Roberts argued. “The entry suspension has a legitimate grounding in national security concerns, quite apart from any religious hostility,” he said.

Sotomayor spent seven of the 28 pages of her dissent listing more than a dozen statements by Trump denigrating Muslims. She cited, in Trump’s words, the policy’s initial purpose as a “total and complete shutdown of Muslims entering the United States.” But that policy “now masquerades behind a façade of national security concerns,” Sotomayor wrote.

She quoted a Trump adviser who said, “When [Donald Trump] first announced it, he said, ‘Muslim ban.’” Sotomayor also listed Trump’s declarations that “Islam hates us,” “we’re having problems with Muslims coming into the country,” and “Muslims do not respect us at all.” 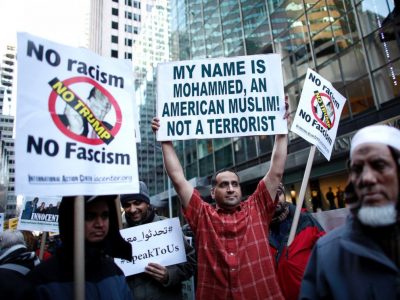 Trump said President Franklin D. Roosevelt “did the same thing” with his internment of Japanese Americans during World War II, Sotomayor noted. Trump told a story about General John J. Pershing killing a large group of Muslim insurgents in the Philippines with bullets dipped in pig’s blood. When he issued his first ban, Trump explained that Christians would be given preference for entry as refugees into the United States. He also retweeted three anti-Muslim videos.

“Taking all the relevant evidence together,” Sotomayor wrote, “a reasonable observer would conclude that the Proclamation was driven primarily by anti-Muslim animus, rather than by the Government’s asserted national security justifications.” The Proclamation, she added, “is nothing more than a ‘religious gerrymander.’”

There is hope that the most abhorrent effects of this case can be mitigated. Yale law professor Harold Hongju Koh wrote on Scotus blog that transnational actors — including nation-states, international organizations, non-governmental organizations, multinational enterprises and private individuals — will invariably file litigation in international fora based on international law to lessen the impact of the ruling in Trump v. Hawaii:

[A]s they have done against other Trump policies, other transnational actors will invoke what I have called “transnational legal process” to contest and limit the impact of the court’s ruling. As they did after losing the Haitian interdiction case at the Supreme Court 25 years ago, litigants will surely seek out international fora to make arguments against the travel ban based on international law.

The Constitution’s Take Care Clause requires the president to “take care that the laws be faithfully executed.” Trump has a constitutional duty to comply with U.S. legal obligations under both treaty and customary international law.

This article was reprinted with permission from TruthOut.

Marjorie Cohn is professor emerita at Thomas Jefferson School of Law, former president of the National Lawyers Guild, deputy secretary general of the International Association of Democratic Lawyers and an advisory board member of Veterans for Peace. An updated edition of her book, Drones and Targeted Killing: Legal, Moral, and Geopolitical Issues, was recently published. Visit her website: http://marjoriecohn.com.