Don North was part of an ABC News team on the route from St. Patrick’s in New York to Arlington Cemetery of the funeral procession of Robert Kennedy who was buried 50 years ago today on June 8, 1968. Here is the report Don read on the air.

Standing here at the base of the Grecian columns on the south side of the Lincoln Memorial there will be a very striking view of the funeral procession of Senator Robert Kennedy.

The first sight of the procession will be through the trees as it turns off Constitution Avenue onto Henry Bacon Drive…a short tree lined street. It will then be in full view as it turns into the circle around the Lincoln Memorial. It will pass directly below me between the monuments honouring two great Americans, Washington and Lincoln.

This is truly the scenic heart of this Capitol city. 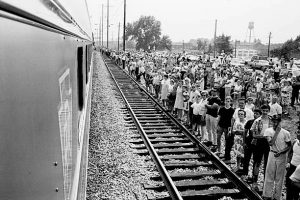 Along the funeral train of Robert F. Kennedy. (Getty)

To the right of the reflecting pool is “Resurrection City” with a slight haze from burning trash hanging over it. Through the trees lining the street I can see the ramshackle plywood huts and the puddles and mud inside the encampment. It’s a blot on this scenic landscape, but it’s the kind Robert Kennedy would approve, for these were the people he worked to lift from the ghettoes they represent from the cities, native peoples reservations and the backwoods of America.

Some 2,000 residents of Resurrection City are lining the street in front of their camp to pay their last respects to a man they considered their champion. A delegation of 25 members of the Poor Peoples March are now meeting their leader Rev. Ralph Abernathy at Union Station to join the funeral procession to the grave.

The funeral cortege is now passing the Lincoln Memorial heading onto the Memorial Bridge that spans the Potomac. As it passes through the great golden Horsemen at the entrance of the bridge, the late Senator’s journey to his grave is almost over.

The Custis-Lee Mansion can be seen directly ahead in Arlington Cemetery. A verdant slope of grass spreads out below the Mansion and from this distance, almost a mile away the grave of President John Kennedy is only a tiny square. Senator Kennedy passed this same location four and a half years ago walking behind the gun carriage carrying his slain brother.

Today there is no gun carriage or riderless horse and no muffled drum beats…but the sadness of that November day is here and the love and respect for a lost leader is also here this afternoon at the Lincoln Memorial.

It’s somehow ironic, but fitting to the memory of Senator Kennedy that this last group of people lining his route to the grave as he leaves the city are largely the poor people of Resurrection City…the very people whose cause he spoke out for so eloquently and whose problems he understood and fought for. From these people he goes to Arlington where his remains will lie beside American soldiers, many the dead of Vietnam, a war Senator Kennedy fought to end.

It brings to mind one of the most moving moments of this sad day when his brother, Senator Ted Kennedy, eulogizing his fallen brother in St. Patricks Cathedral 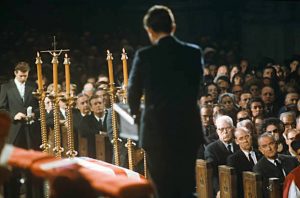 “He saw wrong and tried to right it.

“He saw suffering and tried to heal it.

“Saw war and tried to stop it.”

The hearse has now passed. Robert Kennedy has left Washington for the last time.

He should have died hereafter for he had much to do that may not now be done.

He was killed by hate in Los Angeles. Today, here in Washington he will be buried with love.

Here is an ABC News report from that day of the funeral and procession for Robert Kennedy, from St. Patrick’s Cathedral down the Pennsylvania Railroad tracks and through the streets of Washington to his final resting place in Arlington:

Photographs by Paul Fusco for Life Magazine of the crowds lining the railroad tracks.

Don North, a veteran war correspondent who covered the Vietnam War and many other conflicts around the world, is the author of Inappropriate Conduct,  the story of a WW II correspondent whose career was crushed by the intrigue he uncovered. 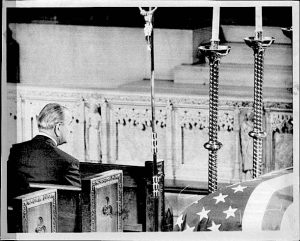 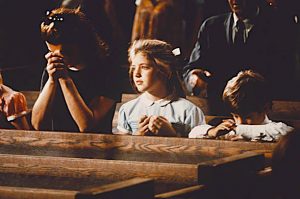 Jacqueline Kennedy with her children at RFK funeral. (Photo by Rolls Press/Popperfoto/Getty Images) 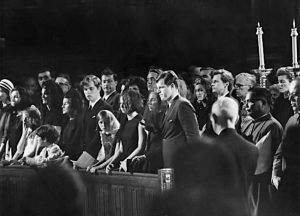 11 comments for “From the Ghettoes, Reservations and Backwoods of America”