The American abandonment of diplomacy in the Middle East has allowed its clients to pretty much do what they want leading to an ongoing realignment in the region, says Chas Freeman.

Time was, the countries of the Middle East relied on the United States for patronage, protection, and guidance.  Suez taught Israel, Britain, and France that without Washington’s acquiescence, their policies could not succeed.  Egypt’s defection showed Russia the limits of its ability to compete for clients in the region.  It was U.S. leadership that enabled Israel, Egypt, and Jordan to end the state of war between them.

The standing of the United States in the region derived in part from its centrality to diplomacy aimed at finding a formula for peaceful coexistence between Israelis and Palestinians and acceptance of Israel’s legitimacy by its Arab neighbors. Except on issues related to Israel, many Arab governments followed America wherever it led. The collapse of the Soviet Union erased Russian influence in the Middle East, as it did elsewhere.

To recall this history is to underscore the extent of the geopolitical changes that have occurred so far this century. The United States no longer enjoys primacy in the Middle East.  The former colonial powers need American military support to intervene in the region, but the countries of the region itself now act independently, confident that they can gain American backing for whatever they do. They do not seem to be wrong about this, judging from U.S. backing for Israel’s wars on its neighbors, Gulf Arab efforts to topple the Asad government in Syria, and the ongoing devastation of Yemen by Saudi Arabia and the U.A.E.

In this century, the U.S.-managed “peace process” between Israelis and Palestinians served as a distraction while Israel evicted Palestinians from their homes, annexed their lands, and denied them self-determination. The ever less credible “peace process” ended by severely damaging U.S. diplomatic standing in the region and beyond it. Unilateral U.S. recognition of an undivided Jerusalem as Israel’s capital capped what had come to be seen as the world’s longest–running diplomatic farce.

In the absence of strategy, a desire to sustain relationships in the region by supporting clients’ actions drives U.S. policy. The clients themselves have moved beyond relationship-driven diplomacy and are into transactionalism. The extent to which the U.S. now follows rather than leads its client states in the region is reflected in the Trump administration’s obeisance to Israeli and Saudi hostility to Iran and the Joint Comprehensive Plan of Action (JCPOA—Iran nuclear deal.)

Meanwhile, minimal commitments of force accompanied by deft diplomacy have enabled Russia to exploit the Syrian tragedy [having been invited into Syria by Damascus] to become the most sought-after external actor in the region’s affairs. Turkey, once outside the region and Russia’s NATO enemy, is again part of the Middle East, this time cooperating with Russia there more often than not.  Egypt, Iran, Israel, Saudi Arabia, and Turkey are all cultivating ties with Moscow.  Their objective is to correct over-reliance on the United States by diluting it.  The same purpose inspires their efforts to build markets in China and India and to enlist Chinese and Indian support for their foreign policies. 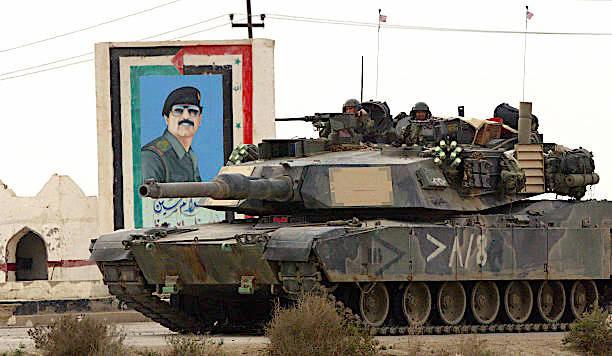 A tank from the U.S. Marine Task Force Tarawa sets up position in front of a painting of Saddam Hussein March 24, 2003 at the garrison of the Iraqi 23 Infantry brigade in the southern Iraqi city of Nasiriyah. (Photo by Joe Raedle/Getty Images)

The U.S. invasion of Iraq thrust that country into anarchy and religious warfare that embittered relations between Sunnis and Shiites throughout the region.  U.S. policies focused on regime change gave Iran political hegemony in Iraq, entrenched its influence in Syria, and consolidated its alliance with Lebanese Hezbollah.  The collapse of order in the Levant spawned vicious new  terrorist movements that spread from Iraq to Syria, Somalia, Egypt, Yemen, Libya, and the Sahel.

From the outset, Islamist forces in Syria enjoyed support from foreign enemies of the Asad government, including Islamists, the Syrian diaspora, most of the Gulf Arab states, Turkey, Israel, and the United States.  As proxy warfare escalated, an avalanche of refugees from Syria destabilized the EU. Six hundred thousand dead and 11 million displaced Syrians later, Asad remains in the saddle in Damascus.  He has defeated his armed opposition but is beholden to Iran, its Shiite allies in Lebanese Hezbollah, and Russia for this victory. Syria’s agonies are ending in a phony war between the United States and Turkey. Israel, which wanted anarchy or partition in Syria, now struggles to contain a hostile Iranian presence there and in neighboring Lebanon. Saudi Arabia and other Gulf Arab states that sought to overthrow Asad must now find a way to live with him.

Misguided American interventions and freelancing by U.S. client states have thus transformed the region’s politics, entrenched anti-Americanism with global reach, and facilitated its spread in Africa and Asia.  The wars that did this – the pacification campaigns in Afghanistan that followed the post-9/11 punitive raid of 2001, the destabilization of Iraq, the overthrow of the Libyan government, and incoherently contradictory policies that supported mutual antagonists in Syria – have yet to end or are ending in American defeat.  No longer the playground of imperial powers, the Middle East is now dominated by religious strife, Arab efforts to roll back US-abetted Persian hegemony, and cynical manipulation of Washington’s policy decisions by U.S. client states.

Four Trends in the Region

Let me conclude with four broad observations about overall trends in the Middle East. 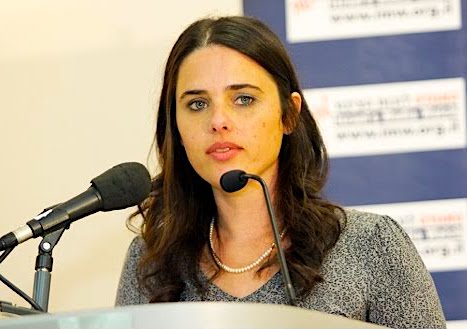 Israeli Justice Minister Ayelet Shaked: “They should go, as should the physical homes in which they raised the snakes. Otherwise, more little snakes will be raised there.”

First, religion is back as a driver of history.  Once a contest of nationalisms, the Israeli-Palestinian struggle is now part of the region’s multi-dimensional religious strife.  Both Sunni and Shiite extremists have made violent opposition to Zionism – as opposed to support for the Palestinian cause – a central feature of their ideologies.  This position enjoys broad support in the Muslim world.  Despite common interests with Israel, Arab pragmatists are constrained by Muslim loathing of Zionism in what they can do with it.  Meanwhile, the transformation of Judaism into a racist state ideology by Zionist extremists risks separating Israel from mainstream Jews abroad, who recoil from identification with the so-called “Jewish state’s” perversion of Jewish values and its increasingly amoral and inhumane behavior.  Ironically, however, as Hindutva tightens its hold on Indian politics, India’s Islamophobia is drawing it closer to Israel, which is becoming an increasingly important source of the country’s defense imports.

Second, the rising powers that Middle Eastern countries seek to engage in their affairs are unlikely to meet their expectations. China and India are the fastest growing markets for the Middle East’s energy exporters. But China has assiduously avoided entanglement in the region’s conflicts – whether Israel-Palestine or Gulf Arab-Iran. China is now the major foreign presence in Iraq’s oil sector, a significant investor in Egyptian and Iranian industry, a growing force in engineering management and construction in the Gulf, and a lucrative market for Israeli defense and internal security technology. Indian and Pakistani labor is a mainstay of Gulf Arab economies. But with the exception of an effort to loosen Pakistan’s hold on Afghanistan by investing in the Iranian port of Chabahar, India too is keeping its distance from Middle Eastern politics.

Third, with the exception of the United States, external powers have all declined to associate themselves with Israel’s, Saudi Arabia’s, and the United Arab Emirates’ hysteria about Iran. U.S. policy follows that of Israel in its focus on Iran’s potential to become a nuclear weapons state. Americans remain in denial about our role in expanding Iran’s political sway in the region, which is the principal concern of the Gulf Arabs. Washington’s confused approach to Qatar’s blockade by the Emirates and Saudi Arabia reflects this. The U.S. withdrawal from the JCPOA will not be followed by other great powers. It is more likely to isolate Israel and the United States than Iran.

Finally, there is a very real danger that the low intensity conflict now underway between Israel and Iran in Syria and the Gulf Arabs’ proxy wars with Iran could escalate into a major war. One scenario for such a war would be a Saudi-assisted Israeli assault on Iran calculated to drag in the United States or a direct attack on Iran by U.S. forces. This would likely trigger strikes on Israel by Iranian forces and their allies in Syria and Lebanon and efforts by Iran to sabotage Saudi and Emirati oil production. It is unclear how such a war would end. But, having delegated U.S. policy toward Iran to Israel and the Gulf Arabs, the United States is in no position to decide that question or very much else.

Remarks delivered to the Middle East Project by Ambassador Chas W. Freeman, Jr. in Washington, D.C. on May 10, 2018.

Ambassador Freeman chairs Projects International, Inc. He is a retired U.S. defense official, diplomat, and interpreter, the recipient of numerous high honors and awards, a popular public speaker, and the author of five books.

← 50th Anniversary of May 1968, Paris: Memories of an Illusory Revolution
Spooks Spooking Themselves →

18 comments for “A Middle East with No Master”