The 300 asylum seekers who arrived at the U.S. border on April 29 after a month-long, 2,000-mile journey have another grueling struggle ahead of them, according to the immigration attorneys who are donating their time to represent them.

More than three-quarters of asylum claims from Hondurans, Guatemalans and Salvadorans between 2012 and 2017 were denied, according to the Transactional Records Access Clearinghouse at Syracuse University, and this year’s caravan of asylum seekers are facing a climate made even more hostile by the xenophobic Trump administration.

Once the asylum applicants—who traveled in a caravan to the Tijuana-San Ysidro border from Honduras, El Salvador and Guatemala—establish that they face a credible fear of persecution in their home countries, their ordeals are just beginning.

Colleen Flynn, an immigration attorney with the National Lawyers Guild’s Los Angeles chapter, said in an interview that because of retaliation by the Trump administration, even those who establish “credible fear” could face years of detention.

“Some will bond out, but many others will be unable to raise the money for high bonds,” Flynn said. “There is a possibility their kids will be taken away.”

In the face of these fears, Flynn said, the asylum seekers she met in Tijuana are “incredibly resilient, incredibly hopeful, really brave.”

Hundreds of supporters, many of whom had marched 150 miles from Los Angeles, gathered on the U.S. side of the border in solidarity with the asylum seekers. It was “a really moving sight to see people coming together at the border,” said Kath Rogers, executive director of the National Lawyers Guild’s Los Angeles chapter.

When the asylum seekers arrived at the border, however, U.S. Customs and Border Protection (CBP) officers informed them that the port of entry was “at capacity” and repeated that mantra throughout the day. When Gilbert Saucedo, an attorney, human rights advocate and co-president of the L.A. chapter of the National Lawyers Guild, asked the CBP officers, “‘Is that what you were told to say?’ they said ‘yes,’” Saucedo told me in an interview. 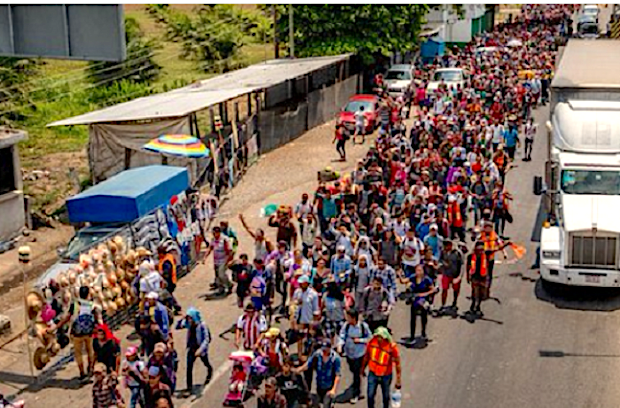 Pueblo Sin Fronteras, a group that has accompanied migrants and refugees on their journeys for 15 years, took issue with the officers, saying in a statement: “Customs and Border Protection is the largest law enforcement agency in the country, and is able to detain, transport and incarcerate thousands of people in a day, but is pretending that they don’t have the ‘capacity’ to accept 150 refugee parents and children whose arrival has been anticipated and communicated weeks in advance.”

The asylum seekers have a legal right to have their applications considered, and many of them have meritorious claims. Notwithstanding Trump’s bloviating, CBP officers began slowly processing the asylum requests. By the end of the fifth day, roughly half of the caravan asylum seekers had been taken to San Diego for processing.

Meanwhile, the remaining asylum seekers continue to wait. They are camping on the ground in unseasonably cool and drizzly weather. Mostly women and children, they are cold and hungry, despite some rations provided by their supporters.

“It just broke my heart to see them,” Saucedo said.

Flynn spoke of a group of women whose lives are endangered in their home countries because they are transgender. These women “really kept spirits up” among the asylum seekers, “singing, dancing, elevating the mood and keeping people’s hopes alive.”

Donald Trump tweeted on April 23 that he ordered the Department of Homeland Security “not to let these large Caravans of people into our Country,” adding, “It is a disgrace.”

Unsurprisingly, Trump demonstrated no compassion for those who made the dangerous trip by bus, train and on foot to escape persecution in their home countries, referring to them as “this problem.” On April 3, he tweeted, “The big Caravan of People from Honduras … had better be stopped before it gets there.” The caravan asylum seekers were “openly defying our border,” Trump tweeted on April 30, and wrote in a fundraising email to his supporters on April 26, “We need a strong, impenetrable WALL that will end this problem once and for all.”

“It’s overkill,” Thompson told HuffPost. “You would have expected [Trump] to have been briefed by intelligence officers exactly who was headed this way … We know who they are. We know where they are. And we even know why they’re coming. So to try to elevate this into some heightened sense of threat, it just didn’t measure up.”

Caravans of asylum seekers arrive at the U.S.-Mexico border annually. But this year, Trump began his Twitter and verbal assaults on the caravan before it reached Tijuana. “Are you watching that mess that’s going on right now with the caravan coming up?” he said at an April 29 rally in Michigan. “We have the worst laws anywhere in the world, we don’t have borders.” 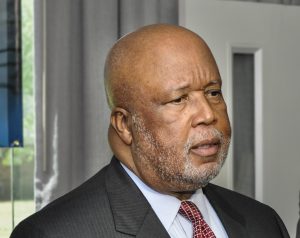 Michael Knowles, president of the asylum officers union, told The San Diego Union-Tribune, “If they’re coming to seek asylum, they need to be given due process. We shouldn’t be impeded from doing our job, and those applicants should not be impeded from having their cases heard.”

Trump betrayed his ignorance of U.S. immigration law, tweeting, “These big flows of people are all trying to take advantage of DACA. They want in on the act!” In fact, the asylum seekers have nothing to do with Deferred Action for Childhood Arrivals, which allowed immigrants brought to the U.S. as children relief from deportation before Trump sought to end the program.

Attorney General Jeff Sessions, as contemptuous of immigrants as his boss, called the caravan “a deliberate attempt to undermine our laws and overwhelm our system.” Sessions short-circuited immigration court policies, vacating a Board of Immigration Appeals decision that required immigration judges to provide asylum seekers with a full hearing. Now, thanks to Sessions, judges can deny applications without testimony from the asylum seeker.

The Legal Right to Apply for Asylum

The1951 Refugee Convention requires the United States to accept and consider asylum applications. Applicants must show they are unable or unwilling to return to their country of origin owing to a well-founded fear of being persecuted for reasons of race, religion, nationality, membership of a particular social group, or political opinion.

Once an applicant demonstrates a credible fear of persecution, which can be shown by evidence of past persecution, he or she must establish that fear stemmed from the applicant’s membership in a particular social group or political opinion. These are the two categories that cover most of the caravan asylum seekers, immigration attorney Helen Sklar, a member of the L.A. chapter executive board of the National Lawyers Guild, said in an interview.

“Membership in a particular social group” requires that members of the group share a “common, immutable” trait that is “so fundamental to the identity or conscience of the member that he or she should not be required to change it.”

The roughly 35 transgender women on the caravan will likely apply for asylum based on membership in the particular social group of being transgender, Sklar explained.

“Political opinion” is the category that applies to many of the asylum seekers, particularly those fleeing violence in Honduras. Most people in the caravan came from Honduras.

Sklar interviewed one asylum seeker who was subjected to persecution by the current Honduran regime because of her opposition to government policies. She reported being threatened and beaten at an anti-government demonstration.

U.S. policy, particularly during the Obama administration, helped create the conditions that caused the asylum seekers to undertake their long and perilous journey north. In 2009, the U.S. government supported a coup that ousted President Manuel Zelaya and made life nearly unbearable for many Hondurans.

As Pamela Spees, senior staff attorney at the Center for Constitutional Rights, wrote:

Honduras has been declared the most dangerous country in the world for land rights and environmental activists… It’s not surprising then that the rising and pervasive violence and deep economic insecurity in Honduras and the region has resulted in unprecedented numbers of refugees and migrants fleeing to seek safety and security.

Sklar, who is one of about a dozen attorneys who have been helping the asylum seekers without remuneration, criticized the Trump administration for suggesting that the asylum seekers’ motives are not legitimate.

“Who would undertake such hardship without a compelling need to find safety?” Sklar asked.

Trump’s verbal attacks on the asylum seekers did not occur in a vacuum. From instituting the Muslim Ban to attempting to end the DACA program, he has consistently appealed to his base by pursuing racist, nativist immigration policies.

Late last year, the Trump administration stopped accepting applications for a program that allowed people from Central America legally residing in the United States to bring their children here. As a result, 3,800 people—primarily children—who were being processed under that program are stranded in Honduras, El Salvador and Guatemala. Trump has also drastically reduced the admission of refugees into the U.S. and deployed National Guard troops to the border.

If he had his way, Trump would build a border wall and end the practice of family migration and the diversity visa lottery system. He would also halt the policy of releasing undocumented immigrants with notices to appear in court (a practice that he describes using the dehumanizing language of “catch and release”), opting instead to detain or deport them.

At his April 29 Michigan rally, Trump threatened to shut down the country if his wall did not get built.

“We need security. We need the wall … if we don’t get border security, we’ll have no choice. We’ll close down the country,” Trump declared.

Meanwhile, the asylum seekers brace for the next stage of their long struggle. “Our trip isn’t over,” 17-year-old Jose Coello from Honduras said as he walked into the United States from Tijuana on May 2. “This is just the next step.”

← Letter from Britain: Increasingly Illiberal Establishment and the Challenge of Jeremy Corbyn
Plight of the Rohingya: Ethnic Cleansing, Mass Rape and Monsoons on the Way  →