With peace breaking out on the Korean peninsula, beware of National Security Adviser John Bolton’s efforts to sabotage any deal, warns Gareth Porter.

The still-unscheduled Donald Trump-Kim Jong Un summit offers the opportunity for a denuclearization deal that would avoid a possible nuclear war, but that potential deal remains vulnerable to a hostile corporate media sector and political elites in the United States. At the center of this hostility is national security adviser John Bolton, who’s not just uninterested in selling a denuclearization deal to the public. He’s working actively to undermine it.

Strong circumstantial evidence indicates that he leaked intelligence to a Washington think tank sympathetic to his views in order to generate media questioning about the president’s announced plan to reach an agreement with North Korea’s leader.

Bolton made no secret of his visceral opposition to such a deal before Trump announced that Bolton would become national security adviser, arguing that Kim Jong Un would never let go of his nuclear weapons, especially since he is so close to having a real nuclear deterrent capability vis-a-vis the United States.

Even after meeting Trump on March 6 to discuss joining the administration, 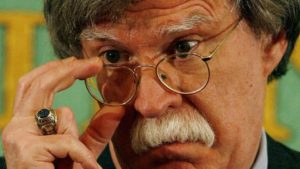 Bolton: Give us your nukes.

Bolton was not expecting the announcement of a Trump-Kim summit. Trump tweeted about progress in talks with North Korea that day, but when asked about such talks in an interview with Fox News later that same day, Bolton dismissed the whole idea. He portrayed Kim’s willingness to have discussions as aimed at diverting Washington’s attention from Pyongyang nearing its goal of having a “deliverable nuclear weapon.”mp-Kim summit was announced on March 9, Bolton made a tactical adjustment in his public stance toward talks with Kim to avoid an open conflict with Trump. He started suggesting in interviews that Trump had cleverly “foiled” Kim’s plan for long, drawn-out talks by accepting the proposal for a summit meeting. But he also urged Trump to assume a stance that would guarantee the meeting would fail.

In an interview with Fox News on the day of the summit announcement, Bolton suggested a peremptory demand by Trump to Kim: “Tell us what ports should American ships sail in, what airports American planes can land to load your nuclear weapons.” And in a second interview with Fox that day, Bolton suggested that Trump demand that Kim identify the ports and airfields to be used to “dismantle your nuclear program and put it at Oak Ridge, Tennessee, where Libya’s nuclear program lives.” Bolton’s invocation of the Libyan example of giving up a nuclear weapons program was an ostentatious way of conveying his intention to keep open the option of using force to overthrow Kim’s regime.

Bolton was staking his opposition to negotiations with Kim primarily on the argument that North Korea would simply exploit such negotiations to complete its testing of a nuclear-tipped intercontinental ballistic missile (ICBM). But former CIA Director Mike Pompeo got a concrete commitment from Kim to end all tests during their meetings in Pyongyang on April 7-8, which Kim then announced officially on April 20.

Pompeo’s report on Kim’s commitment, coming just before Bolton’s first day in the White House on April 9, immediately vitiated Bolton’s chief argument against a denuclearization agreement. But Bolton had another argument to fall back on. When a Fox News interviewer asked him on March 6 about a possible nuclear testing freeze, Bolton replied, “A freeze won’t work. The only inspections system that you could have with any prospect of finding out what they’re up to would have to be so intrusive it would threaten the stability of the regime.”

As an argument that a testing halt wouldn’t work, that comment was nonsensical: The United States has no intrusive inspections to detect a test of a long-range North Korean missile or of a nuclear weapon. But Bolton could use the need for an intrusive inspection system that North Korea would resist as an argument against a denuclearization agreement. He was well aware that in 2008, Vice President Dick Cheney forced Secretary of State Condoleezza Rice to change the agreement she had reached with North Korea in October 2007 to require an intrusive verification system at a different stage of implementation—before the United States had taken North Korea off the terrorism list and ended the application of the Trading with the Enemy Act rather than after that, as had been originally agreed. North Korea refused to accept the new verification demand and then denounced the agreement in late 2008. 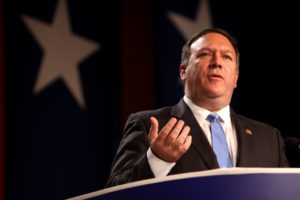 Within a few days of Bolton taking over as national security adviser, someone leaked intelligence to a Washington think tank on a North Korean facility allegedly intended to produce nuclear-grade graphite, a key component of nuclear reactors. The leak resulted in a post by David Albright, the executive director of the Institute for Science and International Security (ISIS), on April 20 with satellite images of what he identified as a North Korean nuclear-grade graphite plant. Albright wrote that a “knowledgeable government official” had identified the site of the factory on the Yalu River, which divides North Korea from China.

Albright suggested that the factory “violates the spirit of the upcoming summit processes with the United States and South Korea.” And he concluded that any agreement with North Korea “must contain its verifiable commitments not to proliferate nuclear goods and abide by internationally recognized strategic export control regimes.”

But Albright presented no evidence that the building under U.S. intelligence surveillance had any bearing on negotiations on denuclearization. His report made it clear that analysts had only suspicions rather than hard evidence that it was for nuclear-grade graphite, referring to “the suspect site” and to “the suspect facility.” Albright also admitted that nuclear-grade graphite is a “dual use” material, and that an existing North Korean facility produces it for components of domestic and foreign ballistic missiles, not for nuclear plants.

Albright nevertheless implied that nuclear-grade graphite is produced and traded covertly. In fact, it is sold online by trading companies such as Alibabalike any other industrial item.

On April 21, despite the absence of any real link between the “suspect facility” and a prospective denuclearization agreement, The Washington Post published an article by intelligence reporter Joby Warrick, based on Albright’s post, that suggested such a link. Warrick referred to a “suspected graphite production facility” that could allow North Korea’s “weapons program” to “quietly advance while creating an additional source of badly needed export revenue.”

Adopting Bolton’s key argument against a denuclearization agreement, Warrick wrote, “It is unclear how the United States and its allies would reliably verify a suspension of key facets of North Korea’s nuclear program or confirm that it has stopped selling weapons components to partners overseas.” North Korea has “a long history of concealing illicit weapons activity from foreign eyes,” Warrick argued, adding that, unlike Iran, it “does not allow inspectors to visit its nuclear facilities.”

But Warrick failed to inform readers that North Korea had allowed 24-hour, 7-day-a-week inspections of their nuclear facilities from the time the agreed framework was adopted in 1994 until December 2002, after Bolton had 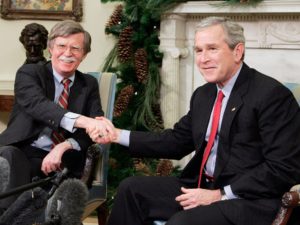 successfully engineered the George W. Bush administration’s open renunciation of that Clinton administration agreement. And in the negotiations in 2007-08, Pyongyang only had objected to the U.S. demand for intrusive inspection—including military sites—before the United States had ended its suite of hostile policies toward North Korea.

Sabotaging a Deal with Iran

The graphite factory episode would not be the first time Bolton had used alleged intelligence to try to block a negotiated agreement. In early 2004, Bolton, as undersecretary of state for arms control and international security, was determined to prevent the British, French and German governments from reaching an accord with Iran that would frustrate Cheney’s plan for an eventual U.S. military option against Iran. Bolton gave satellite images of Iran’s Parchin military complex to the International Atomic Energy Agency (IAEA) claiming that they were appropriate for certain kinds of nuclear weapons testing, as Seymour Hersh later reported. Bolton demanded that the IAEA inspect the sites, evidently hoping that Iran would refuse such an intrusive inspection and allow the Bush administration to accuse Iran of hiding covert weapons activities.

But the IAEA failed to refer to the satellite images of Parchin in two 2004 reports on Iran. Then the State Department provided them to ABC News, which reported that a State Department official “confirmed the United States suspects nuclear activity at some of [Parchin’s] facilities.” But the ABC report also quoted a former senior Department of Defense official who specialized in nuclear weapons as saying the images did not constitute evidence of any nuclear weapons-related activities. Iran let the IAEA inspect 10 Parchin sites in two separate visits in 2005. Taking environment samples in each case, the inspectors found no evidence of nuclear-related activity.

Bolton’s hopes of keeping the option of U.S. war on Iran flopped in 2004, but he still believes in a first strike against North Korea, as he urged in an op-edin late February. And he can be expected to continue to use his position in the White House to try to keep that option open as he did with Iran in 2004, in part by covert leaks of information to allies outside the government.

This article was originally published on TruthDig.

Gareth Porter is an independent investigative journalist and historian on U.S. national security policy and the recipient of the 2012 Gellhorn Prize for journalism. His most recent book is Manufactured Crisis: the Untold Story of the Iran Nuclear Scare, published in 2014.