The U.S. and Russia share strategic goals in Syria and the wider region, but Washington ideologues persist in unwelcome intervention that has led to disaster, argues Graham E.Fuller

The Trump administration delivered several dozen military strikes against Syria purportedly aimed at chemical production and storage facilities. It was an act the international community feared might lead to overt war in Syria between the US, Iran and Russia, but it came off a bit better: the strike seems to have been carefully calibrated, involved care to avoid casualties and seemed largely symbolic in nature. The strikes did not meaningfully change facts on the ground.

What sense can we make out of all these strategic events in Syria? We encounter a baffling array of players: Syrian troops, Syrian insurgents, jihadis of varying ideologies, Iranians, Russians, Americans, Israelis, Turks, Saudis, Qataris, Emiratis, Shi’ite militias, Iraqis, Kurds, Hizballah—all locked in a deadly dance. But as complex as it may be, this seven-year bloody conflict still continues to pose the very same long-term fundamental questions to US policy in Syria and the region. These questions demand an answer.

Does the U.S. Want the War to End?

In principle yes, but only under its own rigid terms which call for an end to President Bashar al-Assad’s rule and the elimination of Russian and Iranian power in Syria. None of this is within the realm of reality.

The power struggle between the Assad regime and the array of diverse insurgents has oscillated over seven years. Initially, when the government faced the first outbreak of domestic insurgency in 2011, it appeared that he might not last long in the evolving Arab Spring. But he proved resilient.

He was willing to strike back ruthlessly at the early uprisings and nip them in the bud. He was aided by the fact that the Syrian population was itself highly ambivalent about any collapse of his government. As regional regimes went it was unquestionably autocratic but not more brutal than usual in the region —at least not until early insurgent forces challenged the regime’s existence and  Damascus began to show real teeth.

The Assads: Autocratic but not more brutal than usual in the region.

In fact many Syrians did not want civil war—understandably enough since the human and material costs would be devastating. Second, large numbers of Syrians who had no fondness for Assad had even greater reason to fear what might come after him: very likely some combination of radical jihadi forces. Indeed, victorious jihadis might likely then have gone on to wage an internecine power struggle among themselves, just like the civil war among the Afghan mujahideen after the withdrawal of Soviet forces in 1988; it all but destroyed the country .

Indeed from the comfort of our own American isolation such issues more closely resemble an electronic war game, or armchair strategizing. But for people who live in war zones, stakes are overwhelmingly real. At some point almost any peace is better than almost any war. Washington might be willing to fight to the last Syrian, but most Syrians are not willing to do so when most outcomes offer only death and destruction.

But the time for speculation about the regime’s fate is now past: Assad is close to restoring his control over the whole country. Ambivalence on the part of so many Syrians, the fecklessness and divisions of so many of the anti-Assad forces, and above all serious Russian and Iranian assistance to Damascus constituted the final tipping point.

But is Washington willing to accept, however reluctantly, Assad’s restoration of control over his own country? (It’s worth noting that whatever the issues at stake in Syria, Russia and Iran were legally invited by the Syrian government to provide military assistance. The US on the other hand was not invited to intervene in Syria, and on legal grounds is fighting in Syria “illegally.”)  Indeed, Washington’s goal all along has been to notch up one more “regime change by force” in the region that has included Afghanistan, Iraq, Libya, Yemen, and perhaps Somalia, among other conflicts.

So is it justifiable, even ethical, to fight till the last Syrian? Or should the US reluctantly accept the desperately needed end to the war, and to allow restoration of public security, food, medicine, and a chance for the devastated country to rebuild itself?  From a humanitarian perspective the choice would seem clear.

So What is the U.S. Fighting For?

Washington has sought to isolate or overthrow the Assads, father and son, for over forty years; it perceived them as representing staunch (secular) anti-colonial Arab nationalism, resistance to U.S. goals, and a refusal to bow to Israel’s ever expanding borders and oppression of the Palestinians.

The world has learned that any state that does not accept the U.S.-designed order in the Middle East by definition becomes a “rogue regime”—hence losing any sovereign rights on the international scene. And Washington’s policies have all along been heavily driven by Israel’s own regional agenda. It’s a bitter pill then: acceptance of Assad’s remaining in power until the international order can eventually craft some new political process that offers more representative government there.

But U.S. policy, for all its talk of human rights and welfare, has no interest in an end to the war on anything except its own terms. It ceases to be about Syria at all any more. Syria is fated to remain the arena for grander U.S. strategic interests: the checking of Russian and Iranian influence in the Middle East. The Syrians themselves will pay the price—but they do not matter.

Yet the reality is that Washington can no longer single-handedly determine the strategic shape of the Middle East. All efforts to do so over the past fifteen years have ended in disaster for virtually everyone including the U.S.

Another reality is the presence of Russia as a diplomatic and strategic power in the Middle East. It has a history of several hundred years presence there, long before the U.S. or even Britain; even under the Russian Tsars Moscow was the official protector of Eastern Orthodox Christians in the Levant. 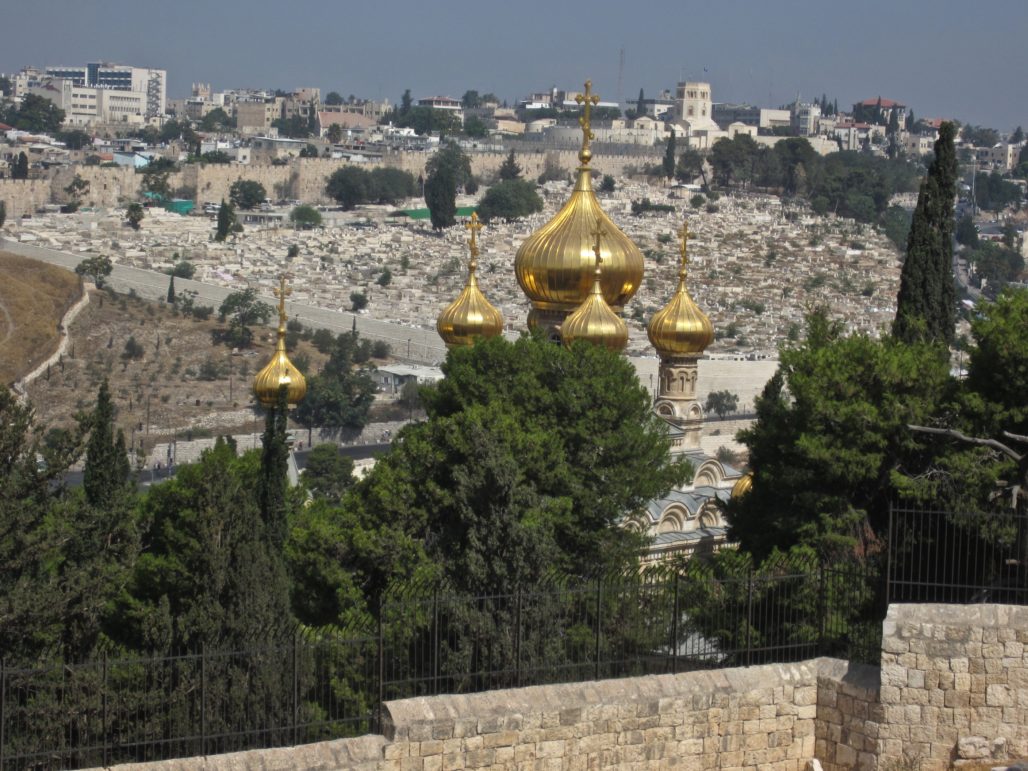 Russian church on the Mount of Olives (Wikipedia)

After a hiatus of some two decades after the fall of the USSR and the collapse of the Russian economic order, Russia is now back again as a player. That fact will not change. Nor should a Russian presence in the Middle East represent an intolerable affront to U.S. interests. Indeed, Russia and the U.S. share many common goals, not least of which is a need for regional stability, the peaceful  flow of energy, and suppression of violent jihadi movements such as ISIS or al-Qaeda.

But if neo-con and “liberal interventionist” ideologues in Washington have their way—and their power is growing—America’s supreme interest in the Middle East centers on checking Russia—amounting to a self-fulfilling prophesy of confrontation. For these ideologues there can be no accommodation:  it becomes a zero-sum game, not a win-win but a win-lose game.

This U.S. posture is also designed to perpetuate Washington’s military presence in Syria for a long time to come—with strikingly little to show for it. Russia will not be going anywhere. And Iran, now gradually normalizing its relations with most of the world, will also be resuming its place as a major Middle Eastern player. Yet Iran remains a point of obsession with Washington—equally seen as a “rogue” state— and here again reflecting Israel’s own determination to strategically dominate the Middle East itself.

Does Iran constitute a “sectarian threat” as the Saudis have it? Iran reacts as a “Shi’ite force” to the degree that it is attacked as an “illegitimate,” that is, Shi’ite force by rival ultra-conservative Wahhabi Saudi forces. Iran views itself primarily not as a Shiite state but as a Muslim state—one intent on further blocking western interventionism in the Middle East. And it does not believe that monarchies represent the wave of the Middle Eastern future.

So the question remains: does Washington truly seek an end to the war—a war that it cannot win? Or will it fight on in a losing, devastating situation in a country to which it was not invited? Will it continue to seek “regime change” in yet another state with all the subsequent chaos, instability, and openings for the region’s most radical jihadi forces?

And are we ourselves to be manipulated as instruments for the achievement of local Israeli and Saudi strategic goals in the region?

This piece originally appeared on http://grahamefuller.com/blog/

Graham E. Fuller is a former senior CIA official, author of numerous books on the Muslim World; including “Breaking Faith: A novel of espionage and an American’s crisis of conscience in Pakistan,” and most recently “BEAR.” (Amazon, Kindle) grahamefuller.com

73 comments for “What is the U.S. Fighting for in Syria?”