Unlike the U.S., Europe has strong, influential labor unions; yet they have been unable, or unwilling, to stop the austerity-based policies demanded by European institutions, reports Andrew Spannaus.

Railway workers are striking across France, bringing up to 80 percent of high-speed trains to a halt in recent days. In a major European country dependent on rail for a significant portion of its transportation, the protests are predictably causing chaos, as organized labor flexes its muscles to show that it is still a force to be reckoned with.

On April 10, German airport workers also went on strike, leading to the cancellation of over 800 flights by the national air carrier, Lufthansa. In this case the dispute is over a pay increase for around 2.3 million public sector employees, who have seen their incomes stagnate despite the country’s economic growth overall.

Such protest actions are not uncommon across Europe, and indeed have come to be accepted as a fact of life in many countries. Labor union membership varies greatly throughout the continent, from less than 10 percent in France – despite the effective strikes – to a high of around 70 percent in Scandinavian countries such as Sweden and Denmark. Yet even when their membership figures are modest,unions often have a central role in collective bargaining, and they are eager to show that they are still relevant in a world that has changed greatly due to deregulation and globalization over the past 35 years.

Organized labor’s clout in Europe is declining though, which should not come as a surprise. One of the central tenets of the economic policies followed by the European Union is “flexibility” of the labor market, part of the overall neoliberal philosophy that views any sort of restrictions and rules on labor and capital as stifling profit-making, free enterprise.

Since the 1990s in particular, there has been a concerted, top-down effort to weaken protections for workers, claiming this is the only way to attract capital and unleash a new wave of economic growth. The E.U. constantly harps on the need for “structural reforms” that allow for “removing the constraints to job creation and labor market participation.” This generally means making it easier to fire people, which in theory will allow companies to hire new workers when needed, without the fear of a permanent cost burden in the future.

Labor rules are indeed rigid in many European countries. Yet it’s no secret that to workers living through an economic crisis, such reforms can sound like a one-way street towards lower living standards, at precisely the wrong time.

The legislative push for greater labor market flexibility in Europe has often been accompanied by public denigration of unions and any sort of regulation of public services.

Defending jobs is considered selfish. For example, when older workers seek protections to avoid finding themselves jobless in their 50s or 60s, or they obtain state aid through various types of social shock absorbers, a debate inevitably ensues about how older members of society are stealing from the young. In a situation of allegedly limited resources, the establishment, and the media that serves it, pits one generation against the other.

One of the major accusations against unions is that they think only of themselves, not of the needs of society as a whole. However, workers make up the majority of society. It is clearly not in their interests to accept the neoliberal establishment demand that they should accept a “new reality” and embrace globalization.

In recent decades organized labor in Europe has generally failed to work effectively for the common good. It’s not that unions have not defended workers’ rights when faced with a changing labor market; rather, they have focused on narrow goals, while failing to counter the economic policies of the European Union itself, which have an overriding effect on political decision-making.

The dominant issue in the E.U. today is the social and economic effects of the austerity-based, monetarist policies emanating from Brussels and Frankfurt. Those policies have provoked a widespread backlash against governing institutions. This is being expressed in the rise of so-called populist, anti-system political parties. 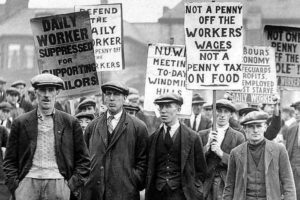 European labor unions: a long way from their heyday of militant action

Unions: Part of the Problem

It’s legitimate to ask where the major unions were when the Troika – the formal alliance between the European Commission, the European Central Bank, and the International Monetary Fund – was imposing massive austerity on countries such as Greece, Spain and Italy?

What did organized labor do to stop the construction of the E.U. based on neoliberal principles, which has led to high unemployment and unstable working conditions, all while guaranteeing practically unlimited bailouts for the financial sector? European labor unions have come a long way from its heyday of militant industrial action and general strikes in the early half of the 20th Century.

There have been plenty of protests and strikes over time, but if we take a step back from the single battles, we see that war has not been waged at the highest level. This is because many large labor unions have essentially been co-opted by the establishment over the past 25 years. Instead of fighting it against, unions have participated in the construction of economic policies that are diametrically opposed to most workers’ interests.

The E.U. has formally adopted the neoliberal mantra that any state intervention into the economy is negative, and that “flexibility” and attraction of financial investment are the only roads to growth. There are exceptions of course, but the ideology is clear, and it is used as a bludgeon whenever a member state attempts to react to a crisis with tools such as public investment or better regulation. These have been branded as contrary to the overarching principle of “competition.”

European workers had been promised a protection of their interests in the lead-up to the formal integration of the European market. For example, Jacques Delors, then President of the Commission of the European Communities, pictured above giving an address to the British Trades Union Congress in Bournemouth in 1988, promised that an integrated European market would develop “backward regions of the community,” “restructure industrial regions in decline,” “fight against long-term unemployment,” “provide jobs for young people,” and protect the social safety net.

“It would be unacceptable for Europe to become a source of social regression, while we are trying to rediscover together the road to prosperity and employment,” said Delors. And the unions bought it. “The only card game in town is in a town called Brussels,” said Ron Todd, then general secretary of the Transport and General Workers Union.

But the Maastricht Treaty of 1992 betrayed these promises, gradually hardening over the years through the increasing reach of E.U. legislation that has ultimately gone hand-in-hand with the harsh budget cuts and tax increases demanded during the Euro crisis that affected numerous countries starting in 2009-2010.

Because of a lack of “market confidence” in the sovereign debt of Greece, Spain, Italy and others, the Troika demanded cuts in wages, pensions, healthcare and numerous other public services. These moves paid tribute to the financial markets, which ultimately made things worse. They acted as a damper on economic activity and thus further aggravated the fiscal crisis.

The result, even when recovery eventually set in, has been high long-term unemployment, an explosion of the percentage of temporary and unstable jobs, and low wages, the exact opposite of what Delors had promised.

But because it benefits their interests and not workers’, Troika officials continue to push the same formula. Just a few days ago, for example, David Lipton of the IMF told Spaniards that it was thanks to “wage moderation” and “flexibility” that jobs are being recovered in Spain.

But given the continuing problems “there is still the need for greater flexibility in labor markets to provide a new engine of growth,” he demanded.” Translated bluntly, the message is that working for less money, with fewer protections, is the only way to hope you’ll get a job at all.

On April 6, I went to a meeting of a labor union in Milan to hear a talk by Giorgio Cremaschi, formerly a national leader of the FIOM metalworkers union, an affiliate of one of the largest labor organizations in Italy, the CGIL.

Cremaschi gave a rousing speech to the local members of the independent USB (Base Labor Union) about the disastrous policies pushed by the E.U., which have prioritized budget rules over human well-being. This has come to the point – Cremaschi noted – that the basic social rights enshrined in the Italian Constitution now take a back seat to the latest addition to the country’s constitutional law, the requirement of a balanced budget.

The problem discussed at the USB meeting is that the largest labor unions in Italy have consistently refused to object to the neoliberal policies of the E.U. They haven’t opposed any of the European treaties adopted over the past 25 years, for example, which have gradually removed decision-making power from national governments and put it in the hands of a supranational bureaucracy that generally caters to a system dominated by speculative finance.

However, Cremaschi’s most pointed remarks were aimed not at the institutions in Brussels or the bankers on Wall Street; he laid the blame for the imposition of what he calls “fascism” against working families, squarely at the feet of the political class in Italy, and the large labor unions themselves.

Cremaschi criticized centrist leaders for accepting the narrative that globalization, with its negative effects on working families, is an objective, inevitable process. The truth is, he said, that a series of decisions were made to impose a free market ideology that has benefitted the few, while impoverishing the many. His conclusion was that real change can only come through opposition to the instrument used to force the acceptance of these policies, the European Union.

Cremaschi and the USB approach these issues from the left, but the same basic arguments are used heavily by right-wing groups that have emerged in elections throughout Europe over the past year. The economic policies of the E.U. represent the common enemy for these anti-system unions and political parties, and in their view, mainstream organized labor is just as guilty as the Troika for the economic difficulties of the middle and lower class across Europe.

Andrew Spannaus is a journalist and strategic analyst based in Milan, Italy. He was elected Chairman of the Milan Foreign Press Association in March 2018. He has published the books “Perché vince Trump” (Why Trump is Winning – June 2016) and “La rivolta degli elettori” (The Revolt of the Voters – July 2017).

← International Lawyers: Strike Against Syria Would Be Illegal
America’s Long History of Trying to Determine Who Rules Syria →