As American drums beat again for war, Rick Sterling steps back to contemplate the possible consequences this time. 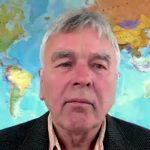 Western neoconservatives and hawks are driving the international situation to increasing tension and danger. Not content with the destruction of Iraq and Libya based on false claims, they are now pressing for a direct US attack on Syria.

As a dangerous prelude, Israeli jets flying over Lebanese airspace fired missiles against the T4/Tiyas Airbase west of Palmyra following reports on Sunday of a chemical weapons attack in Douma, a suburb of Damascus under rebel control.

As reported at Tass, the Chief of Russia’s General Staff, Valery Gerasimov, predicted the alleged use of chemicals almost a month ago. The report from March 13 says, “Russia has hard facts about preparations for staging the use of chemical weapons against civilians by the government forces. After the provocation, the US plans to accuse Syria’s government forces of using chemical weapons … furnish the so-called ‘evidence’ … and Washington plans to deliver a missile and bomb strike against Damascus’ government districts.”

Gerasimov noted that Russian military advisors are staying in the Syrian Defense Ministry’s facilities in Damascus and “in the event of a threat to our military servicemen’s lives, Russia’s Armed Forces will take retaliatory measures to target both the missiles and their delivery vehicles.”

The situation is clearly fraught with the risk of sliding into international conflict between the two biggest nuclear weapons powers with all that that implies. Civilization itself is being put in peril so that the West can continue supporting sectarian armed groups seeking to overthrow the Assad government, in violation of international law and the UN Charter.

The most powerful country in the world is now led by a real estate, hotel and entertainment mogul without political experience. Behind the scenes, there is an entrenched foreign policy establishment determined to maintain and reclaim U.S. unilateral “leadership” of the world. American leaders fear that the U.S. is losing influence, prestige and power around the world. Israel and Saudi Arabia are seeing their designs on regional dominance failing.

East Ghouta is a district of farms and towns on the north-east outskirts of Damascus. For the past six years, various armed factions controlled the area. On a nearly daily basis, they launched mortar and hell cannon missile attacks into Damascus, and have killed thousands of civilians. This author personally witnessed two such mortar attacks in April 2014.

By the end of March most of East Ghouta had been retaken by the government. With the peaceful evacuation of armed militants, civilians flooded into the humanitarian corridors and then government camps for the displaced. The campaign was proceeding quickly with minimal loss of life as the Russian Reconciliation officers negotiated agreements which allowed the militants to keep small weapons and be transported to Idlib in the north.

Journalist Vanessa Beeley documented the situation including the happiness and relief of many civilians as they finally made it to safety. One described the feeling as “like being reborn”. Robert Fisk of Britain’s Independent newspaper was on site and reported what he saw first hand in stories titled Watching on as Islamist fighters are evacuated from war-torn Eastern Ghouta and Western howls of outrage over the Ghouta siege ring hollow.

As reported at the Russian Reconciliation Centre, by the end of March, 105,857 civilians had moved into government controlled areas while 13,793 militants, plus 23,433 family members had been transported north. Those who wanted to stay, including former fighters, were welcomed. They could rejoin Syrian society with the same rights and obligations as other Syrians.

The last remaining opposition stronghold was the town of Douma, controlled by the Saudi-funded Jaish al Islam. Negotiations were prolonged because Jaish al Islam did not want to go to Idlib, which is dominated by another militant opposition group, Jabhat al Nusra also known as Hayat Tahrir al Sham. It is the al Qaeda affiliate in Syria.

There has been no objective investigation. The media claims are based on statements and videos from members of the Syrian American Medical Society (SAMS) and the White Helmets. Both organizations receive significant funding from the US government and are not neutral as aid organizations should be. They both call for Western intervention in Syria.

Chemical weapons have emerged as the quick and easy justification for aggression. One year ago, in April 2017, it was the incident at Khan Sheikhoun. That resulted in a US attack on a Syrian air base just days later. As reported here by Consortium News‘ late founder, Robert Parry, the subsequent investigation discovered that dozens of victims had shown up in hospitals in diverse locations and up to 100 kms away from the scene of the crime before the event happened. Indicative of apparent bias by the investigators, this red flag pointing to fraud was not probed further. If it was just a few victims or just one location, it might be a mistake in time record-keeping. However in this case there were dozens of discrepancies in multiple locations, clearly raising the possibility of fraud. 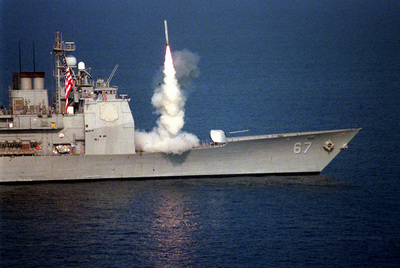 Syrian armed opposition is aiming for U.S. military operation, such as a Tomahawk cruise missile strike against the Syrian government. (DOD photo)

Now we have the incident in Douma. The armed opposition is in retreat. They are losing the war and are desperate. They have tried since 2012 to pressure the U.S. and NATO to intervene directly on their side. The rebels have access to chemical weapons in East Ghouta and they have a motive. They also have thousands of prisoners. This group put hundreds of prisoners, primarily women and children, in cages on the streets of Douma.

The timing of the chemical weapons incidents is also noteworthy. As documented here, one year ago on March 30, 2017, U.S. Ambassador to the UN Nikki Haley said U.S. policy was no longer focused on getting Assad out. Five days later the chemical incident at Khan Sheikhoun happened, followed quickly by blaming the Syrian government without evidence, then the U.S. attack on a Syrian air base and a then restoration of the demand that “Assad must go.”

On March 29 this year, Trump said that U.S. forces will withdraw from Syria “very soon.” This was followed by outcries from the media and political establishment. Once again, following Saturday’s incident, the U.S. is again threatening to intervene. The chemical weapons incidents have consistently resulted in the reversal of a proposed change in hostility toward Syria.

Neoconservatives and the supporters of ‘regime change’ foreign policy have various theories why the Assad government would perpetrate a chemical weapons attack. Senator John McCain says the Syrian President was “emboldened” by Trump’s call to withdraw. Juan Cole, an academic who promoted the assaults on Libya in 2011, has a different theory. He says “Chemical weapons are used by desperate regimes that are either outnumbered by the enemy or are reluctant to take casualties in their militaries. Barrel-bombing Douma with chem seems to have appealed to the regime as a tactic for this reason. It had potential of frightening the Douma population into deserting the Army of Islam.”

In contrast with his theory, chemical weapons were used extensively by the U.S. in Vietnam and Iraq when they were far from desperate. As evidenced in the flow of civilians into government held areas, most of the civilian population are happy to get away from the sectarian and violent Army of Islam (“Jaish al Islam”). Cole seems to be basing his theories on inaccurate western media coverage just as he did regarding Libya where sensational claims about a looming massacre in Benghazi were later shown to be fraudulent.

It’s clear who benefits from sensational media coverage about a chemical weapons incident: those who seek to want the U.S. to intervene militarily. Every time there is an incident, and well before an investigation has even begun, it is seized on by governments and organizations who’ve sought regime change in Syria since the start of the war, and perhaps even earlier.

The manipulation of western opinion about the Syrian conflict using fake events is not theory; it has been proven. A good example is the fake kidnapping of NBC reporter Richard Engel in December 2012. Engel and his media team were reportedly kidnapped and 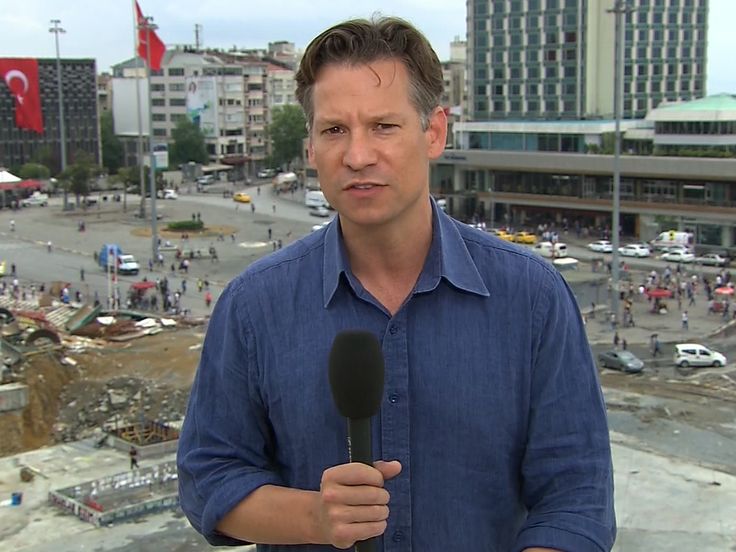 threatened with death by “shabiha” supporters of the Syrian president. After days in captivity the American team was supposedly rescued by Free Syrian Army “rebels” after a shootout. In 2015 it was confirmed this was a hoax perpetrated by the FSA and their American supporters. The entire charade was carried out by the “rebels”. The goal was to demonize the Assad government and its supporters, and to romanticize and increase support for the armed opposition. Neither Engel nor NBC confessed to the reality until it was about to be exposed years later, pointing to duplicity and collusion in the deception.

Four and a half years ago, on August 21, 2013, the most famous chemical weapons incident occurred. The Syrian government was immediately accused of launching a sarin attack which killed hundreds of children and civilians. Over the next six months investigations were carried out. The conclusions of Seymour Hersh, Parry and the research site whoghouta.com concluded that the attack was almost certainly not from the government but actually from one of the ‘rebel’ factions with support from Turkish intelligence services. Two Turkish parliamentary deputies held a press conference and publicly revealed some of the evidence. The intent then, as now, was to provide justification and provocation for the US and NATO to bomb Syrian government installations.

The Drums are Pounding

Today there is the imminent possibility of a major attack based on the allegations of a clearly biased source, with international law and legal due process tossed aside. Why is violence being threatened before there is a serious, independent investigation of the chemical incident? If the accusations against Syria are true, why not let it be investigated, especially now that the area was liberated on Monday and safe access can be provided?

The drums of war are pounding. After over one year of incessant Russia bashing and disinformation, is the public ready to go to war with Russia over Syria? Neoconservative hawks and their Israeli and Saudi allies do not seem alarmed by this prospect. Their plans and predictions for Iraq, Libya and Yemen were delusional fantasies with the price paid in blood by the people of those countries and in treasure by Americans as well. Sadly, there has not been any accountability for the media and political establishment that promoted and launched those wars. Now they want to escalate the aggression by attacking Syria, causing vastly more blood to flow and risking confrontation with a country which can fight back.

Rick Sterling is an investigative journalist based in the San Francisco Bay Area. He can be contacted at rsterling1@gmail.com

← The Washington Post’s ‘Breakthrough’ on the MLK Murder
Doomsday Machines →

131 comments for “Taking the World to the Brink”