Following a failed attempt by three senators to end U.S. support for the Saudi-led war against Yemen, the State Department announced a sale of 6,700 missiles to Saudi Arabia, Ann Wright reports.

How much more slaughter in Yemen is the United State government willing to help with?

We found out when State Department announced on March 23 the sale of 6,700 anti-tank missiles to Saudi Arabia. 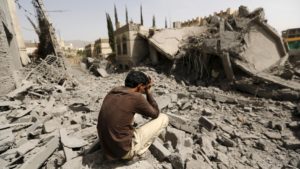 A man mourns the aftermath of a Saudi-led airstrike in Sanaa, the capital of Yemen, on June 15, 2015.

Crown Prince Mohammed bin Salman met Defense Secretary Jim Mattis to discuss the Saudi-led bombing of Yemen on March 23 and the missile deal was announced a few hours later. The State Department notified Congress of the proposed sale which is a part of a $1 billion weapons sales deal.

Coming almost three years to the day that Saudi Arabia, supported by the U.S., began a campaign of airstrikes against Houthi rebels in Yemen, the State Department ironically and sarcastically wrote: “This proposed sale will support U.S. foreign policy and national security objectives by improving the security of a friendly country which has been, and continues to be, an important force for political stability and economic growth in the Middle East… and will not alter the basic military balance in the region.”

The U.S. increased its air strikes in Yemen in 2017 by having six times more airstrikes that in 2016.

Secretary of Defense Mattis was unconcerned about civilian casualties in Yemen: “We have been working very hard with the new U.N. envoy to end the fight in Yemen. And we believe that Saudi Arabia is part of the solution. They have stood by the United Nations recognized government. And we are going to end this war. That’s the bottom line.”

The U.S. is not the only country whose weapons manufacturers are making a killing out of killing Yemeni kids. The U.K., France, Spain and Italy, have sold billions of dollars of weaponry to countries around the world, with Saudi Arabia being one of the biggest weapons purchaser.

A war powers resolution for Yemen that represented an attempt to insert congressional oversight into U.S. military operations in the deadly civil war there was defeated by a vote of 55-44 by the U.S. Senate on March 21.  Co-sponsored by three members of the Senate — Sens. Bernie Sanders (I-Vt.), Mike Lee (R-Utah), and Chris Murphy (D-Conn), the resolution called for the end of the U.S. role in the war.

Under the proposed massive weapons sale, Saudi Arabia will buy 6,696 TOW 2B missiles and associated training materials worth $670 million; parts and repairs support worth $300 million for its Abrams tanks and fighting vehicles, and maintenance equipment worth $100 million for its fleet of AH-64D/E, UH-60L, Schweizer 333 and Bell 406CS helicopters.

Congress now has 30 days to block the whole or parts of the sale through a privileged resolution under the AECA.

To save the lives of innocent women and children in Yemen, let’s hope Congress says no more sales to Saudi Arabia.

Ann Wright was in the U.S. Army/Army Reserves for 29 years and retired as a Colonel.  She was also a U.S. diplomat for 16 years and served in U.S. Embassies in Nicaragua, Grenada, Somalia, Uzbekistan, Kyrgyzstan, Sierra Leone, Micronesia, Afghanistan and Mongolia.  She resigned from the U.S. government in March 2003 in opposition to Bush’s war on Iraq and since then has been very active in anti-war and social justice issues.  She is the co-author of “Dissent: Voices of Conscience.”