In some cases, the hint that a country might be removing presidential term limits provides Washington sufficient cause to support a coup, but in other cases Washington celebrates presidents-for-life, observes Ted Snider.

Donald Trump caused some concern last week when he appeared to praise Chinese President Xi Jinping’s removal of term limits on the president from the Chinese constitution, clearing the path for him to become “president for life.” At a fundraiser in Florida, Trump said, “He’s now president for life. President for life. No, he’s great.” He then added, to enthusiastic cheers: “I think it’s great. Maybe we’ll have to give that a shot some day.” 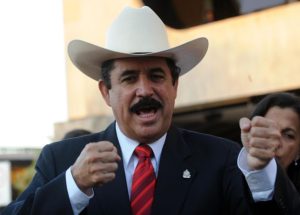 Term limits became a constitutional issue early in America. Many of the framers backed lifetime appointment for presidents. Alexander Hamilton and James Madison both supported lifetime terms. So did others. One person would have swung the vote as it was defeated by a margin of only six votes to four.

The Constitutional Convention of 1787 did not impose term limits on the president. And, despite Washington declining to run for a third term, Ulysses S. Grant, Theodore Roosevelt and Woodrow Wilson all sought third terms. Franklin Delano Roosevelt won a third term. And a fourth. It wasn’t until the middle of the last century that the 22nd amendment ensured that “No person shall be elected to the office of the President more than twice …”

That is a sentence that has recently come up for consideration in other countries too: none more troublingly than Honduras as far as the U.S. reaction goes. In 2015, the Supreme Court of Honduras removed the one-term limit on the president, clearing the way for Juan Orlando Hernández to run for a second term in office. The U.S. has supported Hernández’s bid for a second term though it is not clear the Honduran court had the authority to make that constitutional amendment without a vote by the people. It is also not clear that the court did legitimately make that amendment since a five-member panel and not the full 15-member court voted on the change.

The same support was not offered to the previous Honduran president, the popularly elected Manuel Zelaya, though he didn’t go as far as Hernández. Zelaya did not touch the constitution, he did not change presidential term limits and he did not run for a second term. He merely opened the constitutional change for discussion. Zelaya only had to announce a plebiscite to see if Hondurans wanted to draft a new constitution for the hostile political establishment to falsely translate his intention into an intention to seek an unconstitutional second term and oust him in a coup.

Though the U.S. backed Hernández, who actually did change term limits and actually did run for reelection, it not only failed to back the far more innocent Zelaya, it backed the coup against him. Rodolfo Pastor Fasquelle, the minister of culture in the Zelaya government, said on Democracy Now that “I know for a fact that CIA operatives and military personnel of the United States were in direct contact with the conspirators of the coup d’état and aided the conspirators of the coup d’état.”

Latin American expert Mark Weisbrot at least partially corroborated that claim when he told me that “the Obama administration acknowledged that they were talking to the [Honduran] military right up to the day of the coup, allegedly to convince them not to do it.” But, he added, “I find it hard to believe that they couldn’t convince them not to do it if they really wanted to: the Honduran military is pretty dependent on the U.S.”

After the coup d’état, then Secretary of State Hillary Clinton admitted that she aided the coup government by helping to block the return of the elected government: “In the subsequent days [after the coup] I spoke with my counterparts around the hemisphere, including Secretary [Patricia] Espinosa in Mexico. We strategized on a plan to restore order in Honduras and ensure that free and fair elections could be held quickly and legitimately, which would render the question of Zelaya moot.”

The U.S. did all this while being in full knowledge that what was unfolding in Honduras was a coup. By July 24, 2009, less than a month after the coup, the White House, Clinton and many others were in receipt of a cable called “Open and Shut: the Case of the Honduran Coup” that was sent from the U.S. embassy in Honduras. The embassy cable says “There is no doubt that the military, Supreme Court and National Congress conspired on June 28 in what constituted an illegal and unconstitutional coup.” And just in case there were any objections, the cable adds that “none of the … arguments [of the coup defenders] has any substantive validity under the Honduran constitution.”

The U.S. backed a coup in Honduras that removed a popular president for merely considering removing term limits. So, it should have been surprising when it backed a president in Honduras for actually removing term limits and seeking reelection, but, of course, it was never about term limits. It was fine for Juan Orlando Hernández because, according to State Department cables, “he has consistently supported U.S. interests.” But, it was not fine for Manuel Zelaya because he dared to serve the interests of the people who elected him instead of U.S. interests.

So, when Washington’s servant removed presidential term limits in America’s backyard, the U.S. embassy in Honduras certified his reelection, saying it was “pleased” with its “transparency.”

32 comments for “How Many Terms Till You’re a Tyrant Ripe for Regime Change?”