A lack of skepticism has characterized much of the reporting on Russiagate, with undue credibility being given to questionable sources like the Steele dossier, and now progressives like Jane Mayer and Cenk Uygur are joining the bandwagon, Ray McGovern observes. 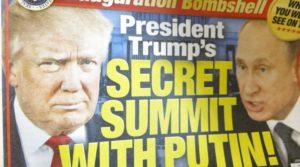 Russiagate reporting has increasingly taken on a tabloidish and sensationalist character.

Jane Mayer of The New Yorker and Cenk Uygur of The Young Turks are the latest progressives to jump on the anti-Trump, pro-Russiagate bandwagon. They have made it crystal clear that, in Mayer’s words, they are not going to let Republicans, or anyone else, “take down the whole intelligence community,” by God.

Odd? Nothing is too odd when it comes to spinning and dyeing the yarn of Russiagate; especially now that some strands are unraveling from the thin material of the “Steele dossier.”

Before the 2016 election, British ex-spy Christopher Steele was contracted (through a couple of cutouts) by the Clinton campaign and Democratic National Committee to dig up dirt on candidate Donald Trump. They paid him $168,000. They should ask for their money back.

Mayer and Uygur have now joined with other Trump-despisers and new “progressive” fans of the FBI and CIA – among them Amy Goodman and her go-to, lost-in-the-trees journalist, Marcy Wheeler of Emptywheel.net. All of them (well, maybe not Cenk) are staying up nights with needle and thread trying to sew a silk purse out of the sow’s-ear dossier of Steele allegations and then dye it red for danger.

Monday brought a new low, with a truly extraordinary one-two punch by Mayer and Uygur.

Mayer does her part in a New Yorker article, in which she – intentionally or not – cannot seem to see the forest for the trees.

In her article, Mayer explains up front that the Steele dossier “painted a damning picture of collusion between Trump and Russia,” and then goes on to portray him as a paragon of virtue with praise that is fulsome, in the full meaning of that word. For example, a friend of Steele told Mayer that regarding Steele, “Fairness, integrity, and truth, for him, trump any ideology.”

Now, if one refuses to accept this portrait on faith, then you are what Mayer describes as a “Trump defender.” According to Mayer, Trump defenders argue that Steele is “a dishonest Clinton apparatchik who had collaborated with American intelligence and law enforcement officials to fabricate false charges against Trump and his associates, in a dastardly (sic) attempt to nullify the 2016 election. According to this story line, it was not the President who needed to be investigated, but the investigators themselves.”

I could not help but think that Mayer wrote her piece some months ago and that she and her editors might have missed more recent documentary evidence that gives considerable support to that “dastardly” story line. But seriously, it should be possible to suspect Steele of misfeasance or malfeasance – or simply telling his contractors what he knows they want to hear – without being labeled a “Trump supporter.” I, for example, am no Trump supporter.  I am, however, a former intelligence officer and I have long since concluded that what Steele served up is garbage.

Mayer reports that Richard Dearlove, head of MI6 from 1999 to 2004, described Steele as “superb.” Personally, I would shun any “recommendation” from that charlatan. Are memories so short? Dearlove was the intelligence chief who briefed Prime Minister Tony Blair on July 23, 2002 after a quick trip to Washington. The official minutes of that meeting were leaked to the London Times and published on May 1, 2005.

Dearlove explained to Blair that President George W. Bush had decided to attack Iraq for regime change and that the war was to be “justified by the conjunction of terrorism and weapons of mass destruction.” Dearlove added matter-of-factly, “The intelligence and facts are being fixed around the policy.”

Another character reference Mayer gives for Steele is former CIA Deputy Director John McLaughlin (from 2000 to 2004) who, with his boss George Tenet, did the fixing of intelligence to “justify” the war on Iraq. State Department intelligence director at the time, Carl Ford, told the authors of “Hubris: The Inside Story of Spin, Scandal, and the Selling of the Iraq War” that both McLaughlin and Tenet “should have been shot” for what they did.

And then there is CIA veteran spy John Sipher who, Mayer says, “ran the Agency’s Russia program before retiring, in 2014.” Sipher tells her he thinks the Steele dossier is “generally credible” in “saying what Russia might be up to.” Sipher may be a good case officer but he has shown himself to be something of a cipher on substance.

Worse still, he displays a distinct inclination toward the remarkable view of former National Intelligence Director James Clapper, who has said that Russians are “typically, almost genetically driven to co-opt, penetrate, gain favor, whatever.” If Mayer wanted to find some ostensibly authoritative figure to endorse the kind of material in Steele’s dossier, she surely picked a good one in Sipher.

Mayer notes, “It’s too early to make a final judgment about how much of Steele’s dossier will be proved wrong, but a number of Steele’s major claims have been backed up by subsequent disclosures. She includes, as flat fact, his claim that the Kremlin and WikiLeaks were working together to release the DNC’s emails, but provides no evidence.

Mayer, however, should know better. There have been lots of holes in the accusation that the Russians hacked the DNC and gave the material to WikiLeaks to publish. Here’s one major gap we reported on Jan. 20, 2017: President Barack Obama told his last press conference on Jan. 18, that the U.S. intelligence community had no idea how the Democratic emails reached WikiLeaks.

Using lawyerly language, Obama admitted that “the conclusions of the intelligence community with respect to the Russian hacking were not conclusive as to whether WikiLeaks was witting or not in being the conduit through which we heard about the DNC e-mails that were leaked.”

It is necessary to carefully parse Obama’s words since he prides himself in his oratorical constructs. He offered a similarly designed comment at a Dec. 16, 2016 press conference when he said: “based on uniform intelligence assessments, the Russians were responsible for hacking the DNC. … the information was in the hands of WikiLeaks.”

Note the disconnect between the confidence about hacking and the stark declarative sentence about the information ending up at WikiLeaks. Obama does not bridge the gap because to do so would be a bald-faced lie, which some honest intelligence officer might call him on. So, he simply presented the two sides of the chasm – implies a connection – but leaves it to the listener to make the leap.

It was, of course, WikiLeaks that published the very damaging Democratic information, for example, on the DNC’s dirty tricks that marginalized Sen. Bernie Sanders and ensured that Secretary of State Hillary Clinton would win the Democratic nomination. What remained to be demonstrated was that it was “the Russians” who gave those emails to WikiLeaks. And that is what the U.S. intelligence community could not honestly say.

Saying it now, without evidence, does not make it true.

Cenk Uygur of The Young Turks at once picked up, big time, on the part of Mayer’s article that homes in on an “astonishing” report from Steele in late November 2016 quoting one “senior Russian official.” According to that official, “The Kremlin had intervened to block Trump’s initial choice for secretary of state, Mitt Romney.” Steele’s late November memo alleged that the Kremlin had asked Trump to appoint someone who would be prepared to lift Ukraine-related sanctions and cooperate on security issues like Syria.

Mayer commented, “As fantastical as the memo sounds, subsequent events could be said to support it.” Fantastical or not, Uygur decided to run with it. His amazing 12-minute video is titled: “New Steele Dossier: Putin PICKED Trump’s Secretary of State.” Uygur asks: “Who does Tillerson work for; and that also goes for the President.”

As an antidote to all the above, let me offer this cogent piece on the views of Joseph E. diGenova, who speaks out of his unique experience, including as Counsel to the U.S. Senate Select Committee on Intelligence (the Church Committee). The article is entitled: “The Politicization of the FBI.”

“Over the past year,” diGenova wrote, “facts have emerged that suggest there was a plot by high-ranking FBI and Department of Justice (DOJ) officials in the Obama administration, acting under color of law, to exonerate Hillary Clinton of federal crimes and then, if she lost the election, to frame Donald Trump and his campaign for colluding with Russia to steal the presidency.”

He pointed out that nearly half of Americans, according to a CBS poll, believe that Mueller’s Trump-Russia collusion probe is “politically motivated.” And, he noted, 63 percent of polled voters in a Harvard CAPS-Harris Poll believe that the FBI withheld vital information from Congress about the Clinton and Russia collusion investigations.

This skepticism is entirely warranted, as diGenova explains, with the Russiagate probe being characterized by overreach from the beginning.

Ray McGovern works with Tell the Word, a publishing arm of the ecumenical Church of the Saviour in inner-city Washington. He served in Army and CIA intelligence analysis for 30 years and, after retiring, co-founded Veteran Intelligence Professionals for Sanity (VIPS).

113 comments for “‘Progressive’ Journalists Jump the Shark on Russiagate”