Exclusive: Americans should be very concerned about Russian President Vladimir Putin’s announcement on Russia’s breakthroughs in weapons technology – not necessarily because they pose a threat, but because it will mean vast fortunes spent in the U.S. on an arms race, Jonathan Marshall argues.

Be afraid. Be very afraid of Russian President Vladimir Putin’s latest boast to his Federal Assembly that Russian scientists have come up with “a breakthrough in developing new models of strategic weapons” aimed at the United States. 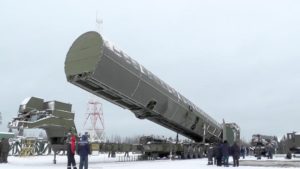 In this video grab provided by RU-RTR Russian television via AP television on Thursday, March 1, 2018, Russia’s new Sarmat intercontinental missile is shown at an undisclosed location in Russia. (AP)

Don’t be afraid that he has any intention of using them. Don’t even be afraid that most of the weapons he demonstrated through animated simulations are operational.

Be afraid, rather, that armchair Cold Warriors in the United States will shamelessly exploit Putin’s speech to justify billions—no, trillions—of dollars in needless spending on a pointless nuclear arms race.

Achieving their agenda was made easier by media coverage of the speech, which reported that Putin “threatened the West” (New York Times) and “represented an escalated level of martial rhetoric even by his pugnacious standards” (Washington Post).

Putin in fact explicitly and repeatedly emphasized that his claimed new weapons are not offensive, but rather designed to maintain Russia’s nuclear deterrent in the face of growing U.S. anti-missile systems.

Responding to the United States

“Back in 2000, the US announced its withdrawal from the Anti-Ballistic Missile Treaty,” he explained. “We saw the Soviet-US ABM Treaty signed in 1972 as the cornerstone of the international security system… Together with the Strategic Arms Reduction Treaty, the ABM Treaty not only created an atmosphere of trust but also prevented either party from recklessly using nuclear weapons.”

“We did our best to dissuade the Americans from withdrawing from the treaty,” he continued. “All in vain. The US pulled out of the treaty in 2002. Even after that we tried to develop constructive dialogue with the Americans. … All our proposals, absolutely all of them, were rejected.”

Putin overestimates the potential effectiveness of these U.S. missile defense systems, which have never proven reliable. But Russia’s generals, like ours, build their careers on exaggerating risks, and Putin, like most Russians, is easily awed by claims for U.S. technology.

As I wrote here in 2016, “The ABM system currently deployed in Europe is admittedly far too small today to threaten Russia’s nuclear deterrent. In fact, ABM technology is still unreliable, despite America’s investment of more than $100 billion in R&D. Nonetheless, it’s a threat Russia cannot ignore. No U.S. military strategist would sit still for long if Russia began ringing the United States with such systems.”

Some of his grandiose claims seem aimed less at convincing technical experts than at reassuring a domestic audience that Russia is still a great power and need not cower before superior American might.

For example, reports indicate that a nuclear-powered cruise missile, like one he described, crashed in recent tests, and experts say that the complex and expensive concept is inherently “insane.”

Similarly, if you just want to blow up some U.S. ports, it makes no sense to build a new class of nuclear drones capable of traveling thousands of miles underwater, when you could just deploy off-the-shelf nuclear missiles with cheap decoy warheads to foil U.S. defenses.

In an interview with Megyn Kelly on NBC, Putin himself admitted that only one of the weapons he referenced—a large but fairly traditional missile—was combat ready.

“We are not threatening anyone”

For all his boasting, Putin was simply making a point that most arms experts, and even the Pentagon, have long conceded: Russia has the means to defeat U.S. missile defenses, not to prevail in a war.

“We are not threatening anyone, not going to attack anyone or take away anything from anyone with the threat of weapons,” he said.

In case anyone still misjudged his intent, he added, “There is no need to create more threats to the world. Instead, let us sit down at the negotiating table and devise together a new and relevant system of international security and sustainable development for human civilization.”

Most of these caveats, of course went unquoted in Western news accounts. Instead, traditionally hostile reporters like Neil MacFarquhar and David Sanger of the New York Times said Putin had “essentially” declared that Russia “had made America’s response obsolete”—slippery language suggesting that U.S. security might be at risk.

In fact, nothing in Putin’s statement even hinted that the U.S. nuclear deterrent, backed up by 4,000 city-busting warheads, was in question.

It takes a lot less than that to deter a nuclear attack. China has just a few hundred warheads, but no one would ever think of messing with it. Indeed, no rational leader—a category that may or may not include President Trump—would even think of launching a nuclear attack on North Korea, with its few dozen primitive warheads.

The assessment of Lt. General James Kowalski, Vice Commander of the U.S. Strategic Command, remains true today as it was in 2013: a Russian nuclear attack on the United States is such “a remote possibility” that it is “hardly worth discussing.”

But America’s neo-Cold Warriors instantly seized on Putin’s speech to whip up anti-Russia frenzy and call for even more military spending.

President Obama’s former ambassador to Moscow, Michael McFaul, insisted that President Trump was derelict for not responding forcefully to “Putin’s speech today threatening to attack America in new ways with nuclear weapons.” The lack of push back, he said, was “Amazing. Disappointing. And scary.”

More amazing, disappointing, and scary was the former ambassador’s utter mischaracterization of Putin’s speech. One hopes that his reporting to the State Department was not so casually in error.

And then the was the oft-quoted Adm. James Stavridis, former Supreme Allied Commander of NATO, who asserted that Putin’s speech “illuminates his ‘go big’ strategy for dealing with the U.S., including an aggressive stance backed up by destabilizing weapons.”

“It should spur us to develop counters to what he is describing,” he declared. “We need to do the research and development, testing, fielding and training to deal with the new battlefield he is describing, with both offensive and defensive capabilities.”

Such language reinforces the Pentagon’s ambitious agenda, outlined in its recent “Nuclear Posture Review,” which calls for creating at least two new kinds of nuclear weapons while pursuing a $1.7 trillion program of “modernizing” America’s nuclear arsenal.

Even more extreme, Rob Dannenberg, former chief of the CIA’s Central Eurasia Division, concluded that “Putin may have stolen a march on us as we have underinvested in strategic weapons for at least the past decade.”

If anything should keep us up at night worrying about the fate of the world, it’s nuts like Dannenberg, calling for regime change in Russia—not Putin’s cartoon videos about how Russia plans to maintain a stable nuclear deterrent with the United States.

Jonathan Marshall is the author of many articles on nuclear arms and policy, including “Learning to Love — and Use — the Bomb,” “Dreams of ‘Winning’ Nuclear War on Russia,” “Obama’s Unkept Promise on Nuclear War,” “Endangering a Landmark Nuclear Treaty.”

← All Fire and Fury in Ukraine
How ‘Operation Merlin’ Poisoned U.S. Intelligence on Iran →