Exclusive: The Russiagate narrative has taken a turn toward the surreal with a report in the New York Times alleging that U.S. spies paid a “shadowy Russian” $100,000 for dirt on the president, explains Daniel Lazare.

A Russian national with ties to cybercrime and Russian intelligence snookered U.S. spooks out of $100,000 by promising them fresh dirt on Donald Trump. 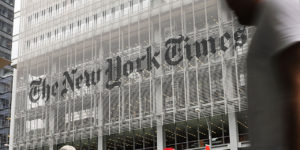 That’s the takeaway from a strange front-page article that ran in last weekend’s New York Times, “U.S. Spies, Seeking to Retrieve Cyberweapons, Paid Russian Peddling Trump Secrets.” That’s not all the article said, but the rest was so convoluted and implausible that it can be safely discounted.

Even Matthew Rosenberg, the Times reporter who wrote the story, described it as “a really weird one” in an interview with Slate. More than merely weird, however, the piece offers valuable insight into the parallel universe that is Russiagate, one in which logic is absent, neo-McCarthyism is rampant, and evidence means whatever the corporate press wants it to mean.

The article says that the U.S. spies were seeking cyberweapons stolen from the National Security Agency by a group calling itself the Shadow Brokers in 2016, but that a “shadowy Russian” kept pushing instead evidence buttressing the “golden showers” episode in the Christopher Steele dossier. The spooks were not interested because they didn’t want to soil their hands with “the stuff of tabloid gossip pages” and because they feared that the Russian was trying to drive a wedge between the intelligence agencies and the White House.  As the article puts it:

“The United States intelligence officials … were wary of being entangled in a Russian operation to create discord inside the American government.  They were also fearful of political fallout in Washington if they were seen to be buying scurrilous information on the president.”

But Rosenberg’s account raises a number of questions. One is why the spooks were “desperately” trying to retrieve stolen NSA hacking tools in the first place when, as cyber-security experts have warned, stolen malware is essentially irretrievable for the simple reason that it can be copied endlessly in an instant.  Once a secret is out, the damage is done – there’s no getting it back.

Another concerns why U.S. agents would continue taking “multiple deliveries” of anti-Trump data beginning last October that “they made clear that they did not want.”  Was the Russian unusually insistent? Or were the Americans less adamant than Rosenberg would have us believe?

Indeed, the article says that “at least four Russians with espionage and underworld connections have appeared in Central and Eastern Europe, offering to sell kompromat [i.e. compromising material] to American political operatives, private investigators and spies that would corroborate the [Steele] dossier.”  So it seems that demand for kompromat is as strong as it was in October 2016 when former FBI Director James Comey used the same unsubstantiated gossip to obtain a secret warrant to eavesdrop on an ex-Trump campaign aide named Carter Page.

Since the story about buying back malware doesn’t make sense, could it be that kompromat is what the Americans were seeking all along? This is not the sort of thing that Trump would like to hear. The article says that Russia is out to spread material that will “cast doubt on the federal and congressional investigations into the Russian meddling” even though kompromat buttressing the Steele dossier would do the opposite. It says that the negotiations “ended this year with American spies chasing the Russian out of Western Europe, warning him not to return if he valued his freedom,” and that the anti-Trump material remains in the hands of an American go-between “who has secured it in Europe.”

Which raises more questions still.  Can U.S. spies really lock up anyone they wish?  And where, precisely, did the American stash the kompromat – and to what end? Rosenberg indicates that he also interviewed the purported Russian agent. But nowhere do we get his side of the story concerning what the Americans were really after.

The results are incoherent even by Times standards. One reason may be that Rosenberg dashed the story off at breakneck speed after long-time intelligence writer and former Times-man James Risen published a similar piece a few hours earlier in The Intercept.  But another is that the Russiagate narrative that the Times is pushing is itself incoherent and that Rosenberg is guilty of nothing more than toeing the company line.

He let the cat out of the bag in the Slate interview, which ran shortly after the story appeared on the Times website:

“Spy games happen all the time, but you need a confluence of circumstances [for this]: You need an election with Russian interference. You then need a president to win and deny interference ever happened and say there is no collusion. You need the Russians to say, ‘Oh, wow, let’s take advantage of this. This really worked out. Let’s make it worse and start selling this stuff off.’”

Rosenberg continued: “What the Russians were committed to – what we really know – is that they were committed to messing with American democracy. … If their goal here is messing with American democracy, then getting some of this stuff out on Donald Trump, if it’s real, that’s worse, weakens him further, intensifies the political mess we are in. So there are reasons to do that. Plus, if you can get this into American consciousness through American spy agencies or law enforcement, you will have set off the White House versus its own spies in a way that if you are a Russian spy, that’s great. Disorder and dissension in the ranks of your enemies.”

This is a reporter’s mind on drugs, specifically the drug of boundless anti-Russian paranoia. But no matter how often the Times assures its readers that the Russians are out to get us, that they’re messing with our democracy, that they sow “disorder and dissension” wherever they can because that’s what Russians do – actual evidence, the stuff that sober minds require before making a judgment, remains remarkably thin.

Take Russian manipulation of social media, the subject of last November’s bizarre Moscow-style “show trial” in which attorneys for Facebook, Twitter, and Google were hauled before a congressional panel to confess their sins in allowing the Kremlin to use their platforms to subvert the state.  But the subversive Facebook ads that the alleged Kremlin-linked St. Petersburg “troll factory” known as the Internet Research Agency purchased added up to just $46,000 worth by Election Day, a drop in the bucket compared to the $81 million spent by the Trump and Clinton campaigns.

Politically, moreover, the ads were all over the map, some leaning right, some leaning left, and in one case, a page featuring photos of cute puppies, leaning in no apparent direction at all. Last September, The Atlantic tried to figure out what the Internet Research Agency was up to.  But after some 1,200 words of huffing and puffing, the best the magazine could come up with was that the ad campaign “was too small to seriously influence the election, but too big to be an afterthought.”

In other words, no one knows.  In a rare moment of journalistic sanity, Washington Post reporter Philip Bump observed that the ad buys were “often modest, heavily dissociated from the campaign itself and minute in the context of election social media efforts.”

As for Twitter, Bump notes that the 2,700-plus accounts believed to be Russian-linked generated just 202,000 tweets between January 2011 and August 2017, a no-less-negligible sum next to the one billion election-related tweets sent out during the fourteen months prior to Election Day.

Even if all this shows the secret hand of the Kremlin at work, the effort pales in comparison to that of Israel (AIPAC, the American Israel Public Affairs Committee, is among the most powerful lobbies in Washington); the Arab gulf states (which finance virtually every major think tank in DC); Ukraine (which has proved surprisingly effective in swinging official opinion), and so forth.

It barely merits a four-graph story on page A16.  Then there is the alleged Kremlin hack of the Democratic National Committee, the ur-crime that triggered the anti-Russian storm in the first place.

The January 2017 formal assessment by Director of National Intelligence James Clapper contained nothing by way of evidence that a break-in had occurred or that Russian intelligence was responsible. (WikiLeaks, the recipient of the purloined emails, continues to insist that it was an inside leak.)  Even the Times conceded that the report was “unlikely to convince skeptics.”

Since the FBI never inspected the DNC’s computers first-hand, the only evidence comes from an Irvine, California, cyber-security firm known as CrowdStrike whose chief technical officer, Dmitri Alperovitch, a well-known Putin-phobe, is a fellow at the Atlantic Council, a Washington think tank that is also vehemently anti-Russian as well as a close Hillary Clinton ally.

Thus, Putin-basher Clinton hired Putin-basher Alperovitch to investigate an alleged electronic heist, and to absolutely no one’s surprise, his company concluded that guilty party was … Vladimir Putin. Amazing! Since then, a small army of internet critics has chipped away at CrowdStrike for praising the hackers as among the best in the business yet declaring in the same breath that they gave themselves away by uploading a document in the name of “Felix Edmundovich,” i.e. Felix E. Dzerzhinsky, founder of the Soviet secret police.

As noted cyber-security expert Jeffrey Carr observed with regard to Russia’s two main intelligence agencies: “Raise your hand if you think that a GRU or FSB officer would add Iron Felix’s name to the metadata of a stolen document before he released it to the world while pretending to be a Romanian hacker.  Someone clearly had a wicked sense of humor.”

None of this proves that Russian intelligence didn’t hack the DNC, merely that a lot more evidence is needed before accepting the word of professional CIA disinformation experts. But the Times lives in an evidence-free world in which Russians are guilty regardless of what they do. Whether they’re pro-Trump or anti, out to discredit the Mueller investigation or bolster it, the only thing that matters is that they’re intent on sowing discord – and that U.S. intelligence agencies are blameless upholders of the rule of law.

“Throughout the entire [intelligence] community,” declared Coats, “we have not seen any evidence of any significant change from last year” – which, loosely translated, means that evidence that Russia is on the warpath is as sparse today as it was previously.  Since “President Trump continues to refuse to even acknowledge the malevolent Russian role,” a Times editorial concluded, the possibility that “he is giving Russia a green light to tamper with the 2018 elections … can no longer be dismissed out of hand.”

All that was needed was for Editorial Page Editor James Bennet to hold up a list of 205 known Communists toiling away in the State Department. Trump is a reactionary, a con man, a bully, and much else besides. But with remarkable accuracy, liberals are obsessively zeroing in on the one thing he’s not: a Russian agent.