An interview by Dennis J. Bernstein with writer, activist and regional expert, Kay Jay Noh, about the big-power politics swirling around the Olympic Games now being held in South Korea.

By many accounts, the Koreans – North and South – have prevailed over the disruptive desires of the United States, coming together in a series of very public actions, clearly meant to turn down the political heat generated by President Donald Trump and the U.S. pressure for military action. This pressure can be seen as a continuation of President Barack Obama’s “Asia Pivot,” a policy that called for full U.S. dominance in the region, including by containing China and the new emerging regional powers through a set of expansive, coordinated, and aggressive military alliances with Japan and other Pacific Rim countries. 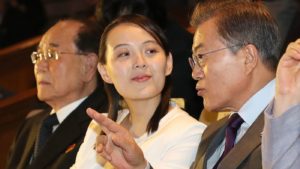 The high-profile actions taken by the North and the South – both acting independently of Washington – left U.S. Vice President Mike Pence pouting and twiddling his thumbs on the sidelines during some very effective international diplomacy. In this regard, there does indeed seem to be a new and genuine desire on the part of the president of South Korea to forge a more peaceful and cooperative relationship with the North, even though U.S. officials and commentators seem to be dead set against it, portraying the warming relations between North and South as an attempt by the North to subvert the long and close relationship with the South.

In congressional hearings this week, the moves toward North-South de-escalation were dismissed by a leading Republican, Sen. James Risch of Idaho, as a “smile campaign.”

Meanwhile, on the media front, CBS reported that its rival network NBC “was forced to fire one of its Olympic analysts after he inexplicably said Koreans are grateful for Japan’s role in their economic development – while ignoring the one-time imperial power’s brutalization of the peninsula.”

I spoke to writer and regional expert, Kay Jay Noh, about the Olympics and the big-power politics swirling around the Olympic Games in Seoul. Noh is a special correspondent for Flashpoints show on Pacifica Radio.

Dennis Bernstein: Welcome back Kay Jay Noh. We want to get to some of the bigger political issues but let’s start with a media story. We’ve heard that NBC fired one of its analysts because it turned out he didn’t have a clue about Korean history and ended up insulting Koreans while trying to somehow curry favor with Japan.

Kay Jay Noh: This commentator, Joshua Cooper Ramo, is the Co-CEO of Kissinger Associates and a supposed expert on the geopolitics and culture of Asia.  The history is that Korea was brutally colonized and subjugated by Japan for three and a half decades.  As the Japanese athletes were coming in, Ramo said “Now representing Japan, a country which occupied Korea from 1910 to 1945.  But every Korean will tell you,” he went on to say, “that as a technical, cultural and economic example, Japan has been so important to the transformation of Korea.”

This didn’t go over well with Koreans.  As one Korean put it, “After decades of human rights violations, exploiting our resources and attempting to destroy our heritage, Japan is not in a position to expect our gratitude.”  This is just one example of the extraordinary ignorance surrounding Korea, by so-called “experts.”

DB: What do you think was the significance in terms of diplomacy between the North and the South?  You have the United States swearing up and down that this is a ploy by the North to get in the way of our tight relationship with the South Koreans.

KJN: As you know, the Winter Olympics are usually not as well attended as the summer games and not as much a source of interest for the general global audience.  But these Olympics, held in the South Korean county of PyeongChang, have reached out to the North Koreans.  And the North Koreans have responded.

In fact, they responded very rapidly, sending over 500 of their citizens, including a cheerleading squad, an orchestra, a Taekwondo demo team, the head of the North Korean assembly, 22 athletes, and most surprisingly, Kim Yo Jong.  Kim Yo Jong is a  high-ranking politburo member, and Kim Jong Un’s younger sister.  Just the fact of the North Koreans defying expectations and showing up was a propaganda coup.

The allegation was that the North Koreans were going to use the Olympics as a propaganda offensive. Actually, that battle was lost before it even started, because so much of the Western media has gone overboard to portray the North Koreans as brainwashed zombies or belligerent monsters.  So when these representatives of North Korea show up and they are not cowed zombies or desperate monsters, but rather vivacious, congenial, and self-possessed women, that shattered a lot of received stereotypes.

DB: It does seem that there is a strong spiritual push by the new leadership in the south to bring the two countries together.  There have been some pretty warm words, haven’t there?

KJN: Absolutely. To give some more background, although technically North Korea and the US are still at war, North Korea and South Korea signed a Treaty of Reconciliation, Cooperation, and Non-aggression in 1992.  The letter of that agreement has not always been observed and, especially during conservative administrations, the hostilities have escalated.  But the current president of South Korea, Moon Jae In, was the chief of staff of Roh Moo Hyun, who headed a progressive administration and worked very actively toward reconciliation with the North in a program known as the “Sunshine Policy.”

To a certain extent, this small break in the clouds is an attempt to return to that policy of reconciliation.  What is notable is the congeniality with which the hand was extended toward North Korea.  For example, when the North Korean and South Korean athletes entered the stadium as one team, under a single flag, a standing ovation erupted as 35,000 people rose to their feet in a celebration of this very powerful coming together.

DB: Just watching on my TV, I was totally moved.

KJN: The other thing that was notable was that Vice President Pence was the only person who did not stand up. Here’s a man who criticized African American football players for “taking the knee” and has said that sports should not be politicized.  An American writer in the centrist Korean Times described Pence’s gesture as “mean-spirited and stupid arrogance, making America look bad in the eyes of the world.”  Professor Alexis Dudden at the University of Connecticut, called it “a new low in American bullying.”

DB: These Olympics come in the context of some pretty crazy policy on the part of the United States government.  The permanent war government wants this kind of policy because it helps the weapons industry.  Can these meetings at the Olympics mean anything in this context?

KJN: It’s hard to say right now.  There seems to have been a bit of an about-face on the part of Pence, some have said because the enormous criticism he has received.  He has now said that he is willing meet and talk with the North Koreans without preconditions. At the same time, he has said that he intends to maintain maximal pressure and that there are even more extreme sanctions in the pipeline.  Meanwhile, South Korean President Moon met with the sister of Kim Jong Un on four occasions over three days, including a performance by the North Korean Orchestra. During a state luncheon, Kim Yo Jong extended an invitation to President Moon from Kim Jong Un to visit North Korea for a summit meeting “at the earliest date possible.”

In the visitor’s book, she wrote:  “I hope Pyongyang and Seoul get closer in people’s hearts and move forward for the future of a mutually prosperous unification.”