Despite an organized and active grassroots movement, Honduran politics have been repeatedly steamrolled by the self-interests of international ruling elites, as journalist and filmmaker Jesse Freeston explained to Dennis J. Bernstein.

For weeks following its stolen election, the corrupt right-wing, neo-fascist government of Juan Orlando Hernández’s in Honduras has been terrorizing its people. Street protests and spontaneous blockades have been met by extreme violence. Dozens have already died on the frontlines and many more have been arrested and brutalized in detention, while often being held incommunicado.

I spoke to Jesse Freeston, who has been based in Honduras for the last eight years working as a video-journalist and documentary filmmaker, ever since the US supported/Hillary Clinton sustained 2009 coup d’état that purged the duly elected president, Manuel Zelaya. Freeston, who has reported for the Real News Network and Democracy Now en Espanol, is the producer of the feature documentary “Resistencia: The Fight for the Aguan Valley.”

Freeston reports that, among other crimes against the people, “this regime has: stolen an election; ignored calls from the Organization of American States to hold a new election; passed a law prohibiting the prosecution of all former and current members of Congress in the midst of a series of massive corruption scandals [and has] appointed a new national police chief who has clear evidence against him of drug trafficking…”

I spoke to Freeston on February 7.

Dennis Bernstein: We continue our drumbeat coverage of Honduras and the recent stolen election there, an attempt to suppress the will of the people who, by all accounts, want to have a more progressive government.  It has been a very violent situation since the election.  We are hearing that dozens of people have been killed and that the atrocities being perpetrated by the government have resulted in a nightmare. Could you put this in the context of the last two recent election cycles in Honduras?

Jesse Freeston: On June 28, 2009, there was a vote on a non-binding resolution put forward by President Manuel Zelaya, who had taken up the call of various indigenous groups in the country to rewrite the constitution.  When people went out to vote on that day, the military staged a coup d’etat and Zelaya wound up in Costa Rica.

This led to the most organized national resistance movement Honduras has ever seen.  Assemblies were held, which brought together all these people who stood to gain from a new constitution.  Just about every sector of the society were represented, except perhaps the oligarchy.

This led to the formation of the Libre Party, which participated in the 2013 elections [with Manuel Zelaya’s wife, Xiomara Castro, running as the party’s presidential candidate].  The election was officially won by Juan Orlando Hernandez but there was massive fraud.  The November, 2017 elections were even more of a farce.

Despite all that, when the electoral tribunal released its first results, the Oppositional Alliance were up by 5% with 60% of the votes counted.  One of the magistrates on the tribunal described it at the time as an “irreversible trend.”  Then, counting stopped for over a day when the computer system supposedly crashed.  When it was back up again, the tendency had completely flipped and Hernandez ended up winning by one percentage point.

This led to another massive uprising.  On one day of action there were 48 blockades of highways and major boulevards in the country.  During the last two months, this has been happening a couple times a week.

Even international observers such as the European Union Commission and the Organization of American States–who have been discredited here after turning their back many times in the last eight years to the crimes of this regime–even they have said that they have to redo the election or there has to be a recount.

Nevertheless, the members of those organizations, like Canada, like the United States and the countries of the European Union, went ahead and validated the election.

DB: We have heard that activists and members of the resistance have been arrested.

JF: Yes, there are dozens of political prisoners behind bars right now.  One of the most worrying cases is that of Edwin Espinal.  He is someone who has consistently paid a price for his resistance against the ongoing coup d’etat.

In September of 2009, Edwin Espinal’s wife died from tear gas inhalation after taking part in several protests.  A week later, Edwin was at a small neighborhood protest after which he was arrested for kidnapping because he took a child with him on his motorcycle when he was fleeing the tear gas.  The mother of the child went over and over to the police station to explain that she had pleaded with Edwin to take her kid with him.  Another time he was jailed for car theft for driving a friend’s car.

The first thing that the newly-formed military-trained urban police force did was raid Espinal’s house, claiming they had proof that he was a drug trafficker. The police falsely accused him of being involved in the Marriot Hotel fire and right now he is in a maximum security prison on that charge. Journalists and human rights workers are not allowed in to talk to him, his family have not been allowed to see him.  This is the first time since the 1980’s that a civilian will be tried inside a military base.

DB: How would you describe the US role in this situation?  We know that Hillary Clinton played a key role in sustaining the coup in 2009.

JF: I think that informed people in Honduras realize that changes in political leadership in the US don’t make much difference in how Honduras is treated.  Decisions are made here at the US Embassy and ambassadors act as de-facto rulers here, as shadow presidents. 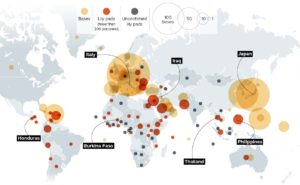 Known locations of U.S. military bases around the world

The one constant here is the massive military funding from the US.  Since the coup, the Honduran military has received more direct funding from the US than any other country in the Americas, despite the fact that they have not been involved in a single military conflict or been threatened with one.

The military is purely used against people inside the country.  Although the United States is by far the largest funder of the Honduran military, other countries are also involved because humanitarian and other aid is typically diverted to the military.

DB: You said that there is a continuity between the last administration’s policy toward Honduras and the Trump administration’s policy.  In terms of so-called US interests, the real problem is that we push a program of “free trade” and we insist on having our military bases there.  So we have every reason to sustain the government as long as it provides us with an opportunity to police the region.  Could you talk about the geopolitical part of this?

JF: I think the more a country depends on its natural resources, the more everything comes down to who controls the land.  In 1961, [John F.] Kennedy launched a program called The Alliance for Progress, which was billed as a kind of Marshall Plan for Latin America.  It was a response to the Cuban revolution and an attempt to ward off similar revolutions across Latin America.

We were going to give billions of dollars to countries in Latin America if they promised to undertake land reform, if the oligarchy agreed to give up a portion of their land.  When Johnson replaced Kennedy there was much less priority assigned to this program.  Nonetheless, the Honduran government had to pass a number of land reform laws to receive the money, but none of those laws were ever implemented.

If the US intends to keep its business interests here alive–the sweatshop sector as well as bananas and palm oil–and for Canada, gold mining primarily–they need to maintain their alliance with this land-holding oligarchy.   It is this alliance that the resistance is asking the countries of the North and the West to break.

With eight and a half years of organizing experience, the people of Honduras could put together a government so fast it would make your head spin.  This movement is very organized.  They know who to trust, they know who can provide intellectual support, they know who can run the economy.  They are just waiting for the international community to change its alliances.

DB: So will the resistance to the Hernandez regime go on?

JF: The Oppositional Alliance has decided to wage a “peaceful insurrection,” something they are entitled to do under the Honduran constitution, which states that no one owes obedience to a government which takes power by force.  The numbers now at the protests have been considerably less than in the past two months, particularly since the inauguration on January 27.

It is hard to predict what will happen but the vast majority of the population do not want this regime.  There is a massive corruption scandal developing and we will see what happens with that.  Students are planning a strike for next month. But we will have to wait to see what kinds of ideas are going to be put forward in Honduras.

People are looking at Honduras as a laboratory for the ultra-right of the world.  Fortunately, there is a well-organized movement here that will be rising up again and again.  It is up to those of us in the international community to put pressure on those who claim to represent us to change their allegiances.

DB: Would you say that this is a movement inspired by young people in the country?

JF: Yes, and that is the key to understanding this new law that the National Party is trying to pass which would regulate social media.  It has to do with this young generation that has grown up in this period following the coup.  Someone like Zelaya doesn’t necessarily reach them.  This new law the government is trying to pass would give them the right to criminalize anyone posting anything they deem “hateful” on social media.  And this is a government that labels “racist” people who are defending rivers from dams being built.

← Regime Change Fails: Is A Military Coup or Invasion of Venezuela Next?
Iraq’s ‘Liberation Day’ →