“Gaslighting” can be an effective tactic to instill confusion and anxiety in people, causing them to doubt their own logical abilities, but it can be countered by remaining confident in our judgments, argues Caitlin Johnstone. 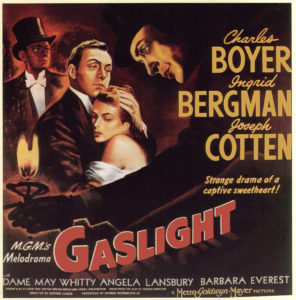 The dynamics of the establishment Syria narrative are hilarious if you take a step back and think about them. I mean, the Western empire is now openly admitting to having funded actual, literal terrorist groups in that country, and yet they’re still cranking out propaganda pieces about what is happening there and sincerely expecting us to believe them. It’s adorable, really; like a little kid covered in chocolate telling his mom he doesn’t know what happened to all the cake frosting.

Or at least it would be adorable if it weren’t directly facilitating the slaughter of hundreds of thousands of people.

I recently had a pleasant and professional exchange with the Atlantic Council’s neoconservative propagandist Eliot Higgins, in which he referred to independent investigative journalist Vanessa Beeley as “bonkers” and myself as “crazy,” and I called him a despicable bloodsucking ghoul. I am not especially fond of Mr. Higgins.

You see this theme repeated again and again and again in Higgins’ work; the U.S.-centralized power establishment which facilitated terrorist factions in Syria is the infallible heroic Good Guy on the scene, and anyone who doesn’t agree is a mentally deranged lunatic.

This is also the model for the greater imperialist propaganda construct, not just with regard to Syria but with Russia, North Korea, Iran, and any other insolent government which refuses to bow to American supremacist agendas.

It works like this: first, the oligarch-owned establishment media, which itself is chock full of Council on Foreign Relations members, uses other warmongering think tanks and its own massive funding to force deep state psy-ops like Russiagate and Iraqi WMDs into becoming the mainstream narrative. Second, they use the mainstream, widely accepted status of this manufactured narrative to paint anyone who questions it as a mentally defective tinfoil hat-wearing conspiracy theorist.

It’s a perfect scheme. The mass media has given a few elites the ability to effectively turn a false story that they themselves invented into an established fact so broadly accepted that anyone who doubts it can be painted in the exact same light as someone who doubts the roundness of the Earth. The illusion of unanimous agreement is so complete that blatant establishment psy-ops are placed on the same level as settled scientific fact, even though it’s made of little else but highly paid pundits making authoritative assertions in confident tones of voice day after day.

Yes, it is a perfect scheme. But there also happens to be a name for it.

“The psychological term ‘Gaslighting’ comes from a 1944 Hollywood classic movie called ‘Gaslight.’ Gaslighting describes the abuse employed by a narcissist to instill in their victim’s mind, an extreme anxiety and confusion to the extent where they no longer have faith in their own powers of logic, reason and judgement. These gaslighting techniques were adopted by central intelligence agencies in the U.S. and Europe as part of their psychological warfare methods, used primarily during torture or interrogation.”

Anyone who has been in an abusive relationship is likely to be familiar with this textbook abuse tactic to some extent, because it is such a useful tool for crippling the better judgment and alarm bells we all have which are meant to help us avoid situations that are harmful to us.

If someone with confidence in their own clear judgment feels certain that their significant other is cheating, for example, there is likely to be a confrontation and some clothes out on the front lawn. If your significant other can convince you that you are paranoid or crazy, however, you will doubt what you are seeing and accept the stories you’re being told by someone who appears to be a lot more grounded in reality than you are.

Any degree of abuse can be justified in this way. The documentary “What Happened, Miss Simone?” tells an anecdote of jazz legend Nina Simone once having been tied up, raped, beaten and held at gunpoint by her husband, who left and then returned telling her she’d imagined the entire thing. And it worked.

We see the same thing today with the establishment Syria narrative and the Russiagate psy-op, which are both riddled with plot holes and depend on the irrational position that the same establishment which manufactured support for the Iraq invasion using lies is now beneficent and trustworthy. But if you point out the many reasons to be skeptical of these narratives, you belong in the crazy box.

The good news is that there is an easy remedy for this tactic. We need only to be thoroughly confident in our own judgment.

History has testified unequivocally that extreme skepticism is the only rational response to have toward establishment narratives, especially when those narratives are beating the drums of war. The U.S. war machine has an extensive history of using lies, false flags and propaganda to manufacture support for its bloodthirsty agendas, and the adage that truth is the first casualty of war holds up flawlessly in cases of both hot war and cold war. It is simply self-evident that there is no good reason to take these people at their word, and every reason not to.

Your own educated best guess about what is going on in the world is infinitely superior to placing unquestioning faith in an establishment which has a vested interest in lying to you and a demonstrable history of doing so. Trust yourself and have full confidence that your conclusions, however imperfect, are always superior to those of known liars and manipulators.

Never, ever let anyone bully and cajole you for being skeptical of mainstream narratives instead of believing the say-so of malignant deceivers. Trust yourself. You are not being crazy, you are behaving logically. Don’t let them gaslight you.

225 comments for “How Establishment Propaganda Gaslights Us Into Submission”