A recent false alarm in Hawaii had citizens in a state of panic over an impending nuclear attack, which, as Ann Wright speculates, may have been the point. 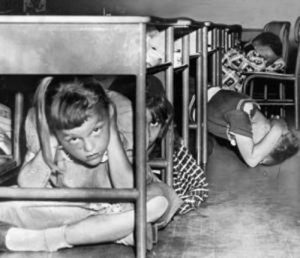 You know what happened – an employee of the State of Hawaii Emergency Management Department pushed the wrong button, setting off the siren, and no one alerted the public for nearly 49 minutes that it was a drill. Cell phone alerts to everyone in the 808 area code flashed “Nuclear attack warning-take cover,” with residents and tourists alike going into crisis mode.

Three days prior to the false alarm, 20 of us attempted to call to the attention of the state government that the sirens are being used for political advancement of a hysteria for war with North Korea, or DPRK – the Democratic People’s Republic of Korea. We do not believe the North Korean government is going to attack the United States and suspect that the nuclear sirens and “duck and cover” drills are purposeful and dangerous fear-mongering.

The sirens heighten the anxiety and stress of impending conflict and devastation, making citizens afraid – and in their fear, more likely to accept whatever line the government feeds them on threats and counter-measures.

Successive administrations have lied our country into wars – from Vietnam to Iraq. We do not agree for the need for war with North Korea and refuse to accept the attempted U.S. intimidation of the DPRK, which could lead to war. The sirens, much like the steady barrage of “orange alert” terror warnings in 2002-2003 that preceded the U.S. invasion of Iraq, normalize the potential for war.

Certainly, if the U.S. initiates military action against North Korea, militarized Hawaii with its four major military bases on Oahu – the headquarters of the U.S. military Pacific Command that covers half the world, the Army’s 25th Infantry Division at Schofield Barracks, Marine Expeditionary Force at Kaneohe, Hickam Air Force Base and Pearl Harbor Navy Base, the huge NSA underground listening station near Wahaiwa, the massive practice bombing area called Pohakuloa, on the Big Island and the Pacific Missile Range on Kauai – would be a likely retaliatory target for North Korea or any other nation threatened by the United States.

Therefore, it is in Hawaii’s survival interest that we demand that the U.S. government resolve issues with North Korea in a nonviolent manner.

The national government in Washington, DC, does not feel the need to have nuclear warning sirens, so why should Hawaii? One would think the politicians who make the decisions for war and the Pentagon would be bigger targets than Hawaii.

We held our protest outside the State Capitol and got media coverage, but the siren program continued – until the false alert siren went off. However, after the mistaken alert fiasco, the governor has suspended the siren warnings. 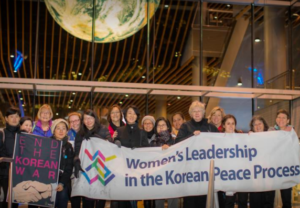 As this was going on in Hawaii, I joined a 16-woman delegation from five countries who participated in a Civil Society Round Table held in Vancouver, British Columbia, Canada sponsored by the government of Canada and in a public forum on security and stability on the Korean peninsula in conjunction with the meeting of the foreign ministers of twenty countries of the U.S.- led Korean command.

Some of our delegates had long collective experience engaging with North Koreans through citizen diplomacy and humanitarian initiatives and others had expertise on militarism, nuclear disarmament, economic sanctions and the human cost of the unresolved Korean War.

Instead of approving of the warmongering of the Trump administration, our delegation’s recommendations to the meeting of foreign ministers appealed for sanity in dealing with the North Korean government:

2) A pledge not to conduct a first strike, nuclear or conventional, and

3) A process to replace the Armistice Agreement with a Korea Peace Agreement; 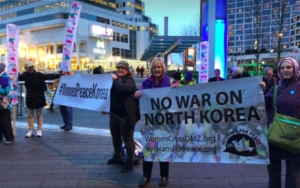 Despite our best efforts at the Civil Society Round Table and individual meeting with the U.S. and Canadian delegations, the foreign ministers chose to continue the “maximum pressure” strategy on the DPRK through rigorous enforcement of UN sanctions and a underscoring that a nuclear-armed North Korea would never be accepted.

Our delegation responded that the foreign ministers had chosen to further isolate and threaten Pyongyang, a strategy that had utterly failed to halt North Korea’s nuclear and missile program and had only furthered the DPRK’s resolve to develop its nuclear arsenal.  We know that the sanctions that have been imposed have cruel and punishing effects on ordinary North Koreans and are considered by North Korea as warfare-economic warfare, just as military war preparations (games) are considered as pre-invasion and regime overthrow warfare.

We are profoundly disappointed by the foreign ministers who represent countries with a commitment to peaceful diplomacy and feminist foreign policies.  At a time of great global instability, we looked to them for leadership for true global peace and security, but found instead continuation of threats, isolation and economic and military warfare.

At the state level, we hope that the government of Hawaii will discontinue its monthly (and accidental?) siren and cell phone fear-mongering and requiring schools to show “duck and cover” videos that are conditioning the public for war and increased military spending, instead of the less expensive and more successful strategy – dialogue!

Ann Wright served 29 years in the U.S. Army-Army Reserve and retired as an Army Reserve Colonel. She served 16 years as a U.S. diplomat in U.S. Embassies in Nicaragua, Grenada, Somalia, Uzbekistan, Kyrgyzstan, Sierra Leone, Micronesia, Afghanistan and Mongolia.  She was on the first team to reopen the US Embassy in Afghanistan in December 2001.  She resigned from the U.S. government in March 2003 in opposition to the war on Iraq. She lives in Honolulu.