A new draft law adopted by the Ukrainian Parliament and awaiting Petro Poroshenko’s signature threatens to escalate the Ukrainian conflict into a full-blown war, pitting nuclear-armed Russia against the United States and NATO, reports Gilbert Doctorow.

While much of America’s – and the world’s – attention focused this weekend reflecting on Donald Trump’s first year in the Oval Office, holding one-year anniversary events for the historic Women’s March and drawing up balance sheets of his promises and achievements, Russia has had a rather different issue on the front-burner: a possible war with Ukraine. 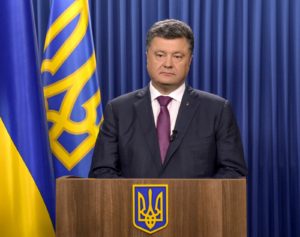 The situation in the Donbass region of south-eastern Ukraine has been a feature of Russia’s political talk shows for the past couple years, along with the military campaign in Syria and more recently the stages in the preparation for presidential elections on March 18.

Focus on the Donbass conflict increased in the closing weeks of 2017 as military action on the front lines separating the forces of the self-proclaimed republics of Donetsk and Lugansk enjoying Russian support from Ukrainian militias and armed forces reached an intensity not seen for more than a year. This is despite the heralded exchange of military prisoners by both sides before New Year’s under talks supervised by the Patriarch of the Russian Orthodox Church Kirill.

Then, this past Thursday came a wholly new development – a draft law passed by the Ukrainian Parliament that could effectively end Kiev’s participation in the conflict resolution process known as the Minsk Accords. Although observers in the United States and Western Europe may have missed it, many Russians believe this development amounts to a declaration of war.

According to Kiselyov, the new law, which awaits Poroshenko’s signature, makes preparations for war and includes language indicating a bellicose new approach to the conflict. The mission in Donbass is no longer described as an “anti-terrorist operation.” Rather, the mission now is to send armed forces against “military formations of the Russian Federation” in Donbass.

Military headquarters are established to coordinate the operation to be waged in Donbass. While up until now the self-declared republics of Donetsk and Lugansk were considered under the Minsk Accords as negotiating parties, now there are only “occupation administrations” of the Russian Federation on these territories, with Russia identified as an “aggressor.”

“This makes it all the more convenient for Ukraine to start a war,” Kiselyov says, noting that it could have the added benefit of enabling Ukraine not to pay its foreign debts and to ensure Poroshenko’s continued grip on power.

A Vesti reporter on the ground in Donetsk confirmed with local residents their view that the law means war. They see the current moment on the front line as “the calm before the storm.” Donetsk soldiers at their trenches say they are fully ready to engage with the enemy.

While Kiselyov acknowledges that the draft law might not ultimately be implemented, it nevertheless reveals a growing mood in the Ukrainian capital in favor of escalation. The facts speak for themselves, Kiselyov says, with Poroshenko failing to adhere to the Minsk Accords – for example by organizing local elections in Donbass – or to observe ceasefires along the lines of contact. There are attacks and deaths every day and only counter force have pushed back recent Ukrainian attempts to gain territory.

Kiev has seemingly written off the population of the two self-proclaimed republics – cutting off all transport and telecoms links and failing to pay pensions and assistance to the needy. It closed the banking system and there are no commercial ties. For Kiev the two provinces are merely territory to take back from the occupiers, with the wellbeing of the local populations at best a secondary concern.

On the economic front, the European Union has refused to extend 600 million euros of credit to Ukraine due to corruption. The International Monetary Fund recently refused a tranche of $800 million over failure to introduce reforms. Meanwhile, in 2019 Ukraine is due to start repaying earlier loans. This will come to $14 billion a year, which amounts to half the state budget of Ukraine.

Due to dire economic conditions, Poroshenko and other government officials in Kiev have become deeply unpopular, and with diminished chances for electoral success may see war as politically advantageous.

And although there are indications that some Western leaders are fed up with Kiev, the United States has doubled down in its support for a military solution to the conflict. With military trainers now on the ground and the U.S. budgeting $350 million for security assistance to Ukraine, Washington has also recently started delivering lethal weapons including the Javelin anti-tank missile system free of charge to Kiev.

In contrast to the image of Trump administration policies being dictated by Moscow, as portrayed by proponents of Russia-gate conspiracy theories, the United States is instead moving towards deeper confrontation with the Kremlin in the geopolitical hotspot of Ukraine.

For its part, the Kremlin has very little to gain and a great deal to lose economically and diplomatically from a campaign now against Kiev. If successful, as likely would be the case given the vast disparity in military potential of the two sides, it could easily become a Pyrrhic victory.

But notwithstanding Kiselyov’s reassuring words on his Sunday evening news wrap-up, it may well be the case that Moscow feels it has no choice. Moves by Kiev to exacerbate the conflict must be quickly countered to prevent deeper intervention by the United States and its NATO allies and prevent the conditions for WWIII from taking hold.

Gilbert Doctorow is an independent political analyst based in Brussels. His latest book, Does the United States Have a Future? was published in October 2017.

223 comments for “A Coming Russia-Ukraine War?”