Amid the U.S. mainstream media’s hyping of Russia-gate, there has been much less attention given to what some call “Israel-gate,” evidence that Israel was wielding much more behind-the-scenes influence, reports Dennis J Bernstein.

President Trump’s decision to begin moving the U.S. Embassy in Israel to the disputed city of Jerusalem — and disclosure that first-son-in-law Jared Kushner failed to disclose his role in a foundation funding Israeli settlements and lobbied against a United Nations’ resolution critical of those settlements during the transition — are reminders that the foreign government with truly broad influence over U.S. politics is Israel.

Trump’s Jerusalem announcement also threatened to touch off more disorder in the Middle East, which Ali Abunimah, co-founder of the Electronic Intifada, says reflected the Trump administration’s determination to demand a full capitulation by the Palestinians. I spoke with Abunimah on Dec. 5. 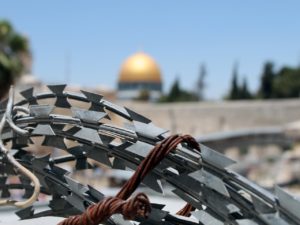 One of Islam’s holiest sites the Dome of the Rock in Jerusalem, seen through barbed wire.

Dennis Bernstein: We turn our attention back to occupied Palestine.  We have now seen the kind of policy we are going to get from the Trump administration.  Jared Kushner has described bringing peace to the region as his dream.  We are going to talk about that in the context of his investment in settlements there. I suppose the central issue in Palestine this week is whether the embassy is going to be moved from Tel Aviv to Jerusalem and what will the timing be, as in, will it happen some time soon?

Ali Abunimah: Actually, it will not be moved any time soon.  Trump will announce tomorrow [Dec. 6] that the US is recognizing Jerusalem as Israel’s capital but he will also sign a waiver delaying the move for another six months and the whole process will likely take years.

Dennis Bernstein: How bad is the situation now?  We know that settlements are being built apace, that the repression continues in the Gaza Strip, where life is barely livable.

Ali Abunimah: It is interesting that no one is actually talking about what is happening on the ground in Jerusalem, where hundreds of thousands of Palestinians there are facing systematic ethnic cleansing by Israel.  This includes home demolitions, revocation of residency rights, land confiscations.

In the words of B’Tselem, the Israeli human rights group, since the occupation of East Jerusalem began in 1967, Israel has treated Palestinians in the city as “unwanted immigrants” and worked systematically to drive them out of the area.  Whatever Trump announces tomorrow will not change the situation.  The so-called international community is doing nothing about it and is letting Israel get away with it.

Dennis Bernstein: Jared Kushner is a broker for illegal settlements.

Ali Abunimah: He is a donor to illegal settlements, a philanthropist for illegal settlements.  How many headlines have been devoted to Kushner failing to disclose important information in his government ethics filings?  The latest is that he failed to disclose the fact that he was a director of his family’s foundation, which has donated to building settlements in the occupied West Bank, particularly the settlement of Beit El, the same settlement that receives philanthropic donations from David Friedman, Trump’s ambassador in Tel Aviv.

Kushner, who is supposedly charged with coming up with a peace plan, is actually busy funding settlements. Kushner’s family are close friends of Benjamin Netanyahu.  It is just farcical to pretend that anyone like Jared Kushner could ever be an honest broker.

Dennis Bernstein: Is all of this legal?

Ali Abunimah: That’s questionable.  Actually, in the past year there were lawsuits filed challenging this massive multi-billion dollar flow of tax-deductible, so-called charitable funds for illegal purposes, including the construction of settlements and massive donations to groups like Friends of the IDF.

Another issue is this whole business of what Jared Kushner was doing during the transition, when he was trying to undermine the policy of the sitting Obama administration and stop the UN Security Council resolution passed last December condemning Israeli settlements.  This all came out in the context of the Mueller investigation and Michael Flynn’s guilty plea, which revealed not so much a collusion with Russia as a very close collusion between the Trump transition and Israel.

Dennis Bernstein: You would think then that MSNBC, which makes a living on pumping up Russiagate, would want to jump into this case of collusion.

Ali Abunimah: The Michael Flynn revelation did not show collusion with Russia and certainly did not show any interference in the US election.  What Flynn pled guilty to was lying about two meetings.  Flynn is a serial liar, he lied about his work for the Turkish government.

The facts that were filed in the documents with his plea show that a “very senior member” of the Trump transition team, who has since been identified as Jared Kushner, had ordered Flynn to contact every member of the UN Security Council to try to defeat this resolution criticizing Israel.  It was also reported in The New York Times that Kushner had acted at the urging of Netanyahu.

None of this has anything to do with Russian interference in the elections.  What it does show is clear collusion at the highest level with a foreign government [Israel] to undermine and sabotage the policy of the sitting administration.

Dennis Bernstein: It doesn’t appear that Arab outrage is going to have much influence over what happens with this plan to move the capital from Tel Aviv to Jerusalem.

Ali Abunimah: On the contrary, I think that it has actually been facilitated by the fact that Saudi Arabia, which markets itself as the guardian of Islam, has been engaging in this major rapprochement with Israel, pressuring the Palestinians to accept what amounts to surrender, in order to get them out of the way so that Saudi Arabia and Israel can embrace each other and go to war together against Iran.

The New York Times reported details of the so-called Trump peace plan that Jared Kushner has been putting together, which basically creates a Palestinian state in name only.  The Palestinians would have very limited autonomy in very small non-contiguous areas of the West Bank.  They would have no control, no sovereignty, no capital in East Jerusalem, no right of return for refugees, and so on.  But they would be free to call this a Palestinian state if they want to.

All of this sounds familiar to people who have followed this issue because this is a rehashing of the kind of schemes that have been put forward since the 1990’s.  What is different this time is that Mahmoud Abbas, the Palestinian Authority leader, was called to Riyadh last month and told by Mohammad bin Salman that he was going to accept this or else.  The thinking behind it is that the Palestinian issue is a thorn in the side of the Saudi/Israeli alliance that wants to escalate the catastrophic confrontation with Iran.

Dennis Bernstein: How does the crisis with the prime minister in Lebanon play into all of this?

Ali Abunimah: The Saudis have been behind so many of the regional disasters, including escalating the situation in Syria by funding a proxy war that has killed hundreds of thousands of people.  For two years they have been bombing the poorest Arab country, Yemen, with millions suffering famine and tens of thousands killed and injured.  Saudi Arabia has been unable to defeat the people resisting them in Yemen.  They were trying to destabilize Lebanon and that failed because [Prime Minister] Hariri went home and rescinded his forced resignation under pressure from the Saudis.

Dennis Bernstein: I guess maybe the one silver lining in all of this is the boycott/divestment movement.  There is not much else going on in terms of global resistance to the brutality in occupied Palestine.

Ali Abunimah: I suppose it is possible to look at all of this and just feel immobilized and hopeless.  But I think it is important to feel hope as well.  Even in Jerusalem, Palestinians have been standing up to Israel and winning victories, as they did this summer when they forced Israel to back down from its efforts to impose stricter control on entrance to the al-Aqsa mosque compound.  That was a real victory for people power in Jerusalem against one of the strongest armies in the world.

Despite a twenty-fold increase in lobbying, Israel has not been able to stop the “impressive growth” of the Palestine solidarity movement, particularly the boycott/divestment/sanctions movement.  So it’s not time to be hopeless, it’s time to get on with the work, because there is lots to do and people power is still winning victories.

Dennis Bernstein: I guess you could say that proof of those victories is the amount of repression and clamp-down of Palestinian students and their supporters all over the country.

Ali Abunimah: And it is across the board now, including the effort of the big Silicon Valley companies who are helping the establishment to censor and limit the reach of independent media like us.  They know that people are listening and we are powerful, even though we may sometimes feel small in the face of the forces that are trying to reshape the world.

52 comments for “Missing the Significance of Israel-gate”