California’s wildfires, like the hurricane devastation in Texas and Florida, compounded human rights concerns about the Trump administration’s treatment of the undocumented amid emergencies, as Dennis J Bernstein reports.

Even as Northern California’s massive wildfires are brought under control, another life-or-death question remains: Will the many undocumented people in the area who have lost everything be able to get help from the Federal Emergency Management Agency and the Red Cross? 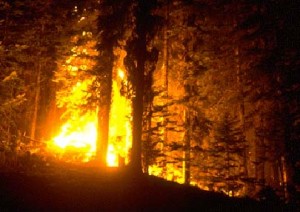 This question of the rights of the refugee and the undocumented has been central in the minds of those people directly affected by recent natural disasters that have been exacerbated by global warming, not just the California wildfires but the hurricanes that struck Houston, Florida and Puerto Rico.

There’s also an economic element to the issue: Will Latinos and other people of color be protected as they undertake the dangerous work of the the frontline cleaning operations?

In Northern California and Sonoma County, which includes the hardest hit city of Santa Rosa, the question of what to do was no small trauma for hundreds of immigrant families, including many farmworkers and day laborers, who fled to the coast and took shelter in front of the Pacific Ocean and the roar of the waves, instead of bedding down in the official designated shelters.

And, while we’ve heard much concern about the loss of California’s Wine Country, there has been less focus on the devastation of Farmworker Country and Indian Country. Indeed, even as the fires were raging, workers were sent in to harvest the last of the grape crop.

I delved into these issues in a recent conversation with Pablo Alvarado, Executive Director of the National Day Laborer Organizing Network, or NDLON, who was just back from a tour of the massive fire damage on Oct. 26.

Dennis Bernstein: In the context of the California fires, it is still in question where undocumented workers who have lost their homes are going to go, what kind of support they can count on.

Pablo Alvarado: Sad to say, federal disaster relief is limited and often depends on who is affected. That is why people in Puerto Rico receive different treatment than people in Houston or Florida. Because ultimately those are brown people in Puerto Rico.  The first step is that first responders provide direct assistance to homeowners and business owners.  They bring the relief that people need to reconstruct their properties and reconstruct their lives.

In Northern California, we are working to ensure that these second responders are protected, that they have the proper training and equipment.  We want to make sure that every worker who goes out at the beginning of the day comes back safely to his loved ones at the end of the day. A significant proportion of these second responders are undocumented workers and I can assure you that the work won’t get done without these migrant workers and day laborers. The message to America that will come out of these reconstruction efforts is very clear: If you accept the fruits of my labor, you must recognize my humanity. If you benefit from what I produce with my hands, you must give me my rights. We want to raise the value of labor in the context of this massive reconstruction effort.

Dennis Bernstein: What does it mean in real terms to respect the humanity of the workers?

Pablo Alvarado: Everyone in this country enjoys the fruits of other people’s labor. But when it comes down to ensuring that workers are safe at the workplace, most people don’t want to be bothered. I visited Houston and in every home you could find a migrant construction crew at work there. Undoubtedly, many of these workers were undocumented, meaning that their humanity was being denied. By reconstructing people’s homes, by reconstructing people’s lives, these workers earn the right to belong to our communities.

Dennis Bernstein: I understand that the National Day Laborer Organizing Network is going to be expanding in Northern California because of all the reconstruction work going on.

Pablo Alvarado: NDLON has been able to build a national infrastructure to respond to natural disasters. You can go to reconstructionworks.org to see the intervention we did after Sandy in New York and New Jersey, or to reconstructionworkstexas.org to view the reconstruction we have been doing in Houston after Harvey. We have dozens of health and safety trainers across the country who we plan to mobilize to come to Northern California, Houston and Florida to train workers by the thousands.

Many day laborer and domestic worker families were impacted by the fire. Not only did many lose their housing, but they lost their employment as well. The houses they were cleaning and providing gardening services to are no longer there. We have put a petition online to help these workers rebuild their own lives so that they can continue to help their communities rebuild.

Whenever there is a natural disaster of large magnitude, it is common to find people coughing blood, with skin rashes, etc. Unscrupulous employers will come and hire people without providing the health and safety equipment they need. Not only that, oftentimes they will refuse to pay the workers their wages after they have done the work, using the issue of migration to keep the workers quiet.

Dennis Bernstein: How do you determine if it is safe to enter an area that has been hit by a natural disaster? 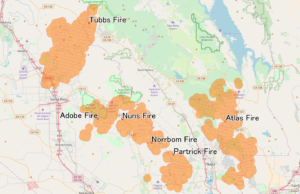 A map of the 2017 Northern California wildfires from October 5 to October 12. (Wikipedia)

Pablo Alvarado: Right now our own team is doing the research, consulting with the proper institutions. Trainers help people identify the dangers, for example, in the case of a flood, electrical wires or chemicals in the water. This is exactly what we are doing here in Northern California, identifying the risks and putting together easily readable educational materials. Since the early 1990’s, after the fires in Malibu, we have organized relief brigades, who are often first responders at disaster areas.

After Sandy, for instance, in Staten Island, we were running a food bank there and when the workers saw what was happening, they began packing food into bags and went to the neighborhoods to bring food to the families. They were the first to get there. The workers even cleaned the homes of people who were adversaries of immigrants and, at the end of the day, the people were in tears and saying how grateful they were.

In the end, this is our country. It does not belong to the white supremacists. The day laborers, the construction workers and domestic workers are going to show the way forward.

Dennis Bernstein: What kind of precautions are you taking to protect the workers from immigration people [ICE]? We know that a lot of people without documents fled, some to campsites along the coast.

Pablo Alvarado: This was a big issue in Houston. Undocumented people have to think twice before going to shelters run by government agencies. That is why it is important that civil society insist that people in shelters are not questioned about their status. In Houston there were thousands of people who stayed away from shelters because of that fear. Even many legal permanent residents didn’t dare ask for assistance.

If we cannot work with this administration, we have to work with local authorities, who understand that undocumented people are an asset to their communities, not a burden. This becomes especially clear in the case of natural disasters. When undocumented people are themselves affected by a natural disaster, they should get the aid that they need. If the government doesn’t provide assistance to undocumented communities, then we have to look elsewhere. That is exactly what we are doing in Northern California.

We know that undocumented people cannot receive aid from the federal government, but we can raise money to make sure that they can find new housing and go on with their lives. At this moment, when we ask undocumented workers to help us rebuild, we should be willing to provide them assistance as well.

← Sorting Out the Russia Mess
Democrats, Class and Russia-gate Magic →

5 comments for “California Wildfires and the Undocumented”