Despite all its armed might and long history of conquests, America remains a perpetually frightened country without a strong movement to protest this imperialism and warmongering, notes poet Phil Rockstroh.

Rumors of war and the lexicon of war permeate the culture of empires, and the U.S. empire is not an exception. In a concomitant manner, the specter of violent death pervades the imagery of the U.S. entertainment industry and stalks the citizens’ dreams.

Present circumstances merge with the sleeping monster of history: Close your eyes and images of cross burnings, lynchings, mountains of bison skulls, flaring veils of napalm, and blooming mushroom clouds rise from within.

All the bristling, military armaments of the Pentagon cannot turn back the raging storm.

The mere existence of vast arrays of weapons, deployed or not, does great harm to the soul of a nation. U.S. Americans are fearful, day and night. We would not feel secure even if we ensconced ourselves in an armory.

An empire, built on the backs of slaves, both actual and de facto, with its expansion across the continent expedited by genocide, has conjured internal Furies — raging apparitions, borne of the nation’s collective soul and of nature’s fury, that cannot be repelled by weapons of any make.

Amid the empire of the feckless, we on the Left have been rendered all but voiceless. We wander in a wasteland of resentment, marginalized, denied a voice in cultural discourse. Online, we gibber and snarl at each other and curse our predicament like Dante’s figures of the damned in pits of the Inferno. By all indications, we are bereft of the knowledge of where and how to even begin the dialog.

Yet: Recently, by a resounding margin, Venezuelans vote to retain socialism. (The nation’s citizenry are fully cognizant that U.S. imperialist subterfuge is the root of their nation’s troubles.)

Concurrently, polls of former citizens of the fallen USSR reveal, the majority favor delivering capitalism to the landfill of history and reestablishing communism. (Unlike all to many U.S. Americans, they know they have been bamboozled.)

Although: Across Europe, the hard, racist right is in ascendancy. A predictable phenomenon, due to liberalism’s serial betrayals of the middle and laboring classes in behalf of their capitalist vampire benefactors. The more undiluted the form of capitalism — the greater the levels of deprivation and attendant fear and displaced anger evinced by a power-bereft citizenry. The only factors that have saved capitalism from itself, on an historical basis, have been measures of progressive reform and piecemeal, socialist policies.

And that is the reality that frightens the capitalist over-class and motivates them to set into action their scheming, prevaricating operatives and propaganda-bandying shit-kickers. To wit, their ruthlessness knows no limit in regard to preventing capitalism’s exploited multitudes from gaining an even glancing degree of awareness of: The system was, from the get-go, designed to benefit a ruthless few and to the detriment of the many.

Thus we discover, the reason capitalism’s elite invest so much time, effort, and money rigging the game, from the political structure to mass media. It is the reason one could never have an honest dialog with the beneficiaries of the system. Where would be the profit for them in risking their litany of lies being countered and their false mythos exposed as the life-negating fraud that it is? Honesty and openness were not among the factors that enabled the capitalist elite to ascend to a position of dominance.

Willful and belligerent ignorance comprises the brick and mortar of the capitalist system’s mental architecture; the structure stands on a foundation of lies. But the phenomenon presents dissidents with an opportunity because what appears to be an implacable barrier is but a collective mirage, a vapor of the mass mind. What appears to be an all-powerful system is but a group hallucination, a joint dream of interior phantoms. This is the reason, when we attempt to fight back, we appear to be flailing into empty air.

To dissipate the undead nightmare, we must reimagine the image and do so from within the living landscape of the imagination; otherwise, we are mistaking a mirage for terra firma.

As for myself, I’m a member of the Nambia Liberation Army. The calling of a poet is to make the invisible visible.

Of course, the flaming orange, ambulatory dumpster fire Trump should be mocked for proclaiming that there exists on planet earth a nation called Nambia. The man has the range of knowledge of some bar-stool blowhard, the insufferable type who begins almost every wit-defiant declaration with “irregardless” or “actually” before launching into a false narrative based on a inane premise misinformed by a belligerently obtuse, fact-resistant Weltanschauung.

The same applies to toxic innocent types who believe capitalist (so called) democracies exist to respond to the will of the citizenry. Who would have chosen for high office the sleazy, craven, and sub-cretinous gallery of grotesques known as the Western political class? Only slaves who have been convinced that the clank and clatter of their shackles is the very song of freedom would argue that this extant, waking nightmare arrived as a matter of choice. 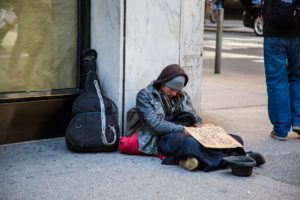 Attendant to the deception: The notion that the dismal circumstance will recede by the banishment of Donald Trump from the scene. Trump is merely a representation of one of the genera of imps squatting in the dark recesses of capitalism’s forsaken soul. He is the very embodiment of a crackpot realist.

Crackpot realist types, as is the case with Trump, view and present themselves as emissaries from “the real world,” as steely-nerved men of action. The breed has a compulsion to bandy dismissive declarations, such as, “that is just mere talk. I offer real world solutions.” And, in the magniloquent lingua franca of Trump, he possesses the “best” (crackpot) mindset and he, and he alone, will deliver the bestly of the bestest of real-world solutions.

Yet, outside the feedback loop of those indoctrinated by Calvinist-cum-capitalist conditioning, talk is action. Talk is eros. Deeply depressed people lose both their eros and their voice. Well-written books of prose and poems speak in a penetrating voice. The problem is, all too many of the working class and the poor have been bullied by the dominant order into believing that we have no voice — a voice that is capable of giving rise to the inner self, both lambent of mind and plangent of heart, thus provides agency towards action and gives context to experience. The crackpot realist notion that insists, conversation is a lesser function of humanity amounts to soul-decimating tyranny, and is a product of the Puritan Ethic, a coda for slaves. Words are the handmaiden of action and experience.

Talk is audio architecture and dance. Words are winged yet speak from the bones of the earth. Denied expression, we lose heart; then we lose our humanity. Suggestion for approaching and engaging in propitious dialog: Don’t demand final, definitive answers. The very notion, in an instant, demeans and destroys the potential of unfolding, organic phenomenon.

If you persist, you will have deracinated dialog from its natural habitat — a breathing landscape of infinite mystery. Acceptance of the following is crucial: Acts of exploration will serve to uncover more questions.

The heart is not a mere pump; it is the hub of imagination; it yearns for experience, thinks in living imagery, and will lead, if followed, into participation mystique. Any attendant answers … are an after-the-fact phenomenon. Then the scene shifts. The structure of the old order becomes a veil of dust, its dogma, the admonition of a long-dead ghost. A ghost is an uncoupled habit, a self-resonating feedback loop shuffling through a fixated mind, an entity devoid of life thus cannot generate novel questions.

I question; therefore, I reveal signs of life. Yet the questions must remain open-ended, for when you insist on a forced finality, you have arrested and killed the process; you have attempted to render the voluble soul of the world into a didactic corpse.

For the affront, its life-sustaining fire, that suffuses every particle in the cosmos, will respond with the worst of all insults. It will deem you a bore and turn its numinous face away from you.

Speaking of the numinous, with Halloween approaching, our four-and-a-half-year-old donned his Halloween costume and exhorted me to play one of his favorite games i.e., let’s pretend.

“When mommy comes in, make her think we’ve turned into monsters.”

Drawing on the Method, I reach down deep within and feel the rage of the besieged earth, thus knowing what my son will come upon later in life: Our humanity is inseparable from the monstrous. To live is to live off death — but, in the case of Late Stage Capitalist humankind, the monster imperative has shifted into runaway, has become a self-resonating feedback loop of destructive impulses.

The kid is transmigrating through an obsession with monsters phase. Making his way through a wilderness of archetypes, he has picked up on an effable truth about his species … that will take a lifetime to process. All who are aware are wounded by the apprehension. If you do not take hold of the monster within, he will take hold of you. Both on a personal basis as well as the monster we know as human history.