Like a caged hamster on a running wheel, the American people are trapped in perpetual wars that the foreign policy elites offer no way to end, only excuses to continue, observes ex-CIA analyst Paul R. Pillar.

The newest issue of Foreign Affairs features the theme of “America’s Forgotten Wars,” with a cover illustration that juxtaposes a carefree scene of Americans enjoying a picnic with a scene of American soldiers fighting and incurring casualties in some sandy and desolate battle space. 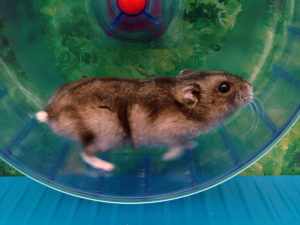 Hamster on a running wheel. (Photo from Wikipedia)

The picture depicts truthfully the detachment between, on one hand, the daily interests and attitudes of most Americans and, on the other hand, the disturbing reality of the United States being engaged continuously in a variety of lethal military operations in multiple lands overseas.

Andrew Bacevich has elsewhere provided several reasons why, as he puts it, “the vast majority of the American people could not care less” that their country has become mired in what amounts to permanent warfare abroad. These reasons include, for example, that the true costs of these military expeditions have not been completely tabulated and that “blather crowds out substance” in American public discourse about foreign policy.

The pattern of permanent U.S. involvement in warfare, which has prevailed for the past 16 years, departs markedly from what had been the traditional American approach toward war and peace, and therein lies an additional set of reasons why Americans at home are not now up in arms over how fellow citizens have had to take up arms and fight endlessly overseas. That tradition grew up throughout the Nineteenth Century and was cemented by America’s greatest overseas military effort ever: World War II.

The tradition was one of war being a relatively infrequent necessity that involved the United States sallying forth to slay a clearly defined monster of the moment and then, after a clear and victorious ending, returning to peacetime pursuits.

As I have discussed at greater length elsewhere, the application of this template of what war is expected to look like — and especially the expectation that any war will have a definite, identifiable end — has entailed numerous problems when applied to more continuous American activities abroad.

The problems have included the quandary of what to do about some of the detainees at Guantanamo. The past experience of holding prisoners of war until the end of hostilities does not apply, not only because of any distinction between legal and illegal combatants but also because events that led to the current detentions will never get to a point that can be identified as the end of hostilities.

Another problem has been the difficulty Congress has had in exercising its constitutional responsibility to define clearly the objective and scope of U.S. involvement in any foreign war.

Looking for a Traditional End

At some level of the American psyche is the belief that today’s combat, like most of yesteryear’s, will have a clear (and victorious) end. Thus, most Americans feel no need to contemplate and discuss what ought to be the very disturbing prospect that Americans will be fighting abroad forever.

That the current unending warfare was launched as a so-called “war on terror” has added significantly to these problems. (Bacevich lists as another of his reasons for the acceptance of permanent war that “terrorism gets hyped and hyped and hyped some more.”)

The “war on terror” label, and the associated concept, never were logical. As the late Zbigniew Brzezinski once commented, calling this a war on terror makes as much sense as calling World War II the “war on blitzkrieg.” Terrorism is a tactic that has been used for millennia, and in that regard the countering of it is endless. The “war” terminology also has encouraged the excessive militarization of counterterrorism.

On top of this was George W. Bush’s encouragement to Americans to respond to terrorism by going shopping and to “get down to Disney World in Florida … take your families and enjoy life, the way we want it to be enjoyed.” These words were in one sense prudent advice not to do terrorists’ work for them by overreacting with fear. But they also encouraged the very sort of detachment and lack of concern about endless warfare that is depicted on the Foreign Affairs cover.

Added to this are additional American tendencies in thinking about America’s involvement with the world — especially the tendency to believe that any problem abroad can be solved with enough determination and effort, and that the United States is the party that should take the lead in solving it. There is great reluctance to leave any situation that still looks like a mess, because the leaving looks like failure, regardless of what specific U.S. objectives may have been accomplished.

These American habits of thought are added to the more general human tendency to treat sunk costs as investments. The result is recurrent mission creep, in which expeditions that began in the name of countering terrorism morph into a nation-building enterprise or an effort to counter the influence of some other state.

That the current streak of warfare already has gone on for so long has further encouraged acceptance of it as the new normal. Much of a generation has come of age knowing the United States as always engaged in warfare abroad. Permanent warfare, and refusal to accept anything that could be depicted as defeat, has become a frame of reference not just for the general public but also for foreign policy cognoscenti.

That framework is readily evident in the articles on Iraq and Afghanistan in that issue of Foreign Affairs. (A refreshing contrast is the piece by former Ambassador Robert Ford on Syria, titled “Keeping Out of Syria: The Least Bad Option,” which concludes that the one useful thing the United States can do is to help neighboring countries provide for Syrian refugees.)

The article on Iraq, by Emma Sky (who was political adviser to one of the U.S. military commanders in Iraq) is titled “Mission Still Not Accomplished in Iraq.” It repeats most of the now-familiar arguments for the United States to keep plodding on militarily in Iraq. This includes the idea that, even with the reduction of the Islamic State’s so-called caliphate, the outcome of a civil war in a Middle Eastern country is supposedly a key determinant of international terrorism in the West. It includes Sky’s assertion that “U.S. support is still needed to discourage other countries in the region from filling the power vacuum” — disregarding how misleading is the metaphor of a vacuum when applied to international politics.

Sky’s ultimate rationale for staying militarily in Iraq seems to be, as is true of many such rationales these days, to counter Iranian influence — never mind that Iran has been on the same side as the United States in the fight against the Islamic State. Sky writes that if Iranian influence is left unchecked, “this could lead not just to an Iranian-Saudi confrontation but to an Iranian-Israeli one as well.”

This sounds like as much of a problem with Saudi Arabia and Israel as with Iran. It is, moreover, a reflection of how the mission creep has moved beyond expansive notions of counterterrorism and even beyond nation-building to immersion in someone else’s regional rivalries. This rationale also forgets how the whole Iraqi mess, including increased Iranian influence, that Sky does not want to leave while it is still a mess began with a U.S. military invasion.

The article on Afghanistan, by former military commander Stan McChrystal (co-written by his former aide-de-camp Kosh Sadat) sounds more self-aware than Sky’s about how the military effort in question is akin to endless plodding on a treadmill. McChrystal acknowledges that the course he recommends is open to the charge that it “would meet the definition of insanity — which, as that old adage has it, is doing the same thing over and over again and expecting a different result.” Although McChrystal has some suggestions for tweaking the policy, his basic conclusion is that the United States is “stuck” with doing more of the same.

In neither of these treatments of the wars in Iraq and Afghanistan is there a basis for identifying or expecting a conclusion to the expeditions. There is barely any light being offered suggesting there is an end to the tunnel, let alone a view of the tunnel’s end itself.

With knowledgeable observers succumbing to the idea that permanent warfare is normal, it is no surprise that the American public does not seem to be bothered more than it is by the current wars.

← Escaping the Colonized Mind
What Did Hillary Clinton Know? →