A number of recent press articles, including an over 8,000-word feature piece in The New York Times have asked, to quote the Times’ headline, “Why Are More American Teenagers Than Ever Suffering From Severe Anxiety?” 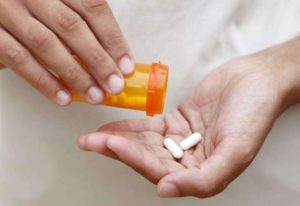 The typical modern response to people suffering from anxiety is to prescribe medication.

Although the question was proffered, the reporters and editors responsible for the articles remain resolutely obtuse to the obvious: The bughouse crazy environment of late-stage capitalist culture evokes classic fight-or-flight responses attendant to episodes of severe anxiety and panic attacks.

The word panic has its derivation in reference to Pan, the Greek god of wilderness and wildness, of the animal body encoded within human beings and its attendant animalistic imperatives. To wit, deracinate an animal from its natural habitat and it will evince, on an instinctual basis, a fight-or-flight response.

If caged, the unfortunate creature will pace the confines of its imprisonment, chew and tear at its fur and flesh, become irritable, enervated, languish and even die from the deprivation of the environment it was born to inhabit. A caged animal, even if the unfortunate creature endures captivity, is not the entity nature conceived; the living being has been reduced to A Thing That Waits For Lunch.

Human beings, animals that we are, respond in a similar fashion. Experiencing anxiety is among the ways our innate animal spirits react to the capitalist cage. Inundate a teenager with the soul-defying criteria of the corporate/consumer state, with its overbearing, pre-careerist pressures, its paucity of communal eros, its demands, overt and implicit, to conform to a shallow, manic, nebulously defined yet oppressive societal order, and insist that those who cannot adapt, much less excel, are “losers” who are fated to become “basement dwellers” in their parents’ homes or, for those who lack the privilege, be cast into homelessness, then the minds of the young or old alike are apt to be inundated with feelings of angst and dread.

Worse, if teenagers are culturally conditioned to believe said feelings and responses are exclusively experienced by weaklings, parasites, and losers then their suffering might fester to the point of emotional paralysis and suicidal inclinations.

What does the capitalist state offer as remedy? Obscenely profitable, corporately manufactured and widely prescribed psychoactive medications. Treatment, which, at best, merely masks symptoms and bestows the illusion of recovery. 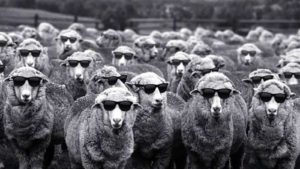 A graphic representing conformity in the modern world.

As R. D. Laing observed: “What we call ‘normal’ is a product of repression, denial, splitting, projection, introjection and other forms of destructive action on experience. It is radically estranged from the structure of being.”

Closer to fact: The problem of homelessness is the result of a societal-wide perception problem — the phenomenon is the very emblem of the scrambling, twisting, dissociating, and displacing of perception that capitalist propagandists specialize in. Homelessness would be considered a relic of a barbaric past if this very simple principle was applied: Having access to permanent shelter is a human right and not a privilege.

What kind of a vile, vicious people would deny that simple proposition? Those conditioned by a lingering Puritan/Calvinist mindset to believe: Punishment for resisting the usurpation of the fleeting hours of one’s finite life must be severe. If the over-class can no longer get away with, as was once common practice in the Puritan/Calvinist tradition, public floggings to whip the labor force into line, then those who will not or cannot comply will be cast onto the cold, unforgiving concrete of a soulless cityscape.

It comes down to this, societies that are ridden with vast wealth inequity, due to the machinations of a rapacious over-class, create the obscenity known as homelessness. Moreover, the situation is only one of the numerous obscenities inherent to state capitalism. Obscenities that include, events that are dominating the present news cycle, e.g., the predations of a lecherous movie mogul, to the sub-cretinous doings and pronouncements of a Chief of State who is a bloated, bloviating, two-legged toxic waste dump.

How is it then, liberals fail to grasp the fact that the Trump presidency is not an aberration; rather, his ascension to power should be regarded as being among the high probability variables of late-stage capitalism and empire building? The psychopathic, tangerine-tinged clown Trump is the embodiment of the Second Law of Thermodynamics, a development that is concomitant to over-expanded empires. Thus he will continue to flounce deeper into the quagmire of crash-engendering, economic legerdemain and perpetual war.

The crowd at President Trump’s inauguration on Jan. 20, 2017. (Screen shot from Whitehouse.gov)

Empires are death cults, and death cults, on a subliminal basis, long for their own demise. Paradoxically, the collective mindset of imperium, even as it thrusts across the expanse of the world, renders itself insular, cut off from culturally enhancing novelty, as all the while, the homeland descends into a psychical swamp of churning madness.

A draining of the swamp of the collective mind cannot come to pass, for the swamp and citizenry are one. Withal, the likes of leaders such as Trump rise from and are made manifest by the morass of the culture itself. In a swamp, the gospel of rebirth and redemption is heard in the song of humus. New life rises from its compost.

In the presence of Trump’s debased mind and tombified carcass, one is privy to arias of rot. While Hillary Clinton’s monotonous tempo was the dirge of a taxidermist — cold, desiccated of heart, and devoid of life’s numinous spark — Trump’s voice carries the depraved cacophony of a Célinean fool’s parade … its trajectory trudging towards the end of empire.

In a word, no. For example, the collective psyche of U.S. culture as been enflamed by the revelations that actresses were coerced into sexual encounters with a movie mogul whose power in the industry was only matched, even enhanced, by his sadistic nature. The staff of his company assisted, was complicit in, or remained silent about his lechery, as did the whole of the movie industry and the entertainment press. All as NFL athletes are being threatened with expulsion from the League if they kneel during the national anthem.

Yet the great unspoken remains: The enabling of and submission to the degradation, exploitation and tyranny, and the lack of resistance thereof share a common and singular factor: The careerism of all concerned. The cultural milieu concomitant to capitalism is at the rotten root and noxious blossoming of the situation. 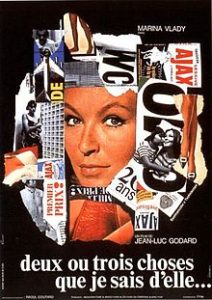 Jean-Luc Godard’s 1967 cinematic barnburner “Two or Three Things I Know About Her” should be required viewing for those unaware or in denial of the acuity of the film’s theme i.e., becoming enmeshed within the psychical landscape of dominance, degradation, and submission inherent to and inseparable from capitalist/consumer culture will cause one to become party to societal sanctioned prostitution. When life is negotiated within a collective value system that devalues and deadens the individual’s inner life thus warps every human transaction, anomie descends, the worst among a people ascend to positions of power.

“Panic is the sudden realization that everything around you is alive.” — William S. Burroughs, from Ghost of Chance

When friends visited me in New York, where I lived for decades, I would take them on walking tours through the city. We would cross the Westside Highway and stroll the pedestrian walk along the Hudson River, or cross the East River by walking across the Brooklyn Bridge.

The effect of these excursions on people was often profound … the combined elements of the elemental beauty of the rivers and vastness of the city’s architecture and scope, clamor, and the dense interweaving of traditional ethnic customs and ad hoc social codes of New Yorkers often would heighten the visitors’ senses and open them to larger, more intricate awareness of themselves and extant reality … the freeways of the contemporary mind (conditioned to be constantly engaged in manic motion, with one’s mind either frenzied by an obsession with performing (ultimately futile) maneuvers directed to saving time — or stalled at a frustration inducing standstill) were replaced by the exigencies of life at street level, i.e., novel situations that had to be apprehended and negotiated.

The possibilities of life seemed greater. The crimped eros of insular suburban thought became loosened before the city’s intricacies and expansiveness. Although: Not all, or even a scant few, New Yorkers can maintain the state of being. Few of us can live by Rilke’s resolve to “make every moment holy.” Life, in the city, becomes grotesquely distorted … High rents, inflicted by hyper-gentrification, in combination with the deification of success and its cult of careerism overwhelm one’s psyche … There is so far to fall.

Angst (the word originally can be traced to the ancient Greek deity Ananke, the immovable by prayer and offering bitch Goddess of Necessity and the root word of anxiety) clamps down one’s sense of awareness. Ananke dominates the lives of the non-privileged citizenry while Narcissus, Trump’s, the Clintons’, et.al. and their financial and cultural elitists’ patron God rules the day. The pantheon of possibility has been decimated, a cultural cleansing has been perpetrated, by the egoist caprice of the beneficiaries of the late capitalist dictatorship of money.

Hence, we arrive at the primal wisdom tacitly conveyed by anxiety-borne states of fight or flight. Due to the reality that capitalism, on both an individual and collective basis, drives individuals into madness, all as the system destroys forest and field, ocean and sea and the soul-scape of all who live under its rapacious dominion, our plight comes down to this: We either struggle and strive, by and any and all means, to end the system — or it will end us.