The U.S. government’s crime of saturating large swaths of Vietnam with poisonous Agent Orange got short shrift in PBS’ “The Vietnam War,” but it remains an ongoing calamity, write Marjorie Cohn and Jonathan Moore.

By Marjorie Cohn and Jonathan Moore

Watching the Ken Burns-Lynn Novick 18-hour series, “The Vietnam War,” is an emotional experience. Whether you served in the U.S. military during the war or marched in the streets to end it, you cannot remain untouched by this documentary. The battle scenes are powerful, the stories of U.S. veterans and Vietnamese soldiers who fought on both sides of the war compelling.

The toll in human terms caused by the war is staggering. Nearly 58,000 Americans and 2 million to 3 million Vietnamese, many of them civilians, were killed in the war. Untold numbers were wounded. Many U.S. veterans of the war suffer from Post Traumatic Stress Disorder. More U.S. Vietnam War vets have committed suicide than died in the war. However, those numbers do not begin to tell the complete story of the war.

In one of its most serious omissions, the series gives short shrift to the destruction wreaked by the U.S. military’s spraying of deadly chemical herbicides containing the poison dioxin over much of Vietnam, the most common of which was Agent Orange. This is one of the most tragic legacies of the war. Yet, aside from a few brief mentions, the victims of Agent Orange/dioxin, both Vietnamese and American, are not portrayed in the series. More importantly, the ongoing harm created by this chemical warfare program is never mentioned.

Agent Orange/dioxin was an herbicidal chemical weapon manufactured by U.S. chemical companies like Dow and Monsanto and sprayed by the U.S. military from 1961 to 1971.  Dioxin is one of the most toxic chemicals known to humankind. Approximately 3 million Vietnamese and thousands of U.S. and allied soldiers were exposed to Agent Orange/dioxin.

The U.S. government was aware that the use of poison as a weapon of war was forbidden by international law well before it authorized its use in Vietnam. In fact, the U.S. government suppressed a 1965 report, called the Bionetics study, that showed dioxin caused many birth defects in experimental animals. It was not until the results of that study were leaked that the use of Agent Orange/dioxin was stopped.

Those exposed to Agent Orange/dioxin often have children and grandchildren born with serious illnesses and disabilities. There is a virtual unanimity of opinion within the international scientific community that exposure to Agent Orange/dioxin caused some forms of cancers, reproductive abnormalities, immune and endocrine deficiencies, and nervous system damage. 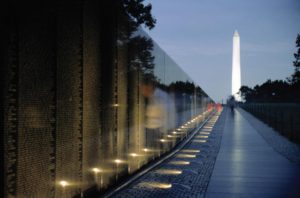 Second- and third-generation victims continue to be born in Vietnam, as well as to U.S. veterans and Vietnamese-Americans in the United States. For many of them and their progeny, the suffering continues.

Mai Giang Vu was exposed to Agent Orange while serving in the Army of South Vietnam. He carried barrels of chemicals to spray in the jungle. His sons were unable to walk or function normally. Their limbs gradually “curled up” and they could only crawl. By age 18, they were bedridden. One died at age 23, the other at age 25.

Nga Tran, a French Vietnamese woman who worked in Vietnam as a war correspondent, was there when the U.S. military began spraying chemical defoliants. A big cloud of the agent enveloped her. Shortly after her daughter was born, the child’s skin began shedding. She could not bear to have physical contact with anyone. The child never grew. She remained 6.6 pounds – her birth weight – until her death at the age of 17 months.

Tran’s second daughter suffers from alpha thalassemia, a genetic blood disorder rarely seen in Asia. Tran saw a woman who gave birth to a “ball” with no human form. Many children are born without brains; others make inhuman sounds. There are victims who have never stood up. They creep and barely lift their heads.

Rosemarie Hohn Mizo is the widow of George Mizo, who fought for the U.S. Army in Vietnam. After he refused to serve a third tour, Mizo was court-martialed, spent 2½ years in prison and received a dishonorable discharge. Before his death from Agent Orange-related illnesses, Mizo helped found the Friendship Village where Vietnamese victims live in a supportive environment.

Dr. Jeanne Stellman, who wrote the seminal Agent Orange article in Nature, said, “This is the largest unstudied [unnatural] environmental disaster in the world.”

Dr. Jean Grassman, of Brooklyn College at the City University of New York, stated dioxin is a potent cellular disregulator that alters several pathways and disrupts many bodily systems. She said children are very sensitive to dioxin, and the intrauterine or postnatal exposure to dioxin may result in altered immune, neurobehavioral and hormonal functioning. Women pass their exposure to their children both in utero and through the excretion of dioxin in breast milk.

These were some of the witnesses who testified at the International Peoples’ Tribunal of Conscience in Support of the Vietnamese Victims of Agent Orange, held in Paris in 2009.

In the 1973 Paris Peace Accords, the Nixon administration promised to contribute $3 billion for compensation and postwar reconstruction of Vietnam. That promise remains unfulfilled.

In 2004, both U.S. veteran and Vietnamese victims sued the chemical companies who knowingly manufactured Agent Orange and other herbicides, which they knew contained an unnecessary but lethal amount of dioxin. The victims were prevented from suing the U.S. government because of the doctrine of sovereign immunity.

Despite agreeing to compensate U.S. veterans in an earlier lawsuit for some maladies caused by their exposure to Agent Orange and other herbicides, the U.S. government and the chemical companies maintained before the courts and to this day that there was no evidence to support a connection between exposure and disease.

The efforts by veterans’ groups and others to take care of our vets has resulted in a compensation scheme administered by the Veterans Administration. It annually pays out billions of dollars to veterans who can demonstrate they were in a contaminated part of Vietnam and have an illness that is associated with exposure to Agent Orange.

Unfortunately, the Vietnamese who were exposed to Agent Orange on a scale unheard of in modern warfare have been left out in the cold. The failure to include this history in the Burns/Novick series is unconscionable. Indeed, one could argue that even the mention of Agent Orange in the series was seriously misleading. For example, in the last episode, the narrator notes the spraying campaign but does so against a verdant backdrop of green fields and abundant crops.

The actions of the U.S. government and the U.S. manufacturers of Agent Orange and other deadly herbicides is a moral outrage. The U.S. government has funded the cleanup of dioxin at the Danang airport, only one of the 28 “hot spots” still contaminated by dioxin. But this effort ignores the damage caused to the people who live there and eat the crops, animals and fish from the surrounding area. All of these hot spots need to be remediated.

Rep. Barbara Lee (D-California) has introduced H.R. 334, the Victims of Agent Orange Relief Act of 2017, which has 23 co-sponsors. The bill would lead to the cleanup of dioxin and arsenic contamination still present in Vietnam. It would provide assistance to the public health system in Vietnam directed at the 3 million Vietnamese people affected by Agent Orange. It would also extend assistance to the affected children of male U.S. veterans who suffer the same set of birth defects covered for the children of female veterans. It would enable research on the extent of Agent Orange-related diseases in the Vietnamese-American community and provide them with assistance. Finally, it would support laboratory and epidemiological research on the effects of Agent Orange.

If you agree that much more needs to be done to address this ongoing calamity of the Vietnam War, contact your representative and ask him or her to sign on as a co-sponsor of H.R. 334. Effective compensation for Agent Orange/dioxin victims is a moral imperative.

?Marjorie Cohn http://marjoriecohn.com/, a veteran of the antiwar movement, is on the national advisory board of Veterans for Peace. She is co-author (with Kathleen Gilberd) of Rules of Disengagement: The Politics and Honor of Military Dissent. And she served as one of seven judges from three continents at the International Peoples’ Tribunal of Conscience in Support of the Vietnamese Victims of Agent Orange, held in Paris in 2009. Jonathan Moore was one of the attorneys who filed a lawsuit to gain compensation for Vietnamese who were exposed to Agent Orange/dioxin. Cohn and Moore are co-coordinators of the Vietnam Agent Orange Relief & Responsibility Campaign.