Japan’s current nationalist leadership downplays and denies many crimes from World War II, but a global movement continues to press for a recognition of the mass rapes and murders of so-called “comfort women,” reports Dennis J Bernstein.

On Sept. 22, a global campaign demanding justice and reparations for the Japanese military’s “Comfort Women” unveiled a bronze statue in San Francisco memorializing the Korean and other Asian women who were sexually abused by Japan’s soldiers during World War II.

The statue, erected by a coalition of local groups led by the Comfort Women Justice Coalition, shows three young women, holding hands in a circle, facing outwards, as an old woman looks on. 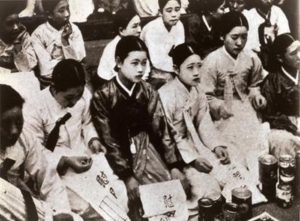 Korean children holding “Comfort bags” which were used to accommodate cans and commodity goods in front of them and sent overseas to the soldiers. (Wikipedia)

I spoke with retired San Francisco Superior Court Judges Lillian K. Sing and Julie Tang, leaders of the movement of the Comfort Women Justice Coalition, and Flashpoints correspondent K.J. Noh, about the war crime in which as many as 400,000 women were mass raped and often murdered by the Japanese.

Dennis Bernstein: K.J., lay out a brief background on the so-called “comfort women.” When did this mass kidnapping and rape take place…and basically who was responsible?

K.J. Noh: The term “Comfort Women” is a euphemism for the young women and girls forced into sexual slavery by the Japanese military between 1932 and 1945 throughout the Asia Pacific region of Japan’s colonial “co-prosperity sphere.”

It’s estimated that approximately between 200,000-400,000 women and girls, some as young as thirteen, were forced into an industrialized system of rape, “servicing” up to 60 soldiers a day. Scholars estimate that this resulted in a fatality rate of up to 90%. The system has been described as “considered unprecedented in its cruelty and magnitude,” and survivors have referred to “comfort stations” as “a living hell”, “a slaughter house”.

The Empire of Japan was a theocratic military dictatorship at that time, and its military government systematically planned, implemented, trafficked, transported, enslaved and, towards the end of war, slaughtered these women. This crime against humanity has still not been officially acknowledged by the Japanese government.

K.J. Noh: Prime Minister Shinzo Abe is the grandson of Japan’s postwar Prime Minister, Nobusuke Kishi, a class-A war criminal, and is the figurehead of the hyper-nationalist Liberal Democratic Party faction that would like to see Japan restored as a global imperial superpower. Because of this, Abe has made Japanese historical denialism official government policy, launching a massive global PR campaign to “correct” the world’s understanding of Japan’s colonial and WWII history.

Abe has also come out with some very bellicose statements against North Korea and is a big proponent of military action. Recently he wrote an op-ed for The New York Times in which he misrepresented the history of nuclear negotiations with North Korea, arguing that diplomacy will not work. He writes that, “Prioritizing diplomacy and emphasizing the importance of dialogue will not work with North Korea.”

In order to back up his argument, he lies about the breakdown of the 1994 agreed framework, which effectively stopped the North Korean nuclear program until 2002. He fails to mention that the framework contained promises to normalize relations with North Korea, to remove trade barriers, and to enact a non-aggression pact, and that none of these conditions were upheld by the US. He glosses this over and then makes the argument that there is no possibility of dialogue. 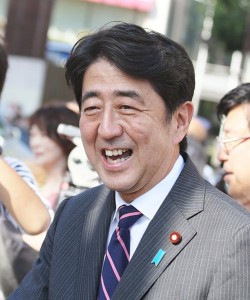 Interestingly, in this op-ed, Abe mentions the abduction of a young Japanese girl by the North Koreans as proof of how immoral and unethical they are. What is interesting is that the North Koreans have acknowledged abducting between thirteen and seventeen Japanese citizens and condemned those actions, although they have not given formal reparations yet. But to this day, Abe has not even acknowledged the abduction of between 200,000 and 400,000 young women and girls from Korea and the colonies.

Dennis Bernstein: Last week a memorial was unveiled in San Francisco to the Comfort Women, over the vehement opposition of the Japanese government.

Lillian Sing: I was born in Shanghai, China, where over 200,000 girls and women were kidnapped and forced into sexual slavery. As an Asian-American woman, I will not be silenced. How can I not get involved, when my sisters were kidnapped and raped over and over again–sometimes over eighty times a day?! What is most heinous is that the Japanese government has refused to recognize their role in these crimes. Justice delayed is justice denied. Over 400,000 Comfort Women were kidnapped, and now there are only a few dozen left.

Dennis Bernstein: Could you describe the multiple struggles you faced getting this memorial constructed?

Lillian Sing: Japan is very afraid of the truth. It even went before the US Supreme Court to block a memorial in Glendale of a little girl sitting on a chair. It feared that that memorial would interfere with Japanese/US relations. Now the mayor of Osaka has threatened to break off its sister-city relationship with San Francisco if a memorial is erected there. The Japanese government is now accusing China of being behind this, of trying to drive a wedge between South Korea and Japan over this memorial.

Julie Tang: I think it is extremely insulting to the victims for the Japanese leadership to be blaming everybody but themselves. First it claimed that these women were willing prostitutes. Now they are pointing fingers at China. They are saying that Judge Sing and I are essentially puppets of the Chinese government, that we are attempting to drive a wedge between South Korea and Japan in their efforts to contain North Korea.

K.J. Noh: The key thing to re-emphasize is that Japan was a fascist military dictatorship with a wartime command economy that controlled every aspect of procurement, distribution and recruitment of all material, including human labor.

We know for a fact that these women were trafficked over thousands of miles, all over the colonies. There are documents that requisition thousands of girls, who were often procured and delivered in short periods of time. These actions would not have been possible without coordinated government actions.

Another point to highlight is that this was not simply the largest case of sexual trafficking, it was also an unprecedented femicide. Between 75-90% percent of these women died during their sexual enslavement. That makes it a modern femicidal holocaust.

The Japanese government has never taken any responsibility for this. From time to time they make generic statements of remorse which mean nothing. They refuse to recognize, take responsibility, and to make any reasonable official reparations. And they have refused to ratify any of their apologies in the Japanese Diet, which is what would be necessary for a state apology.

A memorial is actually a poor substitute for what is really needed, which is justice, reparations, education and apology. A monument is just a small symbolic gesture against a backdrop of one of the most extraordinary cases of silencing in modern history.

The Western human rights complex has had a very selective attention, including in the case of the Comfort Women. That is because it is largely driven by imperial geopolitical design. We see that with the statements of the State Department, of Wendy Sherman in particular, who poo-pooed the whole Comfort Women issue, saying they needed to get over it and it shouldn’t be used for nationalistic purposes, and the statements of Anthony Blinken, who urged that South Korea get behind the absurd, fraudulent 2015 “agreement”, the written text of which can be found nowhere. The memory of the Comfort Women is something that needs to be highlighted but is being erased.

Lillian Sing: San Francisco is being threatened not to accept this memorial. We want to make sure that San Francisco does not allow itself to be threatened in this way by its Japanese counterpart. Mr. Abe makes annual visits to the Yasukuni Shrine to honor class-A war criminals. We in San Francisco would like to have a memorial to honor the war victims. Our memorial is for peace, not war. And there will be no peace in Asia without Japan apologizing.

Julie Tang: I’d like to invite people to visit the memorial. Actually, it is not yet open to the public but we hope it will be soon, with the help of the mayor and the board of supervisors.