As the Mexican earthquake becomes the latest natural disaster to hit the Western Hemisphere, the role of civil society — especially the first responders — has demonstrated the best of human nature, as Dennis J Bernstein reports.

On Thursday, rescuers in Mexico City continued to dig through the rubble of many downed buildings, attempting to pull survivors out of the wreckage from the deadly 7.1 magnitude earthquake that rocked the city on two days earlier.

Scores of survivors have already been pulled out of the rubble of various disaster sites all over the sprawling city. The quake has taken the lives of over 230 people with thousands more injured.

First responders and volunteers dug through the rubble of a collapsed school in the southern part of the city for children buried in the fallen books and bricks. Reuters reported early Thursday that “eleven other children were rescued from the Enrique Rebsamen School, where students are aged roughly six to 15. Twenty-one children and four adults there were killed.”

I spoke to Flashpoints Special Correspondent Molly Goss in Mexico City about the impact of the quake and the special role civil society has played and is playing in the rescue and recovery efforts. Goss herself was trapped in a building after the quake but managed to escape with co-workers. I spoke to Goss on September 20.

Dennis Bernstein: Molly, you yourself were trapped in a building after the quake. Essentially you were stuck inside a building and couldn’t get out. We are glad you are safe now.

You were saying earlier that the quake came only hours after the whole city had done drills and a remembrance of the massive 1985 earthquake that killed thousands of Mexicans.

Molly Goss: It was incredible, because two hours earlier we had done the drills that are performed every September 19, here in Mexico City, to commemorate what happened in 1985. We were able to get out of the building fine during the drill but later the door jammed and prevented us from getting out.

DB: We know now that over 225 people have been killed, including at least 21 children and five adults who died when a primary school collapsed in Mexico City. The collapse of buildings has become essentially a pandemic in the city. Talk a little bit about what is going on in the streets.

MG: I live in an area that was pretty badly affected by the quake. The southern part of the city was probably worst affected but some of the central parts were also hard hit. One of my neighbors was outside his house trying to call attention to the fact that the structure was actually swaying a little bit. He said he had called the emergency number, he had called the police, but no one was paying attention to his pleas for help.

Especially in the older parts of the city, there are buildings which were built long before the new regulations passed in 1985. You can see cracks in many of the buildings. A couple blocks from where I live you can see where the pavement has been lifted about six inches off the ground.

The thing that has really struck me is that the authorities are out in the streets but civil society is the main contingent helping people, getting people out of the rubble. There are still children in that school you mentioned. There are buildings all over the city that are in danger of collapsing. Some are camping out in the streets but others have no choice but to go back into their homes. It is a really precarious situation for tens of thousands of people here in the city.

DB: When you talk about civil society stepping up, who are you talking about and what has the response been like?

MG: What you mostly see are young men and young women. Many are not associated with any particular group. They put on yellow and orange vests, take their shovels and anything else that can help them get people out of the rubble, and go to these sites. Social media has helped a lot by sending people to where they are most needed.

There is one organized group that are experts at getting people out of the rubble. There have been a lot of comments about how their protocols and procedures are much better than the army and police. We are seeing an incredible amount of solidarity. 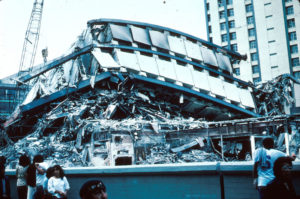 Destruction of the Pino Suarez Apartment Complex in Mexico City after the earthquake on September 19, 1985. (US Geological Survey)

DB: The official word from the Mexican government is that they learned a great deal from the big earthquake in 1985 and this time they were ready and out there doing what they needed to do. That is a bit of a different spin.

Nevertheless, the situation is tenuous and at a certain point there is going to have to be a major evaluation of thousands of buildings in the city. This is a huge problem that doesn’t appear to be acknowledged by the Mexican government.

MG: There have been laws and regulations passed since 1985. But there is a lot of corruption in city government and federal government; kickbacks are paid and buildings are not built in the way they are supposed to be. After a school collapsed close to here, you could see that parts of the building had been constructed of Styrofoam!

Another change that has taken place since the 1985 quake is the earthquake alert system. In the quake that occurred two weeks ago, the alarms went off and many were able to evacuate their buildings. But there is definitely still a lot of progress to be made. These older buildings cannot withstand a 7.0 earthquake or above.

DB: You walked around the streets of Mexico City after the quake hit. What are some of the images that stay with you?

MG: I walked down one of the busiest thoroughfares of the city and saw tens of thousands of people completely filling the street. I saw many people directing traffic. The city was in absolute chaos but people really stood up to prevent things from getting too insane.