Unless President Trump can pull off a peace deal with the Taliban, his Afghan War policy is following the same bloody and futile path that his predecessors took, as ex-CIA analyst Paul R. Pillar describes.

President Trump’s statement on Afghanistan has numerous shortcomings. It portrays as a “new strategy” what is instead a familiar kicking of a can down the road. It combines Trump’s habit of heaping blame on his predecessors with a warmed-over version of what those predecessors did in Afghanistan.

It declares a determination to “win” while leaving one guessing as to exactly what a win would mean in Afghanistan. It fails to address underlying problems of governance in that country. It gives no basis for expecting or even hoping that the U.S. military expedition there will not go on forever.

Added to these features is a further notion that Trump shares with many others, including observers who in other respects are critical of his policy. This is the idea that there is a direct connection between extremists having a physical presence in a distant land and the United States facing a terrorist threat at home.

Trump used the term safe haven four times in his speech. He declared that the basic purpose of the military expedition in Afghanistan was, “We must stop the resurgence of safe havens that enable terrorists to threaten America.”

One hears this same idea over and over. The current U.S. military commander in Afghanistan, General John W. Nicholson, Jr., says, “The requirement to keep pressure on these terror groups to prevent another attack on our homeland .?.?. fundamentally, that is why we are here.” Such statements — and not only about Afghanistan — are minor rephrasing of the old notion of “fight them over there or else we’ll have to fight them at home.”

That notion is not valid, and never has been. The very physical distance involved works against the relevance of foreign havens to terrorist threats against the homeland. One cannot drive a truck bomb, or even the ingredients for one, across the Atlantic Ocean. To the extent any physical space is required to prepare a terrorist attack, a house or apartment in or near the city being targeted is — as a long history of terrorist incidents has demonstrated — much more useful to terrorists than a piece of real estate on another continent.

Very little safe space of any sort is required for high-impact terrorism. After the recently discovered terrorist cell in Spain suffered the mishap of accidentally blowing up the house they were using in a Catalonian village to prepare explosives, they turned to the no-space-required technique of renting vehicles and using them to run down people in the street — the most popular terrorist modus operandi in the West in recent months. As for the terrorist-related functions of recruitment and operational coordination, most of that occurs not in any physical space but in cyberspace.

Even if the idea of a foreign safe haven being critical to international terrorist operations were valid, it could not be a sound basis for justifying a military expedition in any one country. Havens are fungible, and extremists driven from one place can set up shop somewhere else. The focus on Afghanistan is a historical legacy of one group’s operations in the past, which in turn were a legacy of an anti-Soviet insurgency in the even more distant past.

The current prime foes in Afghanistan, the Taliban, are not an international terrorist group and never have been one. The Taliban are instead narrowly focused on political power and the nature of the social order within Afghanistan.

It is true that a patch of foreign real estate may be required for more ambitious operations such as organizing and training a militia. But the world is full of militias that do not threaten the United States, and they certainly should not be equated with terrorist threats to the U.S. homeland.

The establishment of a mini-state on Iraqi and Syria territory by the so-called Islamic State or ISIS raises the further issue of how such a seizure of territory might inspire radicalized individuals elsewhere. But the inspiration depends more on ideology and grievances than on a territorial presence, as has been demonstrated by ISIS-inspired terrorism in the West that has continued and even increased while the mini-state has been getting crushed.

The persistence, especially in the minds of Americans, of the erroneous notion about safe havens and terrorism has much to do with 9/11, its searing effect on the American consciousness, and Al-Qaeda’s past residency in Afghanistan. But the notion is a misreading of that piece of history, even without getting into overlooked details about phases of the Afghan civil war and the nature of the relationship between Al-Qaeda and the Taliban. Most of the preparations for the 9/11 operation did not take place in Afghanistan; most took place in the West, including in apartments in Hamburg, hotels in Spain, and flight schools in the United States.

The safe haven notion also has become a convenient mantra to cite as a rationale for continuing U.S. military involvement in Afghanistan for other reasons. Those reasons may include fear that if a pullout from Afghanistan were followed by a major anti-U.S. terrorist attack, domestic political opponents would make a rhetorical connection between the two whether the connection were valid or not. And the more the mantra is recited, the more believable such alleged connections sound to the public.

More general habits of thought, especially American habits, are also in play. One is a tendency toward spatial thinking that associates good guys and bad guys with different places on a map. There is a tendency to imagine a Mordor whether one exists or not. A further American tendency is to equate solving a security problem with an overseas use of military force. Related to that is the American view of terrorism as primarily a foreign threat, notwithstanding the nature of most terrorist attacks within the United States since 9/11. 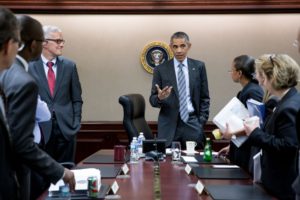 An unfortunate effect of the persistent notion about terrorist safe havens is not only costly and unnecessary military expeditions; the notion also worsens the terrorist threat itself. The overseas deployment of U.S. military forces provides a major motivation for anti-U.S. terrorism. The collateral casualties and damage that inevitably result from operations by those forces accentuate the grievances that underlie such terrorism.

A relevant reminder about this comes from an incomplete and misleading passage in Trump’s speech about Afghanistan. He referred to Iraq and asserted that “the vacuum we created by leaving too soon gave safe haven for ISIS to spread, to grow, recruit, and launch attacks.” What he did not mention was that ISIS did not exist before the United States invaded Iraq in 2003. The group arose, under a different name, as a direct result of the invasion and of the warfare within Iraq that the invasion ignited.

And lest we forget, a major part of the campaign to sell the invasion to the American public involved the fear of terrorism, the specter of dictators giving weapons of mass destruction to terrorists, and the idea that if we don’t fight the bad guys over there they will attack us at home.