When Islamic extremists drive vehicles into crowds in Europe, the lethal attacks are condemned as terrorism, but President Trump took a more lenient view about a similar attack in Charlottesville, as Dennis J Bernstein notes.
By Dennis J Bernstein

Around the world, many people are confounded by the fact that the kind of terrorism that has been loudly decried in France, Great Britain and across the Middle East is being downplayed, indeed almost condoned, by the President of the United States. 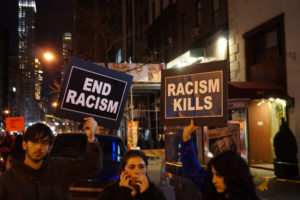 Protesters at a rally in NYC in support of Ferguson, MO. November 25, 2014. (Photo by The All-Nite Images Flickr)

Heavily armed neo-Nazis and Ku-Klux-Klanners descended on Charlottesville,Virginia, last weekend to intimidate the community into reversing a decision to remove a Confederate statue. The violence included one right-wing extremist plowing his car into a crowd of counter-protesters, killing Heather Heyer and injuring at least 19 others, the same kind of attack that has occurred in Europe and drawn denunciations as terrorism.

I spoke with Ai-jen Poo, Executive Director of the National Domestic Workers Alliance, about the recent violence and how the surge in racism is affecting the people whom she represents. Ai-jen Poo was named as one of TIME magazine’s 100 Most Influential People in 2012, and a MacArthur Genius Fellow in 2016.

Dennis Bernstein: Let me ask you, what was your initial reaction as you began to hear what was going on?

Ai-Jen Poo: It was terrifying to see the images of these white supremacists carrying torches. It was a reminder of the depths of racism that still exist in our country. The white supremacist movement has been emboldened and encouraged by the right-wing media. I think we have
our work cut out for us.

I was deeply moved by the people of Charlottesville who came out and counter-rallied. And then seeing over 600 vigils and rallies held across the country against white supremacy and for peace. So I think what we are seeing is the horror of white supremacy in this country but also an upsurge in justice-seeking and saying “this is not who we are as a country.”

DB: Among those standing up was not the president of the United States.

AJP: We have seen an incredible upsurge in hate violence. The Southern Poverty Law Center and other organizations has documented a clear increase in hate-motivated attacks since the Trump campaign, before the administration took office.

Even during the campaign he refused to disavow his relationship with David Duke. Known white supremacist leaders were part of his campaign. Among our membership, we have seen an incredible rise in attacks. Over 70,000 people have been deported since the inauguration. Civilians are emboldened to turn their energy toward hateful, racist attacks on everyday people of color in the community.

DB: Could you describe the kinds of attacks we are talking about?

AJP: One of our members, a housecleaner, was on her way to work when someone got right up into her face, screaming that she should go back to her country and asking to see her passport. We have seen a lot of emotional attacks such as these in broad daylight.

DB: The attorney general has said that he is opening up a civil rights investigation into whether this was a terrorist act. Does this look any different from when the car in France drove into a crowd or the various car-rammings in England?

AJP: Since September 11, there have been about thirty attacks carried about by white terrorists, including the murder of nine people at the church in Charleston two years ago. This is no different from that. This is threatening our national security, threatening the moral fabric of our country. When the country is under attack, I think we need to respond appropriately.

At the National Domestic Workers’ Alliance, we are dedicated to building a healthy, multiracial democracy that values and protects the humanity of every single person in this country. We took part in the vigils that happened over the weekend and there are going to be hundreds and thousands more of those. 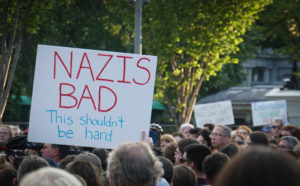 Candlelight vigil at the White House for the victims of the Charlottesville, VA protest. August 13, 2017. (Flickr Ted Eytan)

We are going to be doing a lot of education around the country about the far-right and the white supremacist agenda. We are going to give people and communities tools to understand and talk about what is happening and understand their own agency in being a part of the solution. That means showing up for each other and challenging racism when we see it. We have to really protect vulnerable communities who are targets of this neo-Nazi aggression.

DB: Are you concerned that somebody like Steve Bannon has the president’s ear, that this might actually be considered a good thing for the Republican Party?

Whether it is marching, whether it is attending vigils, whether it is signing on to petitions, we must aggressively take a stand. The vast majority of Americans are opposed to this sort of far-right terrorism and we must be vigilant and we must take care of each other.

43 comments for “Reflections on the Charlottesville Attacks”