Exclusive: By defending “beautiful” Confederate statues, President Trump shows how little he understands about the evils of slavery and the cruelty on lynchings and segregation, but he is by no means alone, writes Robert Parry.

The blindness of President Trump regarding racial bigotry – and indeed that of many white Americans – is that whatever they say to the contrary, they really don’t appreciate the evils of slavery or the ensuing century of lynchings and segregation.

And, much of that ignorance comes from the systematic rationalizing and romanticizing of the ante-bellum South while shielding from criticism many of slavery’s historical apologists, including both Confederate “heroes” and earlier icons such as Thomas Jefferson who became a staunch advocate for expanding slavery all the better to increase his financial bottom line.

Although I grew up in Massachusetts in the 1950s and 1960s, our “history” textbooks could easily have passed muster in the Deep South. They treated slavery as an unfortunate feature of America’s past but not really all that bad, an institution in which most slave owners were kindly masters but a few employed cruel overseers who committed some isolated abuses like whippings.

And, if that recollection of my grade-school experience sounds hard to believe, just watch the 1939 movie classic “Gone with the Wind,” which presents Tara’s plantation slaves as mostly content with their enslavement and loyal to their masters. That was pretty much what Americans were taught for generations and explains why the 1977 TV miniseries “Roots” was such a shocking event, because it showed the systematic cruelty of slavery from the perspective of the slaves.

By 1980, the decades-old “conventional wisdom” about the quaint-and-misguided-but-mostly-okay institution of human bondage was shattered not only by TV’s dramatic portrayal of slavery but also by sound historic scholarship, which gained greater attention due to the Civil Rights Movement and growing popular resistance to “patriotic” propaganda.

Still, many white Americans rejected the notion of white guilt for those past crimes and rallied to Ronald Reagan’s crude caricatures about “welfare queens” and people who used food stamps to buy vodka and other luxuries. While Reagan was careful not to say outright that he was referring to blacks, he didn’t have to because his listeners understood the coded messages. 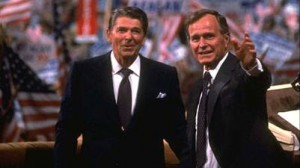 Similarly, when Reagan’s Vice President George H.W. Bush ran for and won the presidency in 1988, he exploited the story of Willie Horton, a black convict who raped a white woman while on a Massachusetts prison furlough that Bush blamed on his Democratic rival, Massachusetts Gov. Michael Dukakis.

Indeed, the Republican Party had been playing the race card since Richard Nixon’s Southern Strategy of 1968. It’s not a coincidence that this racial messaging swung the Democrats’ once-solid South overwhelmingly into the Republican electoral column.

So, it’s a bit ironic when the U.S. mainstream media cites Republicans who have benefited from these race-baiting dog whistles as responsible leaders when they decry Trump’s slightly more overt appeals to white nationalists and other racists. On the immediate issue of Confederate statues and other honors, the Republicans have long led the way in protecting these tributes to white supremacy under the guise of “defending history.”

On Thursday, Trump retreated to that safer GOP position after days of criticism for his rhetorical excuse-making and moral equivalence following  last Saturday’s violent rally by neo-Nazis, the KKK and white nationalists in Charlottesville, Virginia, in defense of a Confederate monument to Gen. Robert E. Lee, which the local government had voted to remove.

Trump tweeted: “Sad to see the history and culture of our great country being ripped apart with the removal of our beautiful statues and monuments. You can’t change history, but you can learn from it. Robert E Lee, Stonewall Jackson – who’s next, Washington, Jefferson? So foolish!”

But that is the classic defense of neo-Confederate racist thinking. The pretense is that these monuments and other honors are simply a recognition of history when they were clearly intended to glorify the Confederacy and its rebellion against the United States over the Southern fear that slavery would be abolished and the wealth of plantation owners effectively negated.

Most of these monuments were erected in the Twentieth Century, often as symbolic rebukes to progress being made by the descendants of African-American slaves. These were monuments to white supremacy — and for Trump and other white Americans to pretend otherwise is anti-historical nonsense.

Beyond monuments, other public spaces were named after Confederate leaders. For instance, in the 1920s – at the height of the Jim Crow era as lynchings were used to terrorize black communities energized by the return of African-American soldiers from World War I – the Daughters of the Confederacy succeeded in attaching the name of Confederate President Jefferson Davis to sections of Route 1, including in Arlington County, Virginia, near predominately black neighborhoods.

In 1964, as Martin Luther King Jr. and the Civil Rights Movement gained passage of a landmark civil rights law, the Virginia legislature added Jefferson Davis’s name to a section of Route 110 that passed by the Pentagon and near Arlington National Cemetery, which was begun in the Civil War to bury dead Union soldiers, including black troops who joined the Army to fight for their freedom.

On Jefferson Davis’s authority, Confederate soldiers were permitted to summarily execute African-American Union soldiers upon their surrender, a practice that was carried out in several notorious massacres, such as at Fort Pillow, Tennessee, on April 12, 1864; the Battle of Poison Springs, Arkansas, in April 1864; and the Battle of the Crater in Virginia. Scores of black prisoners were executed in Saltville, Virginia, on Oct. 2, 1864. It should be noted that the Confederate troops of Virginia were under the command of the esteemed Gen. Robert E. Lee.

A few years back, I wrote to the five members of the Arlington County Board and urged them to rename Jefferson Davis Highway. When my letter went public, it was treated with some amusement by the local paper, the Sun-Gazette, which described me as “rankled,” and prompted some hate mail.

One angry letter from an Arlington resident declared that it was now her turn to be “RANKLED by outsiders like Mr. Parry who want to change history because it is not to his liking. I am very proud of my Commonwealth’s history, but not of the current times, as I’m sure many others are.” Those current times included the election of Barack Obama, the first African-American president.

I was even confronted by a senior Democratic county official at a meeting about a different topic and urged to desist in my proposal to give the highway a new name because the idea would alienate state politicians in Richmond who would think that “liberal” Arlington County had gone crazy.

However, since a number of Arlington residents apparently shared my disgust over Jefferson Davis Highway, the county board eventually agreed to send a request to the state legislature that the road’s name be changed, but it was clearly not a priority for the board or for other Virginia Democratic officials who feared offending pro-Confederate voters (although in the wake of the bloody Charlottesville riot, Gov. Terry McAuliffe has finally come out in favor of removing the monuments honoring the Confederacy).

The dishonesty of Trump’s “history” argument – and its well-worn use by Confederate apologists – is underscored by the obvious fact that statues and other honors are meant to transform historical figures into icons to be emulated. Governments do not bestow these honors on criminals or traitors just because they are historical figures.

You don’t see many government statues to Al Capone or Benedict Arnold. And, Americans would be rightly alarmed if Germany began erecting statues to Adolf Hitler and his Nazi henchmen. So, to pretend that these Confederate statues are not meant to glorify the South’s battle to protect the institution (or industry) of slavery is simply a lie.

Arguably, Trump does have a point about the historical ambiguity surrounding the nation’s Founders, many of whom owned slaves although Trump’s argument amounts to another rhetorical dodge. There is a distinct difference between George Washington who led the War for Independence, presided at the Constitutional Convention and served as the first President (and who grew increasingly uncomfortable with slavery) and the Confederates who turned their guns against the United States in a disastrous war to protect the interests of slaveholders.

In any evaluation of history, distinctions must be made. Nobody is perfect. Even Founders who were opposed to slavery, such as Alexander Hamilton and John Adams, can be rightly criticized for other political positions that they took as the United States sought to find its footing in its early years.

More troubling is the legacy of Thomas Jefferson, who is hailed for penning the Declaration of Independence and its noble words that “all men are created equal” – although Jefferson in his other writings, such as Notes on the State of Virginia, made clear that he did not believe that at all. Jefferson was a hypocrite of the first order. 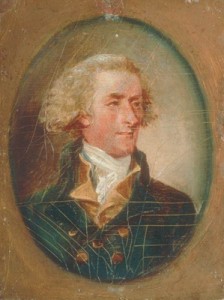 Thomas Jefferson, the principal author of the Declaration of Independence and the third president of the United States.(in a 1788 portrait by John Trumbull, credit: Thomas Jefferson Foundation)

Recent historical revelations also reveal Jefferson to have been a much more ruthless slave master than his admirers have wanted to believe. He countenanced the whipping of boys, calculated the financial value of child-bearing females, and apparently helped the “breeding” along by imposing himself sexually on one and likely more of his slave girls.

Also, left out of many Jefferson biographies is why he established the University of Virginia in Charlottesville. It wasn’t simply his devotion to learning; he feared that young Southern aristocrats going north to school would be contaminated by the arguments against slavery and in favor of a strong national government, twin evils that the erudite Jefferson called “‘anti-Missourism,’” and “Consolidationism.”

Further contributing to the nation’s divisions, Jefferson propounded theories about state secession and pushed for expansion of slavery throughout the Louisiana Territories. In his later years, he became what you might call a pre-Confederate. [For details, see Consortiumnews.com’s “Thomas Jefferson: America’s Founding Sociopath.”]

Still, even in his hypocrisy, Jefferson deserves credit for enunciating what would become an important American contribution to global human rights, the proposition that governments should treat all citizens equally, a principle that Martin Luther King Jr. and other civil rights leaders wielded in their own battles against racial injustice.

Despite their faults, to put Washington and Jefferson on the same historical plane as Jefferson Davis and the Confederates makes a mockery of historical distinctions.

That the United States would honor people responsible for a horrific war designed to perpetuate slavery – leaders who authorized the outright murder of unarmed soldiers just because of the color of their skin – should shock the conscience of any moral human being although apparently not President Trump.